Earlier we looked at the base of the amniota and the phylogenetic miniaturization that preceded and succeeded basalmost amniotes. Today we’ll take a closer look at the one key trait that defines the Amniota.

Eggs and Embryonic Development
All morphology aside, the single key trait that defines the Amniota is the production of eggs surrounded by extraembryonic membranes and large enough to sustain the development of the developing embryo until it hatches beyond the gilled aquatic stage. Initially such an egg must have been small enough to maintain its shape and integrity out of water during the gradual evolution of those extraembryonic membranes (Carroll, 1969).

Phylogenetic bracketing shows the evolution of the amniotic egg had its genesis in the Viséan (~345 Ma), likely with a sister to Silvanerpeton and Gephyrostegus bohemicus, (the latter known from the Westphalian, 310 mya). Earlier and more derived amniotes are also found in Viséan strata. These include Westlothiana, Casineria and Eldeceeon (Fig. 1). So the origin of the amniotic egg precedes them all.

The anamniote outgroup taxa, Seymouria, Kotlassia and Utegenia (Fig. 1), all known from much later time periods (Permian), had juveniles with external gills (Laurin, 1996; Klembara et al., 2007), and so did not produce amniotic eggs. None of the recovered basal amniotes had juveniles with gills and sensory grooves. Carroll and Baird (1972) considered the small basal amniote Brouffia (Westphalian, Fig. 1) a juvenile. It had no external gills or sensory grooves. Klembara et al. (2014) considered Gephyrostegus watsoni (Fig. 1) a juvenile anamniote, but it, likewise, has no external gills or sensory grooves. Rather it nests between Eldeceeon and Solenodonsaurus in the Archosaurmorpha branch of the Amniota.

Amniotes more derived than G. bohemicus also develop a second sacral vertebra. Since these ‘second generation’ basal amniotes are generally much smaller overall with shorter limbs (Fig. 1), the second sacral rib comes as something of a surprise—unless it was used to help support the greater weight and mass of gravid females.

Only female basal amniotes?
Notably, no gender differences have been identified in basal amniote skeletons. Either basal male amniotes also lacked posterior dorsal ribs and had a deeper pelvic opening and/or basal amniotes reproduced by parthenogenesis (reproduction without males), as certain living lizards do (Lutes, et al., 2010). It could go either way. 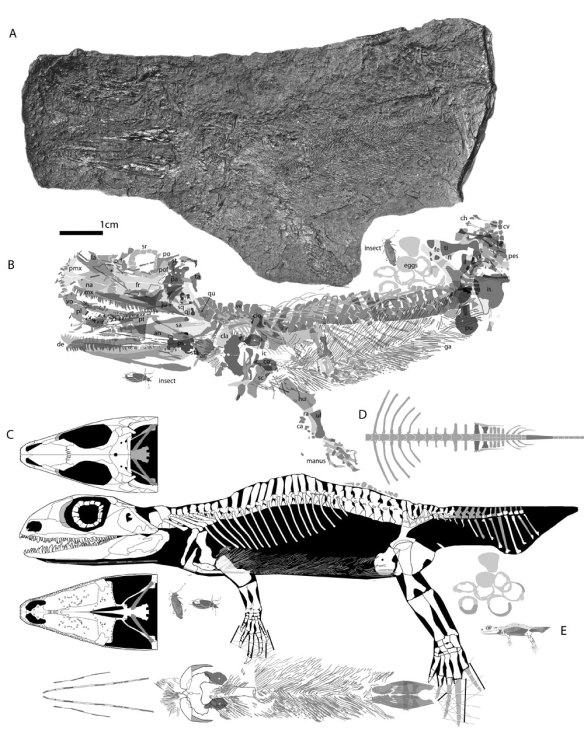 Figure 2. Click to enlarge. Gephyrostegus watson (Westphalian, 310 mya) in situ and reconstructed. The egg shapes are near the hips as if recently laid. A few insects appear in the matrix. The carpals and tarsals are present, just displaced. So are the tail chevrons. The embryo (E) is hypothetical based on egg shape and size.

Westphalian amniote eggs?
In the basal amniote Gephyrostegus watsoni (Fig. 2, but this taxon needs a new name because it doesn’t nest with the holotype of Gephyrostegus) eight irregular flattened sphere shapes, each 5mm in diameter (five percent of the adult snout/vent length), appear dorsal to the open ‘lumbar’ area. If they were eggs they are the right size to pass through the pelvic opening. Preserved beyond the confines of the mother’s abdomen, the mother could have moved slightly just after depositing her eggs, shortly before burial. No embryonic skeletons should be expected to appear within such eggs. Instead embryos would have developed after egg deposition, as in many living reptiles. No calcified shell should be expected at this early stage of egg evolution. Examples of similar jelly-like soft tissue preservation in the fossil record are known, as in the Triassic lepidosaur, Cosesaurus (Fig. 4), preserved with a medusa (Ellenberger and de Villalta, 1974).

Click to enlarge and see rollover image. Here DGS, digital graphic segregation, enabled the identification of many more bones than firsthand observation, including the displaced carpals and tarsals, along with a few insects and egg-shapes.

Hatchling size
From 1 cm diameter egg sizes (estimated from pelvic openings) curled up Gephyrostegus bohemicus hatchlings would have been ~2.6 cm in length or one-eighth (12 percent) the size of the mother (Fig. 1).

Figure 3. Click to enlarge and see the rollover. Eldeceeon with a strangely expanded belly (defined by gastralia/scales) that could have contained a load of eggs, traced in green here.

A gravid amniote in the Viséan?
The Eldeceeon holotype was preserved with an oddly expanded belly (Fig. 3). Perhaps this was also a gravid female (Fig. 7) with an egg load that pushed out her ossified ventral scales during postmortem decay and/or crushing. I’ve traced some possible eggs shapes found in the matrix.

Smaller ‘second generation’ basal amniotes, like Westlothiana and Casineria (Fig. 3), would have had proportionately smaller eggs. 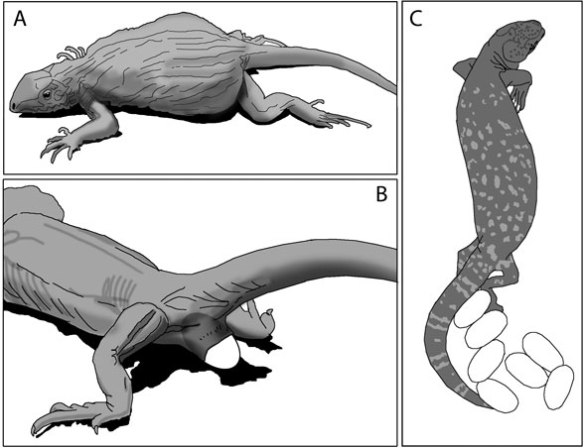 Figure 4. Extant lizards, A. gravid, B. in the process of laying eggs, C. with egg clutch.

Living examples of gravid females
Extant lizards (Fig. 4) show the extent of belly-stretching in gravid (pregnant) females and the relatively large size of their eggs. A clutch can be about the size of the mother’s eggless torso.

Basal amniote paleobiology
With short, sprawling fore limbs, a weak tail and a large head, Gephyrostegus watsoni (Fig. 2) was likely slow and secretive, like the living Sphenodon, both in leaf litter and in shallow puddles. This would apply even more so to massively burdened gravid females (Fig. 4). Without obvious defenses or weapons, the key to basal amniote success appears to have been an increase in the production of large eggs laid safely out of predator-filled swamps. The East Kirkton (Viséan) and Nyrany Basin (Westphalian) environments were swampy coal forests, so these would have provided the humid air, damp earth, wet leaf litter and abundant puddles needed for basal amniotes to slowly evolve keratinized skin and membrane enclosed eggs. The large orbit of basal amniotes suggests a nocturnal niche. Perhaps they hid and slept during daylight hours, avoiding evaporative sunlight and diurnal predators.