Figure 1. Spinosaurus from Ibrahim 2014. Yes, the proportions are correct. It’s a non bipedal swimming theropod. The red bones are known. The gray ones are hypothetical.

Generally I avoid all but the most basal dinosaurs.
However, just a few posts ago we looked at Spinosaurus and Arizonasaurus, two archosauriformes with a similar dorsal sail.  Well, it seems the proportions of Spinosaurus were a little off in the hind leg department. And that makes the new data fascinating.

And POP there goes a paradigm
The Spinosaurus tale has been told by Nat Geo, Science, Nature, and other places. I found the reaction to this heretical pile of facts just as fascinating. There was shock. And there were skeptics! (something I’ve grown accustomed to from the first vampire pterosaur abstract onward).

Skeptics are good. But facts are facts.

From the Abstract
We describe adaptations for a semiaquatic lifestyle in the dinosaur Spinosaurus aegyptiacus. These adaptations include retraction of the fleshy nostrils to a position near the mid-region of the skull and an elongate neck and trunk that shift the center of body mass anterior to the knee joint. Unlike terrestrial theropods, the pelvic girdle is downsized, the hind limbs are short, and all of the limb bones are solid without an open medullary cavity, for buoyancy control in water. The short, robust femur with hypertrophied flexor attachment and the low, flat-bottomed pedal claws are consistent with aquatic foot-propelled locomotion. Surface striations and bone microstructure suggest that the dorsal “sail” may have been enveloped in skin that functioned primarily for display on land and in water.

From the Dinosaur Mailing List
There’s something fishy about the new Spinosaurus
“the pelvis and hind limbs are too small.”

Note sure if these questions have been answered
1. Did Spinosaurus knuckle-walk to protect its fore claws? After all, it had to come out of the water, at least to lay its eggs. Perhaps it ventured out only to mud and sand bars as crocs do.
2. Other than display, was the sail used for thermoregulation? Keeping it dry in a hot sun would have allowed it to soak in heat. Wetting it would have cooled the sail by evaporative heat loss.
3. Was the sail used in transportation? If there was a current in the water, the orientation of the sail to the current could have been aligned for minimum impact or at right angles for maximum impact.

When we have missing parts, it is usually okay to fill them in with parts gleaned from sister taxa — until the actual parts become found. Then we have to give up our cherished paradigms and let the facts speak for themselves.

History of Spinosaurus with old reconstruction of long hind limbs

Earlier Thadeosaurus (Carroll 1981, Figs. 1-3) nested close to protorosaurs in the large reptile tree (still needs to be updated), as a sister to Tangasaurus at the base of the Enaliosauria. Another look at Currie’s (1984) tracings (Fig. 3), rather than Carroll’s 1981, 1993 reconstruction (Fig. 1), inspired a new reconstruction (Fig. 2) and nested it within the Enaliosauria, on the other side of Tangasaurus, between Thadeosaurus and Acerosodontosaurus. So this new nesting shifts Thadeosaurus a few nodes. Thadeosaurus usually nests with tangasaurs. So everyone is in agreement here.

Figure 1. Original reconstruction of Thadeosaurus from Carroll 1981, 1993. I didn’t find the fused scapulocoracoid. All the specimens separated these elements, but they were all subadults to juveniles. The new reconstruction found more variability in the vertebra and a shallower torso.

At this grade, these basal enaliosaurs show no obvious aquatic adaptations. Rather, Thadeosaurus appears to have been a long-legged sprinter. The skull remains very much like those of basal diapsids. No special features there.

Figure 2. Thadeosaurus reconstructed from bits and pieces over large and small specimens scaled up to the large specimen. Only one of the smallest juveniles preserves any skull bones. Are those sternal plates or posterior coracoids? You have to know the phylogenetic nesting to be sure.

Sometimes you just have to employ more than one specimen to create a chimaera. In this case, Thadeosaurus was reconstructed from several specimens of various sizes (Fig. 3). Hopefully these are all congeneric and conspecific specimens, as reported by Currie (1984). I didn’t see any red flags here. Nothing about the reconstruction is at odds with Currie’s observations.

Figure 3. The various specimens in various sizes, all to scale attributed to Thadeosaurus. If the largest specimen did not have a bone, it was scaled up from the smaller specimens.

Updated September 20, 2014 with a new reconstruction and nesting for this taxon.

Revised skull reconstruction of Tasmaniosaurus nesting at the base of the Erythrosuchia.

The caudal vertebrae are very long, longer than 3x their width, very un-proterosuchid like. Seven in a row have no neutrals spines.

The interclavicle of Tasmaniosaurus is T-shaped with a very long and slender posterior process. Among archosauriforms, only Euparkeria has a T-shaped interclavicle. Many are I-shaped.

The femur and tibia/fibula are short and robust, so no possible biped here and the Early Triassic is a little too early for bipeds.

In phylogenetic analysis (not updated online yet), Tasmaniosaurus nests at the base of the Erythrosuchidae, as a sister taxon to Fugusuchus + Revueltosaurus. So, another miniaturized taxon nests basal to a large clade.

Figure 1. Just move the mandible and maxilla forward so the last tooth is anterior to the orbit (as in other pelycosaurs) and Echinerpeton becomes a long snouted proto-secodontosaur.

Raising my hand to proclaim a nesting error
Earlier (now trashed) I recovered Echinerpeton at the base of the Synapsida and Diapsida, but those elongate dorsal spines seemed odd at that node. Then I noticed that all other pelycosaurs had teeth only in front of the orbit. The skull is largely missing, so there’s no harm in shifting the jaws forward a bit. And suddenly Echinerpeton made more sense.

Echinerpeton intermedium (Reisz 1972), Late Carboniferous, 308 mya. Reisz (1972) tentatively classified Echinerpeton as an ophiacodontid in his initial description, and in 1986 he considered it an indeterminate “pelycosaur“. Benson (2012) could not nest Echinerpeton with certainty, perhaps because he used the wrong outgroups and mistakenly included caseasaurs because he followed tradition without the benefit of a large gamut reptile tree like we have here (Fig. 2). 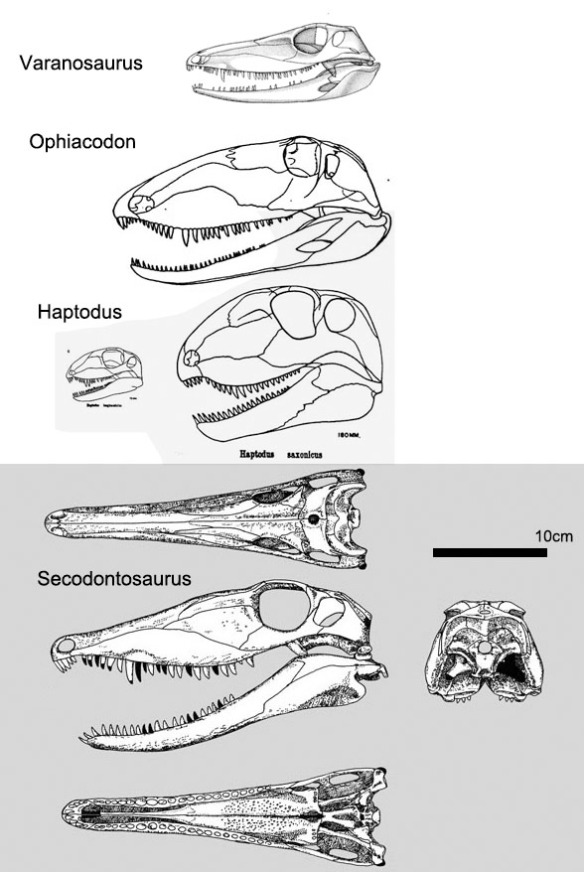 Here Echinerpeton nests with Secodontosaurus. The snout was long because the last maxillary tooth was in front of the orbit. The maxilla was straight while the dentary was concave dorsally. Both were filled with long teeth.

The dorsal spines were long, but not as long as those of Secodontosaurus.The scapula was small and both the humerus and femur were short and slender. The ankle bones were round elements. Together these point to an aquatic, rather than a terrestrial niche. So Echinerpeton was a crocodile-like sphenacodont pelycosaur.