A recent paper
by Costa et al. (2014) illustrated the myology of the pelvic girdle of the large pterosaur, Anhanguera based on 3D digital models of 3D fossils (Fig. 1). 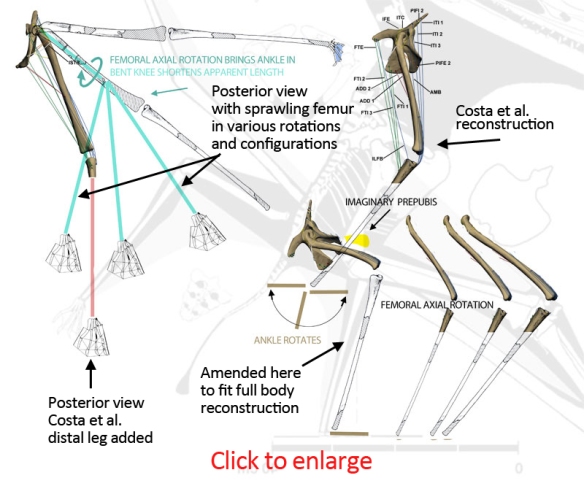 Figure 1. Costa et al. reconstruction of Anhanguera pelvis and femur together with amended versions with sprawling femur. Not sure how the rest of the body was oriented based on the Costa et al. pelvis. Here the pelvis is placed on a body that is balanced whether the hands are on the substrate or not.

Unfortunately,
Costa et al. did not include the rest of the Anhanguera body and leg to show their orientation and configuration works in toto. When you do the add the body, and orient the femur so the axis of the femoral head (Fig. 2) aligns with the axis of the pelvic acetabulum, you get a different configuration (Fig. 1). In the Costa et al. configuration, the femoral head axis is not aligned with the acetabulum axis. And the knee is a little too straight, unlike most tetrapods — except at maximum extension.

If you straighten out the leg, you get the flying configuration.

If you bend the knee and axially rotate the femur, you get the standing configuration, just like lizards capable of assuming or running in a bipedal configuration (Fig. 3). Now I’m not saying Anhanguera was bipedal all the time — but it was indeed bipedal moments before takeoff and moments after landing (prior to wing folding, as in all pterosaurs.)

Figure 3. Click to play video. Just how fast can quadrupedal/bipedal lizards run? This video documents 11 meters/second in a Callisaurus at the Bruce Jayne lab.

Getting back to the feet, legs and pelvis
pterosaurs could still bring their feet close to the midline simply by bending the knee and axially rotating the femur, both of which were very easy to do.

Yes, Anhanguera might have been awkward on land,  but it was rarely on land, based on the evidence of the tiny feet, skinny legs and great big wings.

For those interested,
I just spent the last 6 months working on a reptile paper that was yesterday submitted. Hope it flies. Will try to add some new “heresies” as the days go by, but there has not been that much to discuss in the last few months, oddly enough.

And thank you for your support while I’ve been gone.
Viewership has not decreased. 200 to 400 visitors a day over the past month with no news! Amazing.