www.solnhofen-fossilienatlas.de is a private project building a internet-data-base of the Fossils from Solnhofen with pictures and descriptions. Today we’ll look at their Pterodactylus #1359.  The specimen is housed in a private collection, not Fossnet.

Figure 1. Fossnet Pterodactylus 1359. Such soft tissue preservation is very rare. The question is, do these wing membrane attach to the ankles? Or do they attach to the elbows? Matrix tone changes are due to placing higher resolution images on top of the basic overall image.

The first thing you’ll notice is all that soft tissue, especially the wing membranes and uropatagia. There’s even little strip of hard tissue at the trailing edge behind m4.2. Despite the preservation of the most fragile tissue, the humerus is practically gone, leaving only an impression. 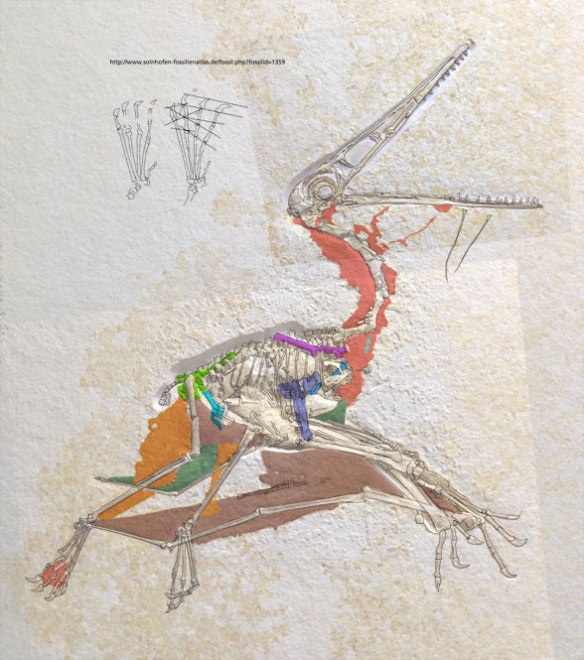 Figure 2. Fossnet Pterodactylus 1359 with soft tissues colorized. Here the uropatagia (orange) are distinct from the two wing membranes (green, brown). Here the wing membranes attach to the elbow contra all those workers who assert without evidence that the wing membrane attached to the ankles. The inner membrane creates a fuselage fillet from elbow to knee/mid-thigh.

DGS (colorized tracing) helps segregate one membrane from another, clarifying the apparent overlaps. This specimen leaves little doubt that the wing membrane was stretched between the elbow and wingtip. There is no membrane present leading toward the tibia, as in ALL other known pterosaurs and CONTRA Elgin, Hone and Frey (2008) and all similar traditions repeated by the current consensus represented academically by Witton, Unwin, Bennett, etc. Still waiting here for one wing membrane undeniably attached to one tibia. All prior candidates were dismissed here.

Figure 3. Click to enlarge. Fossnet Pterodactylus compared to two other related specimens. Though very much alike, note the differences in various bone shapes. These differences split specimens into species. Note the size of the feet is similar despite the varying heights of these pterosaurs.

While some workers consider all Pterodactylus conspecific, those same workers have not reconstructed them, nor have they performed phylogenetic analyses to lump and split therm. Sometimes that’s all you have to do to understand the situation. But most pterosaur scientists do not take this very simple and basic step (Fig. 4).

Figure 4. Closeup of the private Pterodactylus with extensive wing membrane preservation. The humerus, based on an impression of a humerus, is quite short, which makes this specimen distinct, if valid. Also atypical is the alignment of pedal digits 2-4.

So, yes, it’s a Pterodactylus.
But the species is not quite the same as any species previously described.