Updated February 23, 2015 with an updated reconstruction of Mycterosaurus.

Anningia megalops (Broom 1927, Middle Permian, Transvaal Museum N. 4024) is only known from a poorly preserved back half of a skull (Fig. 1). My introduction was through Romer and Price (1940, Fig. 1) as they associated it with sphenacodonts, like Dimetrodon. Later Reisz and Dilkes (1992) considered “available information insufficient to determine taxonomic position or phylogenetic relationships beyond the likelihood that it may be the remains of a pelycosaur.”

Figure 1. Anningia megalops as illustrated by Romer and Price 1940 (below) and in two views from Reisz and Dilkes 1992 with skull element shapes colorized and hypothetical rostrum and jaws added. Remember, the bones are largely missing here. These are impressions of the inner side of the bones.

Comparing Anningia to other candidate taxa brings a pretty close match to Archaeovenator (among tested taxa, Fig. 3), a much smaller and much earlier genus. Broom, Romer and Price and Reisz and Dilkes noted superficial similarities to Mycterosaurus (Fig. 2), which nests close toArchaeovenator, but closer to Heleosaurus.

Figure 2. Mycterosaurus based on Berman and Reisz 1982.

The Middle Permian of Anningia (Tapinocephalus Zone) is later than typical pelycosaur strata in the Early Permian. Archaeovenator of the Late Carboniferous, preceded the Permian. Elliotsmithia, another basal pelycosaur, was also a relic taxon in the Middle Permian. So some of these taxa had a long run.

Broom identified a pre-parietal bone, a bone found otherwise only in gorgonopsians and anomodonts and so thought Anningia was a transitional taxon leading to these.

It’s a mess.
There has been extensive fracturing  and erosion of the skull surface of Anningia, which complicates interpretation. Only impressions of the skull roofing bones are preserved. Reisz and Dilkes found “no sutures to suggest the presence of a pre parietal bone.”

Reisz and Dilkes note: “All the osteological features noted above can be interpreted as primitive features for synapsids, and are consistent with placement of A. megalops within varanopseids. Unfortunately, these features are not diagnostic for varanopseids, but are also present in primitive ophiacodontids.”

Reisz and Dilkes report that most of the critical portions of the skull have been lost because most of the type material (left side of the skull) was destroyed when transverse sections were made of the braincase.

Figure 3. Archaeovenator, a smaller relative of Anningia, itself a synapsid outgroup to the Diapsida. If you think this is starting to look kind of like Petrolacosaurus, you’re right.

Romer and Price reported it had a very short face, even though “the snout has vanished, but the complete lower jaw is present.” Unfortunately that jaw is not shown in Reisz and Dilkes. They report, “Contrary to previous interpretations of this material, we feel that there is insufficient information to determine the length of the complete lower jaw. These earlier interpretations were made before the wide range of jaw proportions of Paleozoic synapsids was known.”

Anningia comes from the same horizon as Galesphyrus capensis (Fig. 4), which is skull-less but Romer and Price repeat Broom’s suggestion that it is of a size that could accommodate the Anningia skull.

No way.
The skull of Anningia is at least as long as the glenoid-acetabulum length. Just check out those scale bars, which are nearly identical in figures 1 and 3. 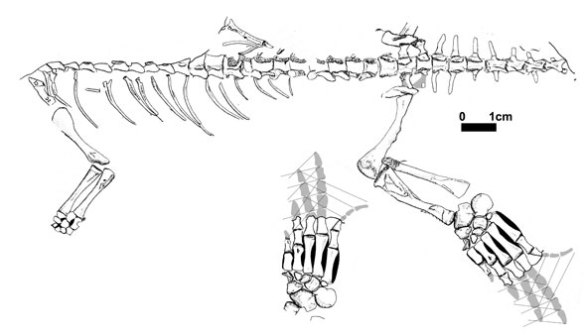 Figure 3. Galesphyrus, a basal probable diapsid (look at the long ulnare and very short pedal digit1) from the same horizon as Anningia. Unless this is a juvenile, the Anningia skull would never mate to this neck.

In the large reptile tree, protodiapsids nest with varanopids (and the entire synapsid clade), as an outgroup, so the paradigm of calling these reptiles varanopids is entirely reasonable — but they are on another branch, not the Varanops branch. This point is overlooked in smaller prior studies that ignore and exclude basal diapsids (because, after all… we’re not talking about diapsids when we talk about synapsids, are we? [sarcastic droll rise of one eyebrow].

References
Berman DS and Reisz RR 1982. Restudy of Mycterosaurus longiceps (Reptilia, Pelycosauria) from the Lower Permian of Texas. Annals of Carnegie Museum 51, 423–453.
Broom R 1927. On a new type of mammal-like reptile from the South African Karroo beds (Anningia megalops). Proceedings of the Zoological Society of London 227-232.
Reisz RR and Dilkes DW 1992. The taxonomic position of Anningia megalops, a small amniote from the Permian of South Africa. Canadian Journal of Earth Sciences 29: 1605-1608.
Romer AS and Price LW 1940. Review of the Pelycosauria. Geological Society of America Special Papers 28: 1-538.