I read this today on Wiki/Archaeopteryx: “Recently, it has been argued that all the specimens belong to the same species, however, significant differences exist among the specimens. In particular, the Munich, Eichstätt, Solnhofen, and Thermopolis specimens differ from the London, Berlin, and Haarlem specimens in being smaller or much larger, having different finger proportions, having more slender snouts lined with forward-pointing teeth, and possible presence of a sternum. These differences are as large as or larger than the differences seen today between adults of different bird species, however, it also is possible that these differences could be explained by different ages of the living birds.”

If that is all that separates one Archaeopteryx from another, it really is time to take another look at pterosaurs.
There are so many Pterodactylus, Pteranodon, Rhamphorhynchus, Germanodactylus, Darwinopterus, etc. etc. etc. that given the same splitting/lumping parameters someone is going to have to come up with a slew of new names.

The problem is, who has the authority?
And if anyone does have the authority, who will recognize, follow and support that authority? That time may have already passed when there were fewer workers setting standards in paleontology. Back in the 1970s the work by Wellnhofer on Solnhofen pterodactyloids (1970) and non-pterodactlyloids (1975) is encyclopedic and widely cited. I’m not sure that someone else in the present day such authority because the professional vacuum that existed then is not present today.

The answer is:
A grad student for his/her PhD dissertation might have no authority, but that doesn’t matter. These least likely candidates are incredibly talented, but largely lacking in experience, which sometimes works to their advantage. And they are always looking for large projects to tackle. This task is enormous and will involve a lifetime of study and restudy. So, maybe the parameters are not narrow enough for a decent thesis.

I suppose lumpers will always fight splitters, and vice versa, like two parents trying to name one child.

On a side note:
Did early amniotes and their outgroups fuse the coracoid and interclavicle? I am having a difficult time locating coracoids, at the same time that the interclavicle appears to be “amply endowed,” if you know what I mean. Here’s an example in Brouffia: (Fig. 2) and Gephyrostegus (Fig. 3). Please send literature refs if you have them.

Figure 2. Brouffia. Is the coracoid fused to the over robust interclavicle, as it would seem? Lit refs please! 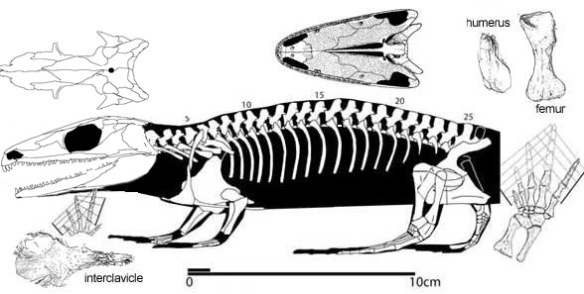