Farlow et al. (2014) has a new paper on the foot of the poposaurid, Poposaurus. 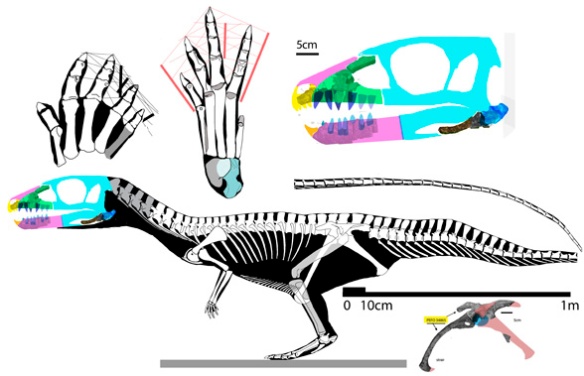 Figure 1. Poposaurus in lateral view. This dinosaur like reptile really is a dinosaur with a calcaneal heel.

From their abstract:
“The crocodile-line basal suchian Poposaurus gracilis had body proportions suggesting that it was an erect, bipedal form like many dinosaurs, prompting questions of whether its pedal proportions, and the shape of its footprint, would likewise “mimic” those of bipedal dinosaurs.

Included is a comparison with other archosaur taxa, (Fig. 1). Note Terrestrisuchus has no calcaneal heel. It develops in the derived Protosuchus and also poposaurid dinosaurs, according to the large reptile tree. 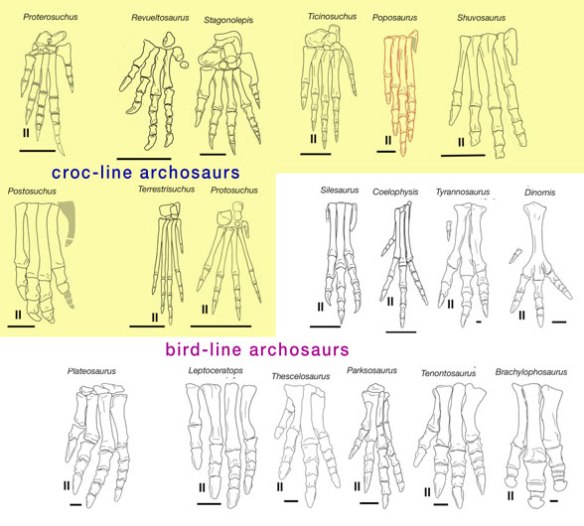 These feet can be reordered according to the large reptile tree (Fig. 2). Though many taxa are missing that would fill in morphological gaps, the general trends are more clear here.

Figure 2. Same feet, reordered according to the large reptile tree. Only Terrestrisuchus and Protosuchus are croc-like archosaurs here. Poposaurs are basal dinosaurs. Silesaurus converged with theropod dinos, as did Brachylophosaurus. Note the lack of a calcaneal heel on Terrestrisuchus, a basal croc and the development of one on Protosuchus. In similar fashion poposaurid dinosaurs developed a calcaneal heel.

On a separate note,
Farlow et al. was kind enough to publish a radiograph of an Alligator. I added PILs and they are quite precise in this living reptile.

Poposaur footprints have not bee found yet. Farlow et al. (2014) reported, “With a digit III length of about 16 cm, Poposaurus gracilis may have been comparable to a small to midrange theropod in overall body size (somewhere between the makers of Anchisauripus sillimani and A. minusculus, in the terminology of Lull [1953]). The dinosaur-like pedal proportions of Poposaurus, and the similarity of its reconstructed footprint to those of some dinosauromorphs, suggest that some grallatorid forms could well have been made by Poposaurus and its close relatives. However, mistaking Poposaurus tracks for dinosaur (particularly theropod) tracks would be less likely to occur if digit I of Poposaurus routinely touched the ground. Furthermore, trackways made by Poposaurus would probably have a shorter stride/footprint length ratio than grallatorid trackways.”

Personal thought
Seems to me that on Poposaurus pedal digit one is going to impress creating a four-toed ichnite.