Dinosaurs became initially successful (at least in part) due to their bipedal configuration (discounting those that later readopted a quadrupedal configuration). Of course, their genesis as bipeds is mirrored by a similar genesis in bipedal crocodylomorpha, also developing tiny to no calcaneal tubers.

Today we’ll look at the evolution of the foot in basal dinosaurs and their immediate precursors (as determined by their nesting in the large reptile tree). The phylogenetic order (Fig. 1) is 1. Decuriasuchus > 2. Turfanosuchus > 3. PVL 4597 4. Trialestes and > 5. Herrerasaurus. 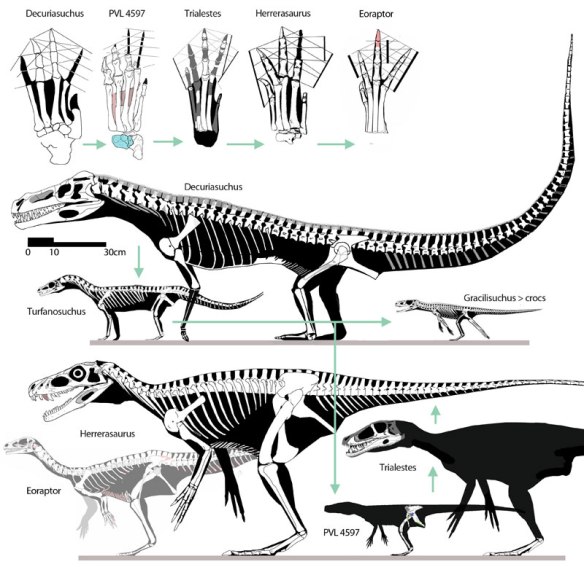 Figure 1. Click to enlarge. The origin of dinosaurs, with a focus on their feet. Here are Decuriasuchus, Turfanosuchus, Trialestes and Herrerasaurus in phylogenetici order (green arrows) and to scale. Note the shortening of pedal digit 1 and the reduction of pedal digit 5. The tarsus (ankle bones) also become smaller in the evolution of dinosaurs. The metatarsals become more closely appressed in only certain dinosaurs, like Eoraptor.

Dinosaurs evolved from basal rauisuchids.
Decuriasuchus is just such a basal rauisuchid, derived from a sister to Vjushkovia and representing a splinter off the main branch of other, more typical rauisuchids, like Prestosuchus. In Decuriasuchus the cervicals were longer. The torso was longer. The tarsus was large. The calcaneal tuber was robust. Metatarsal 5 was hooked and the remaining metatarsals were subequal and not compressed to one another. The toes were longer than in other rauisuchids. These changes represent the first stages toward a dinosaur morphology.

Size reduction produces Turfanosuchus.
Turfanosuchus is a much smaller rauisuchian with relatively smaller head, longer neck, shorter tail and longer limbs. The feet are unknown, despite model reconstructions that show them.

Further size reduction produces Gracilisuchus and PVL 4597.
This is where crocs split from dinos at the base of the Archosauria and a bipedal configuration is only experimental. The torso is shorter. The forelimbs are shorter. The ilium is much enlarged. The pubis orientation is ventral. The tarsus and calcaneal tuber are relatively smaller. The elements likely produce a simple hinge ankle joint as the base of all five metatarsals are aligned and metatarsal 5 is no longer hooked. Distal phalanges for digits 3 and 4 are unknown, but if they follow digit 2 they are shorter than the proximal phalanges. Digit 5 likely has no ungual due to its spherical tip. In Gracilisuchus and most crocs, digit 5 is absent.

Size enlargement produces Trialestes.
So much of Trialestes is known, but not illustrated. What bits and pieces of the foot that are illustrated confirms long slender compact metatarsals and short distal phalanges.

Further size enlargement produces Herrerasaurus.
More completely known is Herrerasaurus, a basal dinosaur in which metatarsals 1 and 5 are more gracile and shorter, yet the foot is overall broader. Metatarsal 4 is once again shorter than 3. The calcaneum is greatly reduced, essentially a vestige, and without a tuber. This is a simple hinge ankle joint. The foot of Eoraptor is essentially the same, but with a more compact and waisted metatarsus. Metatarsal 5 is a vestige.

As reported earlier,
analyses that nest Lagerpeton and pterosaurs with dinosaurs (like Nesbitt 2011 and Brusatte et al. 2010) are in great need of a larger taxon list that nest these unrelated taxa elsewhere.

Another purported dino sister candidate,
the bipedal basal croc, Scleromochlus, is most closely related to Gracilisuchus, among the above listed taxa. So Scleromochlus is close to, but slightly off the main line leading to dinos.