From the abstract:
Bever and Lyson 2013 wrote: “The reemergence of the Middle Permian amniote Eunotosaurus africanus as a potential early stem turtle is based on a number of striking postcranial synapomorphies, many of which are related directly to the evolutionary origin of the iconic turtle shell. Our data reveal a cranial morphology characterized by a large number of plesiomorphic features that suggest Eunotosaurus lies near the base of Panreptilia and outside the early radiation of pandiapsid forms. A good example is the large supratemporal bone that sweeps forward to broadly contact the postorbital – a character essentially unknown in Pandiapsida. The cranial characters of Eunotosaurus that are derived within Panreptilia are variously shared with an interesting taxonomic mix of turtles, parareptiles, and relatively derived diapsids (crownward stem diapsids and crown diapsids). One character that exemplifies this distribution is the slender, vertically oriented quadratojugal. This is a feature present in the early stem turtle Proganochelys quenstedti, a handful of parareptile forms, and as a derived character within Panarchosauria. Almost none of these derived features are shared with those taxa more nearly contemporaneous with Eunotosaurus and that constitute the early portions of the diapsid stem. Eunotosaurus also shares a number of characters with Proganochelys that are not established as present in other parareptiles. Examples include ossification of the anterolateral wall of the braincase and presence of a tall quadrate process of the pterygoid. We articulate and compare the models of cranial evolution as dictated by the currently competing hypotheses for the origin of turtles. The cranial evidence supporting a close relationship between Eunotosaurus and turtles amplifies the apparent conflict between the seemingly plesiomorphic morphology of the turtle stem and the seemingly derived molecular signature of the turtle crown.”

Earlier we tested Eunotosaurus with 350 reptiles and recovered it as a sister to Acleistorhinus, not turtles. Earlier we tested turtles with 350 reptiles and recovered the stem turtle, Proganochelys with Stephanospondylus far from Eunotosaurus. Even Odontochelys, previously considered a turtle sister, instead nested with the RC 70 specimen of Milleretta.

So that means we have three different convergent origins for turtle-like morphologies. Only one, Stephanospondylus, is the real deal. My guess is Bever and Lyson have not tested it in their “currently competing hypotheses.” They are also stuck with old pseudo clades, like Parareptilia, that lose their utility when the gamut of included taxa is increased here. 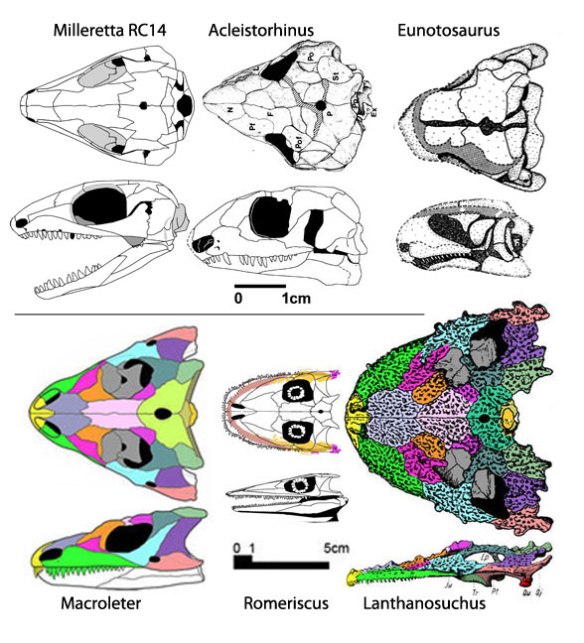