Pterosaur worker, Brian Andres, has produced a larger pterosaur tree than prior efforts by combining those prior efforts (Fig. 1). This was part of his 2010 PhD dissertation. The Wiki version (easier to read) can be seen here. I understand this tree will appear in a forthcoming (2014) volume entitled, “The Pterosauria.” Hope it avoids all past pitfalls, but judging by this tree (Fig. 1) and the description of the volume (“important new finds such as Darwinopterus“) we are due for another few years in the “dark ages.”

Sorry about that, kids. l’m really trying to fix things here by pointing out obvious errors.

Figure 1. Click to enlarge. Pterosaur family tree produced by Andres 2010 and in press. Color added to show clades according to the large pterosaur tree (that included several specimens of certain genera and included tiny pterosaurs, lacking here). The indigo bar by Eosipterus indicates one specimen is indeed a ctenochasmatid, but the other is a germanodactylid, as we covered earlier. So, specimens are needed here, not just genera.

Strange bedfellows
The Andres’ tree nested several taxa that also nest together in the large pterosaur tree. However, the Andres tree also produces several nesting partners that don’t look alike. They don’t share many traits. For instance, Andres tree nests the basal anurognathid Dendrorhynchoides with the germanodactylids (Fig. 2) at the base of the “pterodactyloidea.” Few pterosaurs are so different from one another. It seems improbable that one would evolve from the other. In the large pterosaur tree this transition actually was several convergent transitions — and all sister taxa document a gradual accumulation of derived traits — not the skull-jarring leap shown here (Fig. 2).

Figure 2. According to Andres these two pterosaurs are sisters. This, obviously, is erroneous.

Andres tree also nests the dorygnathid, Parapsicephalus (= Dorygnathus) purdoni with Dimorphodon (Fig. 3). Again, these two share very few traits. Click on the links above to see and read about pterosaurs that are more similar to these two, and you’ll see what I mean. 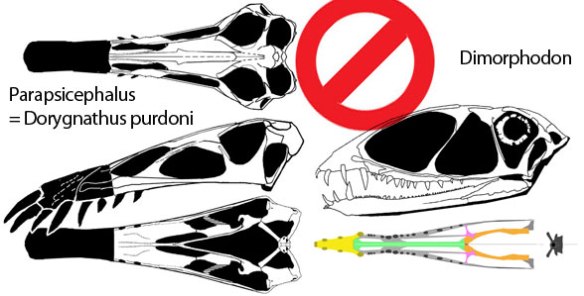 Figure 3. According to Andres, these two pterosaurs, Dorygnathus and Dimorphoson, are close sister taxa. According to the large pterosaur tree, they nest far apart.

There are several other misfits in the Andres tree, as shown by the various color codes (Fig. 1) that represent clades in the large pterosaur tree. For instance, Andres tree doesn’t recognize that azhdarchids and chaoyangopterids evolved from protoazhdarchids, like Beipiaopterus and Huanhepterus.

Some highlights
Andres tree does not put darwinopterids at the base of the “pterodactyloidea” but between Sordes and Changchengopterus and close to Scaphognathus. This is very close to results of the large pterosaur tree (Fig. 4).

Figure 4. The evolutionary lines that gave rise to Germanodactylus and Darwinopterus according to the large online pterosaur tree by yours truly. Small changes, gradual accumulations of derived traits are shown here. No strange bedfellows.

Andres nests the Triassic Raeticodactylus and Preondactylus at the base of the Pterosauria. While MPUM6009 is ancestral to both, these nestings are not bad (Fig. 5).

Figure 5. The origin of the Pterosauria from basal Fenestrasauria. This image is not current, but will update when enlarged. Note: Euparkeria is not involved here.

Figure 6. Click to enlarge. Left – evolutionary lineage according to Andres in which toothless pteranodontids give rise to toothy ornithocheirids. Right –  corrected lineages for each clade.

At the base of the pterosaurs Andres uses the derived erythrosuchid, Euparkeria, which shares no traits with pterosaurs. He would have been better off using a tritosaur or fenestrasaur, but chose to ignore the literature on pterosaur origins (Peters 2000, 2002, 2007).

Andres nests anurognathids with darwinopterids in a false clade, “monofenestrata” in which the naris and antorbital fenestra are supposed to be confluent, evidently based on the bogus reconstruction of Anurognathus by Bennett 2007, which we dismantled earlier here and here.

Some thoughts
Since so many pterosaurs are preserved in a crushed fashion it is imperative that they be reconstructed in order to ascertain the identification of bony elements. Few other workers attempt this and Andres is not known for doing so.