A few years ago Sterling Nesbitt (2011) recovered a tree of the Archosauria (Fig. 1) using several dozen taxa and several hundred traits. This is laudable. Unfortunately, Nesbitt’s inclusion set did not follow a larger gamut analysis (like the large reptile tree) to determine which taxa to include and which to exclude. So Nesbitt’s tree included several taxa that were not at all related to Archosauria and their ancestors, according to the larger gamut results. These outliers included Mesosuchus and pterosaurs (both nesting on the new Lepidosauromorpha branch, far from the archosaurs) and Vancleavea (a thalattosaur). 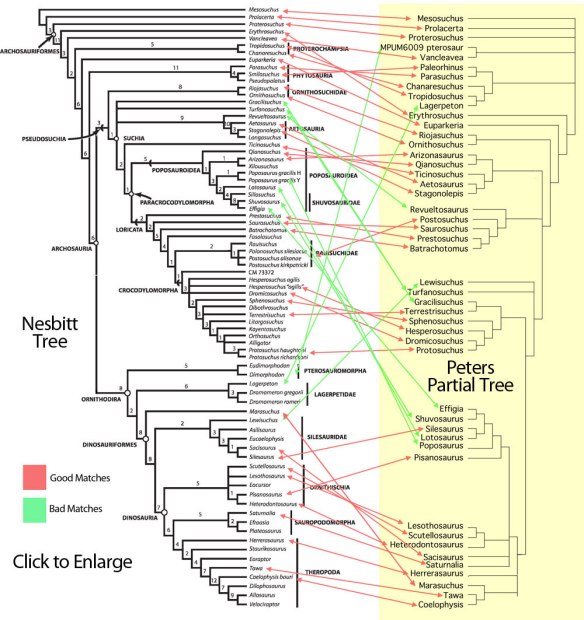 Figure 1. Click to enlarge. On the left is the Nesbitt (2011) tree. On the right is a subset of taxa from the large reptile tree. Pink double arrows, and there are lots of them, are pretty good matches. Green double arrows are mismatches. The lack of resolution in the Peters Partial Tree reflects the lack of real relationships among those many “by default” nested sisters. Eoraptor was inadvertently  pruned from the Peters tree, but nested with Saturnalia.

In an attempt at testing Nesbitt’s tree, I included as many of the same taxa, massively pruning the large reptile tree to do so. There are also several taxa in the Nesbitt tree that are not found in the large reptile tree, chiefly from the higher crocs, the higher dinos, the partial rauisuchians and a few odds and ends known from very incomplete material. The results (Fig. 1) largely echoed the Nesbitt tree, but several mismatches also arose.

Mismatch: Pterosaurs
Among the tree mismatches are pterosaurs, which nest close to dinosaurs in the Nesbitt tree but nest with Vancleavea in the large reptile tree after pruning the real sisters of pterosaurs among the lepidosaur / tritosaur / fenestrasaurs.

Turfanosuchus and Gracilisuchus
These two nest close to the Ornithosuchia (basal Pseudosuchia) in the Nesbitt tree, but at the base of the Archosauria/Crocodylomorpha in the Peters tree. Not sure why these two nest so far from the basal crocs in the Nesbitt tree, but the lack of the basal archosaurs and Gracilisuchus sister taxa, Scleromochlus,  Saltopus, Pseudhesperosuchus and Decuriasuchus may have something to do with it.

Poposaurs
Nesbitt nests poposaurs (those “dinosaur-like pseudosuchians”) with rauisuchians. Peters nests them with dinosaurs (despite the calcaneum tuber) and includes in their number Sacisaurus and Silesaurus. Nesbitt, like Mortimer, nests beaked Sacisaurus and beaked ornithischian dinosaurs like Lesothosaurus, and other plant eaters, like Saturnalia, basal to non-beaked theropod dinosaurs, which appears to be due to the creation of an upside-down topology (correct but inverted) and far from Marasuchus, another theropod, according to the large reptile tree.

The differences between the two trees arise from the choice of taxa and characters.
The Peters tree uses many more taxa. This allows pterosaurs, Mesosuchus and Vancleavea to nest more parsimoniously elsewhere and to separate parasuchians, chanaresuchians (including Lagerpeton) to separate from the rest. Nesbitt did not employ any younginids or choristoderes, which nest at the base of the Archosauriformes.

The Nesbitt tree uses more and different characters, many too small or hidden to be observed in a typical reconstruction (though they may and are still important!), which is the prime source for the Peters characters.

In the Peters tree all taxa share a large number of traits. In other words, very few traits separate sisters. They could have evolved from one another.

The Nesbitt tree ignores the strange bedfellows it produces in which sister taxa share very few traits, but nest by default, as some do in the pruned Peters tree.

The Peters tree finds that enough taxa are known to produce a gradual accumulation of traits in derived taxa and a gradual spectrum of morphologies.

The Nesbit tree assumes (or hopes) that there are large numbers of taxa that will someday fill out and blend in the disparate morphologies among putative sisters. In many cases, these taxa are indeed known, just not used by Nesbitt.

There are also some irreversible reversals in the Nesbitt tree that are absent in the Peters tree when you get down to details. More plesiomorphic taxa can be found in basal positions in the complete Peters tree (the large reptile tree), like the many younginids missing from the base of the Nesbitt tree.