A short series on basal archosaur hands follows.
They are rarely preserved, so any clues are valuable.

Scleromochlus (Fig. 1) nests as a basal bipedal crocodylomorph in the large reptile tree, close to Saltopus, Gracilisuchus and Terrestrisuchus. However, Sereno (1991), Bennett (1996), Benton (1999), Senter (2003) and Hone and Benton (2008) among others found Scleromochlus nested with pterosaurs, but this was in the absence of the aforementioned genera.

The hand of Scleromochlus,
the hand that could have turned into a wing if Scleromochlus was indeed related to pterosaurs (according to the aforementioned authors), is preserved, but not well preserved (Fig. 1). Even so, very little reconstruction is necessary. It is what it is, a vestige. 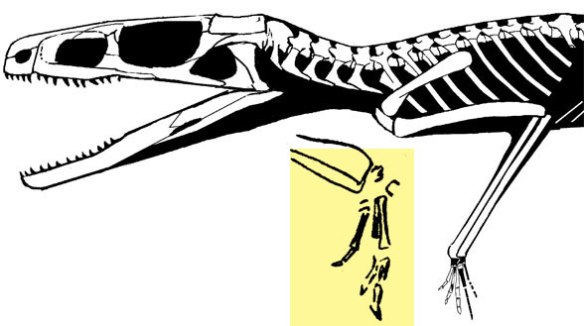 Figure 1. Scleromochlus forequarters. The yellow area shows the hand enlarged in situ. The size of the Scleromochlus hand makes it the last possible sister to pterosaurs, famous for their very large hands.

First of all, the hand preserves only three digits and a few carpals. Those are digits 1-3. Digits 4 and 5 were either absent or not preserved. Considering the very tiny size of the hand and phylogenetic bracketing, either is possible.

In pterosaur ancestors digit 5 also became a vestige, so that’s not a factor here.

In pterosaur ancestors digit 4 and metacarpal 4 were larger than the others. Interesting then that the biggest bones of the hand did not get preserved in Scleromochlus. That large 3-sided block could be the base of metacarpal 4, but in phylogenetic bracketing that would be unlikely as no sisters follow that pattern. Rather that large 3-sided block is likely a radiale or ulnare, bones which become elongated in bipedal basal crocs, like Terrestrisuchus, those carpals remain elongated even in modern crocs.

For some reason, likely a bad paradigm, pterosaur workers continue to hold on to the idea that Scleromochlus could be a pterosaur ancestor candidate, as Witton (2013) wrote, despite the publication of Peters 2000a, b, 2002, 2007 and 2013, papers that demonstrated not one, but four genus-based fenestrasaur taxa that made better ancestors for pterosaurs than did any archosaur, including Scleromochlus.

As anthropologiest Elaine Morgan observed here, quoting Thomas S. Kuhn (1962, the inventor of the term “paradigm shift”), “What scientists do when a paradigm fails is… (guess what?) they carry on as if nothing had ever happened.” Morgan also reports, “You can’t solve a scientific problem by holding a head count. More of us say yes than say no.”

This explains… so much
This explains why Unwin (2005) and Hone and Benton (2008) omitted any reference to Peters (2000a, b, 2002) and why Hone and Benton (2007) deleted Sharovipteryx and Longisquama and used only a quarter of the traits of Cosesaurus to discard the fenestrasaur hypothesis of pterosaur ancestry under the pretext of testing it. This also explains Darren Naish’s rant from a year ago at Tetrapod Zoology that focused on everything but the website he was ranting against.

And that’s how we go from tiny impressions in Scottish sandstone to basic human psychology in one blog post.

1 thought on “Reconstructing the hand of Scleromochlus”