Dendrorhynchoides curvidentatus (Ji and Ji 1998 – originally Dendrorhynchus preoccupied) Tithonian, Late Jurassic or Barremian-age Lower Cretaceous, ~150 -130 mya (later considered Middle Jurassic), ~13 cm in length [GMV 2128] was originally considered a rhamphorhynchid due to its long, robust tail. Later that long tail was considered a forgery added from another specimen (making this fossil a chimaera) to increase its value on the fossil market. Ironically, as we learned earlier, the real tail has been overlooked, bent under the left uropatagium (Fig. 1). The real tail is slightly longer, just not so robust. 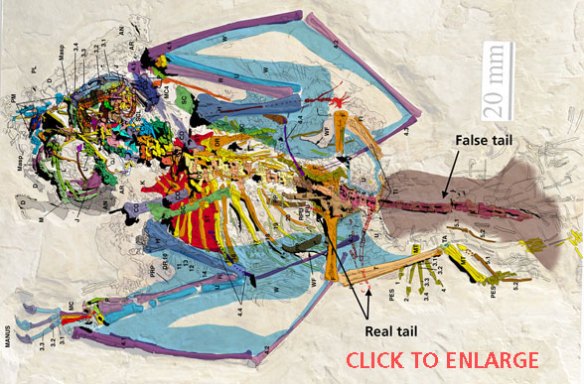 Figure 1. Dendrorhynchoides after DGS (digital graphic segregation). Click to enlarge. Here the doctored tail is outlined in brown. The real tail is identified with an arrow. Contra published reports and Wikipedia, the sternal complex and m4.4 are both present and all the parts of the skull can be identified. See figure 2 for a reconstruction.

Speaking of the tail…
A second specimen attributed to Dendrorhynchoides was named, and it nests as a close relative, but nests just a little closer to the flathead anurognathid. The second specimen, undoubtedly a distinct genus that needs a new name, has a long tail, too. The long tail came as a surprise to Hone and Lü (2010), but confirmed my studies in which longer tails are routinely found in anurognathids.

These are the only skeletal reconstructions of either Dendrorhynchoides. Obviously they are distinct genera and the second needs a new name. Shunning DGS, professional paleontologists consider the task too daunting or time consuming to make anurognathid reconstructions. When one attempt was made at reconstructing an anurognathid skulls, as in the curious case of the flathead anurognathid (Bennett 2007) major mistakes were made.