Updated July 07, 2015 with a new reconstruction of Aurornis.

“A birdlike fossil that dates to roughly 155 million years ago is ruffling the feathers of some paleontologists. At issue is whether the fossil is a dinosaur, an early bird or something in between,” Rachel Ehrenberg of Science News wrote. “This new animal is the most primitive bird in the world,” says paleontologist Pascal Godefroit of the Royal Belgian Institute of Natural Sciences.

And further down, Ehrenberg writes, “Not everyone agrees with Godefroit’s interpretation. ‘This is very birdlike, but it is not yet a bird,’ says paleontologist Luis Chiappe of the Natural History Museum of Los Angeles County.”

The name of the new dinosaur with feathers is Aurornis xui. Twice as tall as Archaeopteryx (Fig. 1) and three times as long, Aurornis preceded Archaeopteryx by 10 million years and lived in China.  Lacking large feathers, Aurornis did not fly, but would have been a speedy runner. Aurornis phylogenetically precedes Archaeopteryx and all other birds. So is it a bird? Or pre-bird?

Who is right?
Here is the traced specimen. The fossil appears here online. The coracoids are hard to see as they overlap one another in situ, but they appear to be strut-like. If so, Aurornis flapped, not that that matters…but if Archaeopteryx was a poor flyer, than Aurornis didn’t have a chance. 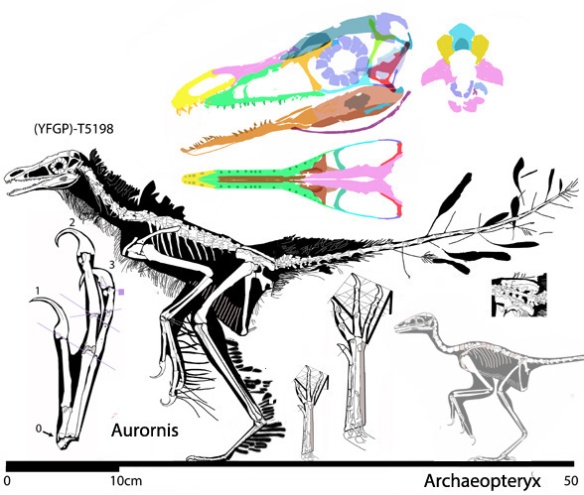 Everyone wants to find the first, the biggest, the best, etc.
It comes down to how paleontologists and ornithologists define what a bird is. According to Luis Chiappe of the Natural History Museum of Los Angeles County quoted in LiveScience, “Traditionally, we have defined birds as things like Archaeopteryx and closer to things like modern birds. If you stick to the definition, this thing is not the earliest known bird.” Even so, it is a very interesting animal that “still helps us understand better the origin of birds,” Chiappe said.

Indeed
Aurornis is a wonderful new taxon that gives greater insight into the origin of birds, but it is not one by definition.