With the Rio Pterosaur Symposium 2013 coming to end, I thought it appropriate to bring out one of the most important taxa in the study of pterosaurs. Ironically no one else, including its discoverer, seems to think so, except yours truly. At the two previous symposia, Dr. Peter Wellnhofer lamented, “We still don’t know where pterosaurs come from. We have no Archaeopteryx for pterosaurs.” I imagine, if he is attending the Rio symposium, he and the other traditional workers continue this lament — all of which is their own fault because they have their scientific blinders on.

So did Dr. Paul Ellenberger (1974, 1978, 1993), the first scientist to describe the small, complete, beautifully preserved impressions of a little Middle Triassic lepidosaur, Cosesaurus aviceps. Ellenberger looked at Cosesaurus more thoroughly over a longer period of time than any other worker and all he saw was a bird ancestor. Earlier here and here we looked at what details Dr. Paul Ellenberger saw in Cosesaurus, focusing on the impressions of bones. Here we’ll focus on the impressions of soft tissues. I can confirm, through personal observation of the original fossil, that these impressions are indeed present. Anyone else with a ticket to Barcelona can test these observations themselves.

Figure 1. Cranial frill of Cosesaurus compared to that of a Hoatzin. Image by Paul Ellenberger (1993).

The cranial frill (Fig. 1), like that of other lepidosaurs from Basilisk to Sphenodon, may have been retained and ossified by derived pterosaurs. Such a decoration attests to a secondary sexual trait and a possible cooling surface for this facultatively bipedal flapping sprinter. There also appears to be a thin vertical plate over the nasals, likely produced by the premaxilla ascending process. Such decorations come and go in pterosaurs and their kin.

Figure 2. Dorsal frill of Cosesaurus. Image by Paul Ellenberger (1993). That “sternal keel” is the stem-like quadrant-shaped coracoid identical to that in early pterosaurs.

The dorsal frill of Cosesaurus (Fig. 2) was inherited from Sphenodon and Huehuecuetzpalli and found the acme of its expression in Longisquama. It looks short, but continue those lines to the vertebrae and they become substantial in length.

The caudal fibers of Cosesaurus (Fig. 3) were further decorations that Ellenberger considered pre-feather shafts, but are actually just fibers, some of which near the tail tip would ultimately coalesce to become a pterosaur tail vane.

Actinofibrils also emanated from the posterior of each forelimb (Fig. 4). These would ultimately become  pterosaur wings and falsify the hypothesis that pterosaurs started as gliders with proximal extradermal membranes (as in gliders). In Cosesaurus and its descendants flapping the arms while running with these fibers ultimately added thrust sufficient for flight.

Fibers and membranes emanating from the hind limbs attest to the origin of paired uropatagia in Sharovipteryx and pterosaurs. Note the presence of fibers around the knee. These attest to an insulation layer, either to trap heat or keep biting insects away from the skin.

There are very few traits that pterosaurs have that are not also found in Cosesaurus, other than the elongated manual digit 4 that framed the enlarged wing. Even so, even this trait has its genesis in Cosesaurus. Paul Ellenberger (1993) certainly made mistakes in biasing his interpretation toward birds, but he is also to be commended for his careful observations of various soft tissue impressions that are key to our understanding of these traits in pterosaurs. 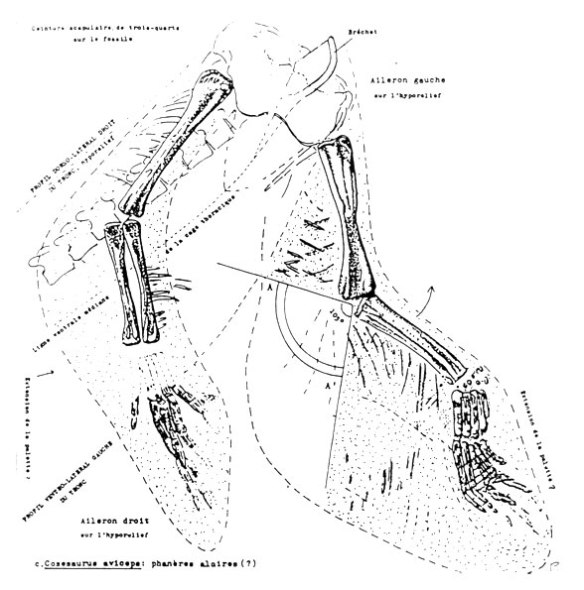 Figure 4. Cosesaurus fibers from posterior forelimbs. Image by Paul Ellenberger (1993). In his quest to interpret Cosesaurus as more birdy, Ellenberger flipped the hand over so that digit 4 became his digit 2. His sternal keel is actually the quadrant-shaped coracoid stem. His broad coracoids is actually one large sternum becoming integrated into a new structure, the sternal complex.

Cosesaurus truly is the Archaeopteryx of pterosaurs, bridging the gap between lizardy forms like Huehuecuetzpalli and the flying pterosaurs. I’m not the only ones seeing these structures. Dr. Paul Ellenberger saw them a decade earlier. 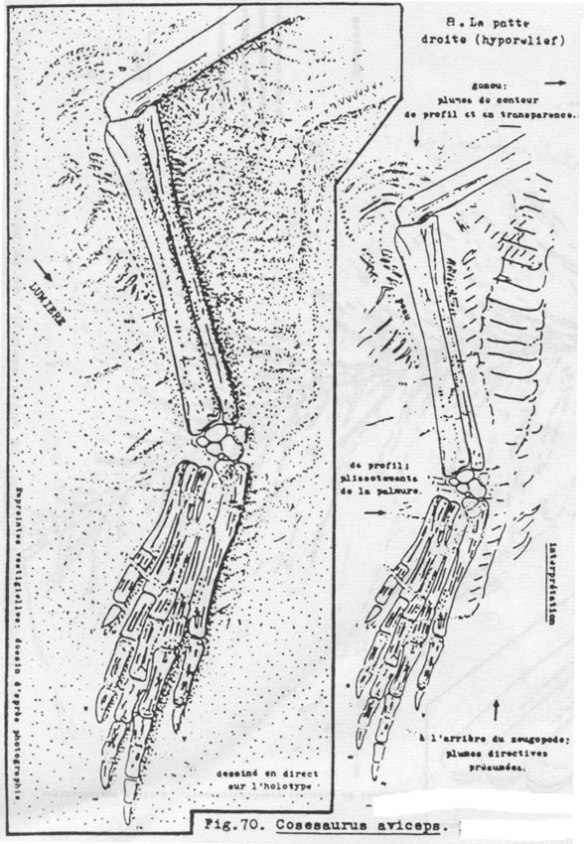 A minor challenge
It would be nice if someone from the next generation of pterosaur workers would get on a plane to Barcelona and take a good look at this “Archaeopteryx of pterosaurs.” Since Science is built on testing observations, it’s just a shame that no one else in the last twenty years, other than yours truly, has confirmed Ellenberger’s key and important observations.

Of course, this would upset all sorts of paradigms and traditions if done.

Figure 6. Current interpretation of Cosesaurus with soft tissues in black. Rostral crest omitted here.  This is no ordinary macrocnemid. By any measure, this is the “Archaeopteryx” of pterosaurs and needs to be recognized as such. The pes matches narrow gauge, digitigrade and occasionally bipedal Rotodactylus tracks.