Turtles have an unusual morphology.
So unusual are turtles that most paletonotolgists are still wondering from whence they came. Various professors use fossils to support their hypotheses. Othere use DNA. All these attempts result in different answers. Even the genetic story has flip-flopped from archosaurs to lepidosaurs and back again.

The problem is turtles (Figs. 1,2) are different from all living animals and distinct from most prehistoric ones. Their roots are very deep. Earlier we looked at taxa that looked like turtles, but were not turtles. Here we’ll expand that list.

What are turtles?
Phylogenetically what we’re looking for is the reptile most like a turtle that is not yet a turtle. We know of several turtle-like reptiles (see below), but none share a turtle’s basic anatomy. They all developed their protective shells via convergence.

Genes
A recent (May 15, 2012) online story here reports from Crawford et al. (2012), “Scientists lift lid on turtle evolution. Anatomy and fossil studies of turtles and their reptilian relatives generally place the shelled creatures in the family of lepidosaurs — snakes, lizards and tuataras (rare lizard-like animals). Genetic studies, however, say they have more in common with crocodiles and birds.”

Of course,
if turtled did descend from archosaurs and their kin, then we have to look for the closest relatives of turtles in the new Archosauromorpha. Trouble is, given the widest gamut of possibilities yet offered, turtles nest in the other lineage, of lizards and their kin, not with archosaurs. Other respected genetic studies, like Lyson et al. (2012), report turtles are genetically closer to lizards.

So how do we solve this problem?
We can’t. All three sides have their proof.

Of course, someday you’ll have to find a non-turtle that looks like a turtle, and that’s phylogeny and morphology. So, here we’re going to look at seven distinct types of reptiles (including mammals) that had a turtle-like morphology. We’ll start with turtles themselves.

Figure 1. Proganochelys from the Late Triassic. Formerly the most primitive turtle.

Figure 2. Odontochelys, also from the Late Triassic, the new most primitive turtle. It has teeth. The carapace is missing. Lost or not yet developed has not been determined yet.

Figure 3. Stephanospondylus from Romer (1925). According to the results of the large reptile tree, this is the most turtle-like non-turtle yet discovered. And yet, among all these taxa, it’s the only one without a shell or scutes (that I know of). Chronologically Stephanospondylus precedes the Odontochelys by 70 million years, plenty of time to iron out the differences and plenty of time to find a transitional taxon or ten, seven million years apart from each other someday. No carapace or plastron was preserved with Stephanospondylus.

1. Turtles themselves
Derived from Stephanospondylus, turtles like Odontochelys and Proganochelys have a plastron, but only Proganochelys has a carapace. Thus, Odontochelys was analogous to a “soft-shelled” turtle, but not directly related. Turtles have fewer than ten dorsal ribs and have no temporal fenestrae. Stephanospondylus is a little-studied diadectomorph close to pareiasaurs that happens to share more traits with turtles than any other studied taxon. Unfortunately, it is incompletely known and crushed. We studied Stephanospondylus earlier here. I hope other paleontologists will begin to consider this long neglected taxon in their turtle studies, at least to test the large reptile tree results. In order to do so, they will also have to recognize the reptile traits of diadectomorphs. Unfortunately at present diadectomorphs are widely considered to be non-amniotes close to basal amniotes.

3. Henodus
Derived from a sister to Placodus, Henodus is another placodont with an independently evolved wrap-around carapace and tiny legs projecting out of anterior and posterior openings. Tiny upper temporal fenestra and a broad rostrum differentiated this taxon from turtles and cyamodontids. 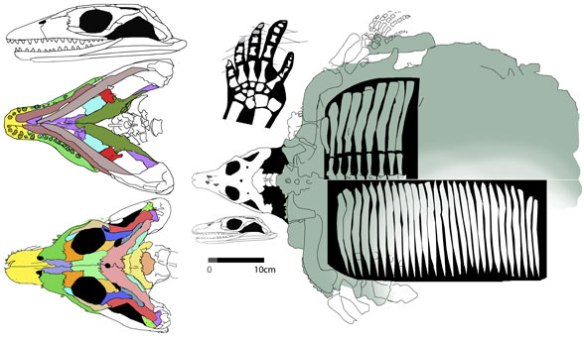 Figure 5. Sinosaurosphargis. Click for more information. Not sure about the anterior extent of the maxilla, here shown two ways. Ribs and gastralia like these are not known in Omphalosaurus, which has more plesiomorphic and typical looking ribs and gastralia.

4. Sinosaurosphargis
Derived from Claudiosaurus, Sinosaurosphargis and Largocephalosaurus have a carapace covering dozens of wide flat ribs and gastralia. The nostrils are located midway between the long snout tip and orbit. 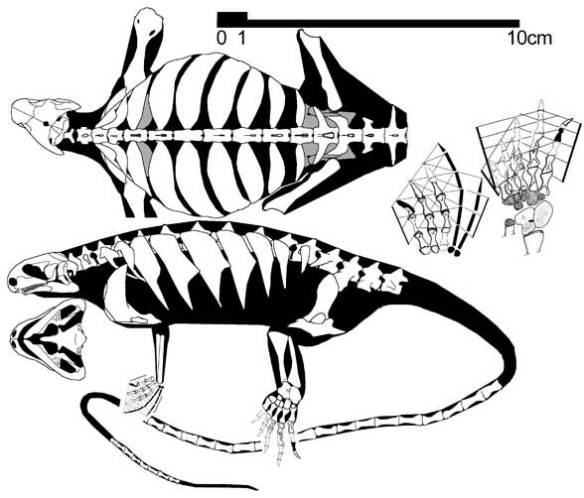 5. Eunotosaurus
Derived from Acleistorhinus, Eunotosaurus has nine expanded ribs, like turtles, but no true carapace or plastron. Lateral temporal fenestra are present. The tail is exceptionally long.

Figure 7. Ankylosaurus, dorsal view. This early image was made prior to the discovery of tail clubs in ankylosaurs, but reflects the distribution of osteoderms over the bak.

6. Ankylosaurs
Derived from basal ornithischian dinosaurs like Scelidosaurus, ankylosaurs like Ankylosaurus, had a carapace made of osteoderms. 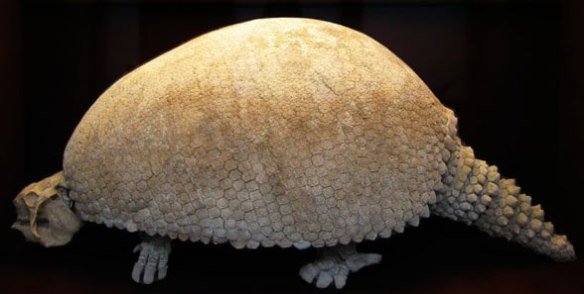 8. Glyptodonts and Armadillos
Derived from armadillo-like ancestors, glyptodonts like Glyptodon, had a carapace made of hexagonal scutes, otherwise known as bony skin scales called osteoderms.

I’m not including Jaxtasuchus, an armored protorosaur, which we looked at earlier. It could be number nine, but it’s getting longer and thus less turtle-like.

So, turtle-like anatomies are fairly common in the prehistoric past. Now, not so much, but turtles themselves display a wide variety of types and sizes and niches. Most paleontologists understand that these taxa are all distinct from turtles. However, when some of these taxa are included in phylogenetic analyses without also including Stephanospondylus, pareiasaurs and diadectids, then turtles tend to be attracted to these shelled wonders and thus skew the results toward placodonts or eunotosaurs (Lyson et al. 2010).

Just want to give the rightful ancestors their due. The strength of the large reptile lies in its ability to differentiate the true ancestors of turtles from the convergent pretenders.