Dr. Sterling Nesbitt (2011) recently published his chronological family tree of archosaurs and their ancestors (Fig. 1). It’s too small to read, so please click on it to enlarge it. 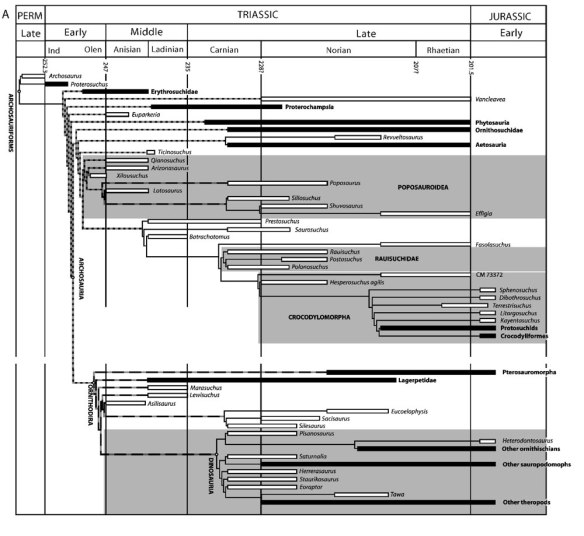 Figure 1. Click to enlarge. The family tree of Archosaurs and their ancestors by Sterling Nesbitt, who includes pterosaurs, phytosaurs, and proterochampsids (including lagerpetids) that do not belong here according to the large reptile tree of Peters.

Taking the same chronological data, I rearranged and edited the taxa according to the results of the large reptile tree (Fig. 2). 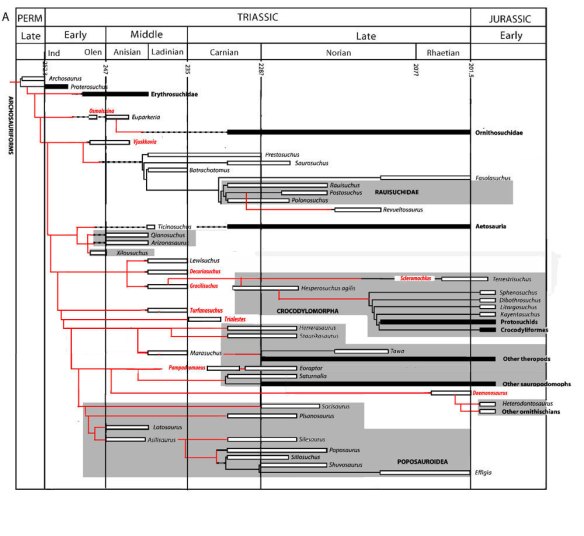 Figure 2. Click to enlarge. The family tree of Archosaurs and their ancestors according to the large reptile tree by Peters. Note the absence here of phytosauria, proterochampsia (including lagerpetidae) and pterosauromorpha all of which nest far afield in the large reptile tree. A few taxa are added here. As in Nesbitt’s tree, the major radiation occurred during the early Triassic and rather quickly. Here most dinosaur groups had a long ghost lineage into the Early Triassic, except, possibly, the Ornithischia evolving from Daemonosaurus

The evolution of dinosaurs and their ancestors is an intriguing question made more puzzling by the early appearance of Lotosaurus and Asilisaurus, two highly derived forms appearing in the early Middle Triassic, much sooner than the rest of the known fossils. 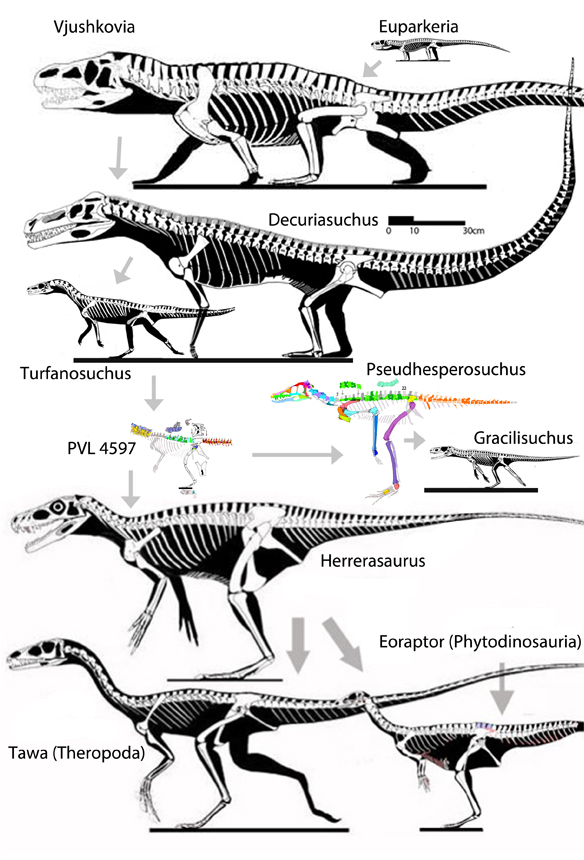 The question of poposaur nesting is the big difference here. Nesbitt finds that Ticinosuchus is basal to poposaurids. The large reptile tree found that Ticinosuchus was basal to aetosaurs and Sacisaurus was basal to poposaurids, despite its late appearance in the fossil record. The addition of Daemonosaurus (Fig. 2) provides a short path toward the Ornithischia. Nesbitt (Fig. 1) has a much longer path to the Ornithischia, close to Pisanosaurus, but running to the Early Triassic.

Poposaurids have been described as extremely convergent with dinosaurs, but their croc-like ankle gives them away. The large reptile tree found the development of a croc-like ankle was convergent in crocs and poposaurids, both developing from ankles without a calcaneal tuber or much of one.

The clade of Eoraptor, Panphagia and Pampadromaeus turns out to be the clade from which all phytodinosaurs (sauropodomorphs, ornithischians and poposaurids) evolved.