Asterisks* note possible changes in interpretation made during this addendum.

It’s time to add another Gracilisuchus to the data matrix

This one (MCZ4116) has been known since Brinkman (1981) and is deemed worthy of inclusion due to its phylogenetic placement (between Gracilisuchus and Scleromochlus) and distinct morphology. You might remember earlier we looked at the hind limb specimen (PVL 4597) described by Lecuona and Desojo 2011 and found it nested a few nodes away from the holotype and therefore could not be congeneric. 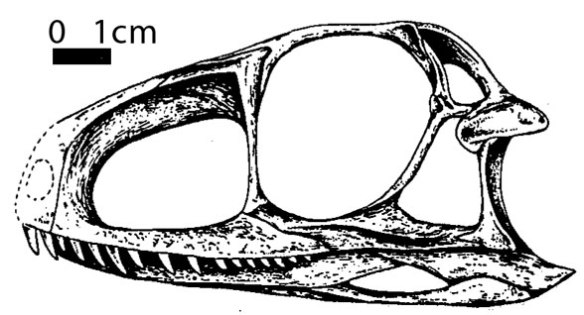 Figure 1. The second Gracilisuchus described (Brinkman 1981) with a more juvenile looking skull despite sharing a similar size with the holotype (fig. 2). It nests between Gracilisuchus and Scleromochlus. It is not congeneric, but certainly a sister to Gracilisuchus.

Basal crocodylomorphs and basal archosaurs
This taxon is important in that it demonstrates* the vertical quadrate atypical for crocs and more typical for dinos. It nests near the base of the Archosauria. It would have had a robust neck pretty much like that of Gracilisuchus (fig. 2) and tiny Scleromochlus, it’s other sister.

What do the larger orbit and taller skull tell us?
This specimen had even larger eyes*. The rounder rostral profile* reminds one of the basal dinosaur/phytosaur/maybe ornithischian, Daemonosaurus, which was heading toward herbivory. Not sure if the same can be said here in the case of the Brinkman specimen or not.

The flatter skull is a trait shared by Gracilisuchus and Scleromochlus to the exclusion of this Brinkman (1981) specimen, which indicates it is an offshoot* without any other short-rostrum relatives currently known.

Addendum figure 2. Skull of Graciliisuchus according to Parrish (1993), very much in the shape that Romer (1972) illustrated.

Reader M. Mortimer suggested that, according to Brinkman 1981, the skull of Gracilisuchus was not like the one illustrated by Romer, but actually closer to MCZ 4118. To counter that, Parrish 1993 reported that Gracilisuchus was represented by at least six well-preserved specimens and also illustrated one very much in the shape that Romer (1972) proposed (Addendum figures 1 and 2).

Addendum figure: A rather complete Gracilisuchus skull, courtesy of M. Parrish. I have dodged the darkest areas in Photoshop to bring out detail.

Addendum figure 2. A taller snouted Gracilisuchus, not MC 4118 by its appearance. Photo by M. Parrish. Are the differences between these two skulls gender-based? Reconstruction based? Taphonomic? Or individual variation? 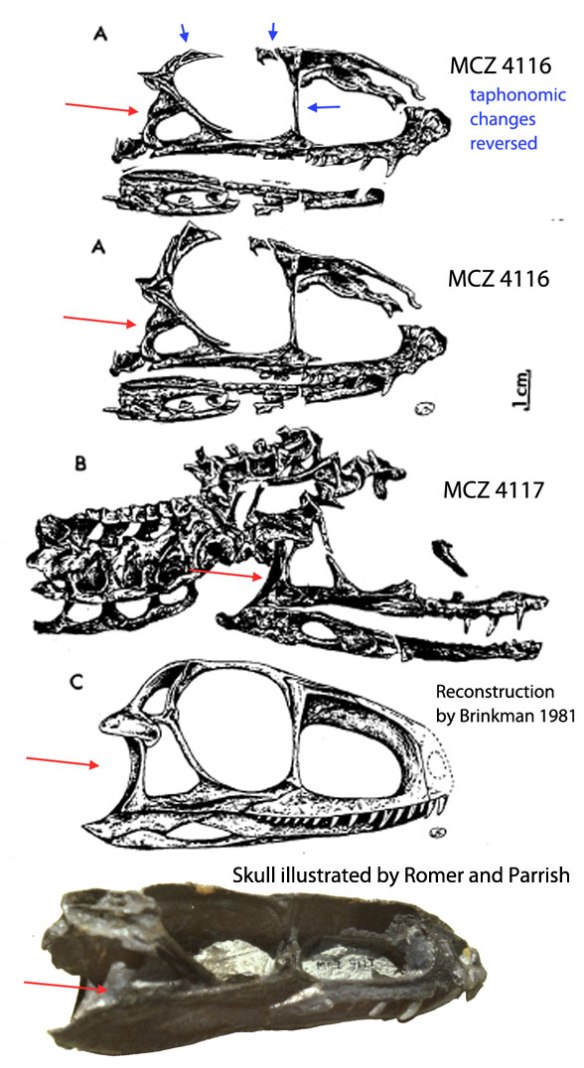 Addendum image. Two skulls illustrated by Brinkman 1981. Note both are partials. Below a photo of a complete skull. Above MCZ 4116 restored by reversing the taphonomic flattening/rotation to the parasagittal plane of the postorbital and preorbital areas. The lacrimal appears splint almost longwise. If so, sliding the pieces back together also reunites the front of the skull parts that were separated after death. All these changes reduce the apparent skull height. Also note the position of the quadrate, rotate to the vertical, posterior side exposed, on MCZ 4117.

* So, most if not all differences in these skulls may be due to the influence of taphonomy, rotating cranial elements to the parasagittal plane and splitting other bones. There may still be differences, perhaps due to individual variation, etc.

3 thoughts on “Another Gracilisuchus (from Brinkman 1981)”