Figure 1. The ear in three living archosauromorphs, crocs, mammals and birds. The ear flap seen in crocs and the platypus is by convergence, perhaps to keep the water out.

Living members of the new Archosauromorpha (Fig. 1, crocs, birds and mammals) all have well-developed ears, but only higher mammals have the erect external ears we typically think of.

At the base of the Archosauromorpha we don’t see evidence for ears. The stapes, the first and typically (except in mammals) the only ear bone, tends to be robust, helping to support the jaws. That evidence for an eardrum frame first appears in basal therapsids as a creation of an angular flange that thereafter thins to become a gracile encircling eardrum frame (Fig. 2). In higher mammals the 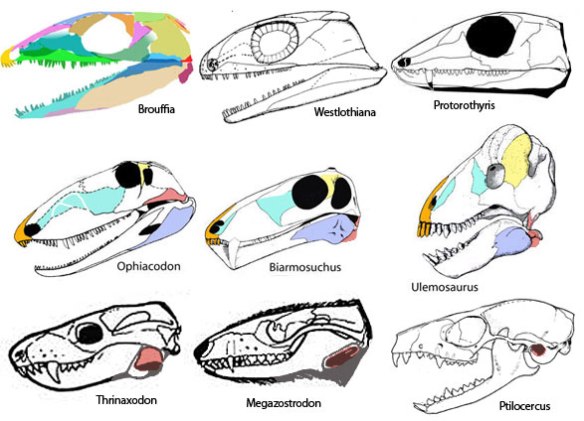 Figure 2. Reptile Ears, basal Archosauromorpha. If external ears were present, they did not leave any obvious frame at the back of the skull, as in lepidosauromorphs. Basal therapsids developed an eardrum frame derived from the angular bone. Some workers think the large stapes in basal reptiles did not permit sound reception. Others think the large stapes supported a very large eardrum not otherwise supported (not sure how that could be kept taut).

There is likewise not much of a clue in basal diapsids with regard to their hearing. We skip the enaliosaurs, which were underwater creatures and don’t see a lepidosauromorph-like eardrum frame on any taxa before protorosaurs like Czatkowiella (Fig. 3) and perhaps some younginids, but data is sparse on them at present. Prehistoric crocs and dinosaurs probably developed like living crocs and birds. 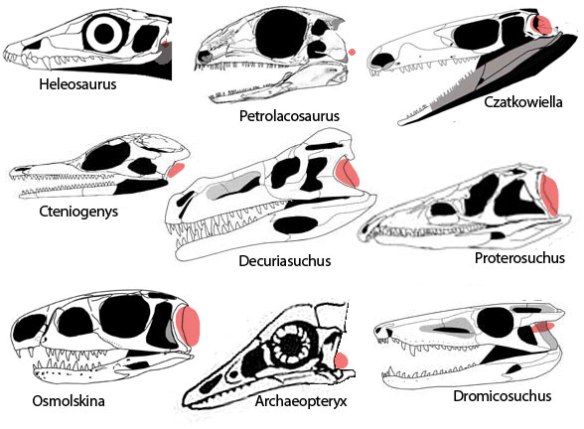 Figure 3. Reptile eardrums – diapsids, crocs and birds. No marine reptiles of the clade Enaliosauria are included because no clear evidence for ears appears in that underwater clade. Crocs have ears higher on the skull than birds. All other eardrum placements are guesses. Like lepidosauromorphs the squamosal appears to have framed the eardrum at the back of the skull as shown.

Figure 5. Bird middle ear cross section. The stapes is the only bone in the auditory link.

The more birdy or croc-like a taxon gets, the easier it seems to be able to imagine an eardrum framed at the back of the skull and deeper than at the surface.

Here, if anyone has additional data, I will gladly add it later.