Lü and Hone (2012) just published on a new Chinese anurognathid (Middle Jurassic, formerly GLGMV 0002, now JZMP-04-07-3) which they attributed to the genus Dendrorhynchoides curvidentatus, but gave it a new species, D. mutoudengensis.

Yesterday we used DGS to tease more data out of the fossil (especially the skull), create a reconstruction (Fig. 1) and nest the new specimen phylogenetically. It turns out the new specimen nests close to D. curvidentatus, but closer to the flat-head anurognathid, without sharing too many of the oddities found in the latter (see details below).

So the new specimen needs a new generic name. 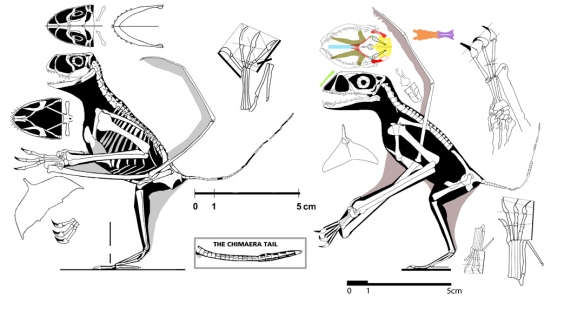 Figure 1. Click to enlarge. (Left) The holotype of Dendrorhynchoides compared to (right) the new ?Dendrorhynchoides, that actually nests with the flat-head pterosaur and the two nest alongside Dendrorhynchoides… so, not far off. The similarities are striking, but the differences suggest these two are not congeneric. The chimaera tail is the one added to the fossil by preparators. The actual tail was found later (see text) curled toward the torso.

The holotype of Dendrorhynchoides curvidentatus is an odd sort of anurognathid with a small head and a big belly supported by a very wide sternal complex. It seems like a good candidate to be a seed/plant-eater given the voluminous gut supported by the most robust ribs in the Pterosauria. Withe that wider than deep, big belly, Dendrorhychoides was, perhaps, the most comical-looking of the pterosaurs. The tail, which was the topic of much interest by Lü and Hone (2012), but never identified by them, can be seen in situ here. It was discussed earlier here.

The new ?Dendrorhynchoides of Lü and Hone (2012) is much more a generalized specimen with average features expected in a ‘generic’ anurognathid. In the new specimen the head is larger with a larger orbit; the palatines are longer; the pterygoids are shorter; the neck is shorter; the torso is less voluminous; the antebrachium is relatively longer; the fingers are more gracile; the sternal complex is smaller; the ilium is longer; the femur is relatively longer; the pes is wider (more robust) and pedal 5.1 does not extend beyond the metatarsus.

Both specimens have tails of subequal length and numbers of vertebrae.

As mentioned yesterday, reconstructions bring the pterosaurs back ‘to life’ and are the only means by which certain aspects can be understood. Phylogenetic analyses are paramount before assigning a new species to a genus that actually nests with another closely related genus. This is cause for others to rework the nomenclature at some future date.

My offer still stands
I continue to offer my services to any paleontologist having trouble deciphering a ‘road kill’ fossil. I also offer my reptile and pterosaur trees to help nest new specimens. Unfortunately, too often I’m put into the position of having to chastise paleontologists afterwards for poor workmanship or overlooked data, but that can be remedied.

Making mistakes is forgivable. Not even trying to glean data, when they admit in print that it is there, is not what we’re looking for in a professional presentation.