One core and basis of the Pterosaur Heresies blog is to demonstrate that, how and why pterosaurs have nothing in common with dinosaurs or their precursors, despite reams of traditional literature promoting that relationship. For example:

“Pterosaurs and dinosaurs have been grouped together for along time, and today, the prevalent view among vertebrate paleontologists is still that they do indeed form a natural group of animals.” — Nick Fraser (2006) in “Dawn of the Dinosaurs.”

If this false paradigm continues another two years that will complete a full three decades of belief in the official, “Ornithodira,” the clade THEY say includes both pterosaurs and dinosaurs. I say ‘belief’ because there’s absolutely no evidence for this relationship — as traditional paleontologists themselves have noted (see below).

“Pterosaurs appear suddenly in the fossil record and in full possession of all their highly derived characters…” — David Hone and Michael Benton (2007, 2008).

“As Figure 4.3 illustrates, paleontologists don’t really know where this group should sit within the diapsid family tree. The reason for this is simple — a complete lack of protopterosaurs that might link this group to other diapsids.” — David Unwin in The Pterosaurs from Deep Time.

Unfortunately, such statements give ammunition to Creationists, because it sounds like pterosaurs were “specially created” and nothing could be further from the truth. So this damages the good names of both Paleontology and Science and can only be repaired by professional paleontologists with PhDs. I’ve done and continue doing my part.

To put the final nail in the coffin
No paleontologist has been able to put forth even a short series of taxa that demonstrate a gradual accumulation of pterosaurian traits within the Archosauria or Archosauriformes.

We also talked about this and solved this problem in the first four PterosaurHeresies.com blogs here, here, here and here.

It’s actually THIS EASY to solve the problem:
If you include several hundred representatives from the gamut of prehistoric reptiles in phylogenetic analysis, at least by default and at best by shared homologies, you will recover some taxa that will nest closer to pterosaurs than to other reptiles. So it’s the shame of paleontology that no one else has attempted this time-consuming, but otherwise relatively easy task by expanding the taxon list to include lepidosauromorphs, lizards, tritosaurs and fenestrasaurs. Actually it can be done with as few as a dozen key taxa if you’re pressed for time, as already shown in an academic publication (Peters 2000). The taxa it promotes continue to be ignored by all other workers* in one of the more interesting feuds/wars in the history of paleontology. I don’t care if you ignore the paper. Don’t ignore the taxa.

*Except Senter 2003, who bungled his observations and provided cartoons for figures. To be fair, I also made freshman mistakes tracing the same difficult taxa, but corrected them here, here and here.

History of the Ornithodira
In the earliest days of phylogenetic analysis, Gauthier & Padian (1985) placed pterosaurs within the clade Ornithosuchidae (Huene 1914) along with Lagosuchus (= Marasuchus (Sereno & Arcucci 1994)), and the Dinosauria. 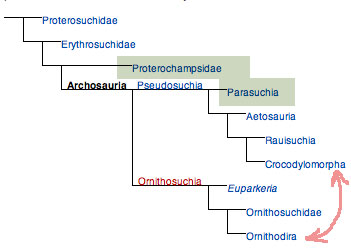 Figure 2. A tree recovered from Gauthier 1986 (form Wiki) Pararchosauriformes are in green boxes. Pterosaurs are included within Ornithodira. Pink arrows point to crocs and dinos (which, sans pteros, make up the Archosauria in the large reptile tree.)

Later, Gauthier (1986, Fig. 2) noted that the position of pterosaurs and Marasuchus with respect to dinosaurs was not resolved, but found the three formed a monophyletic group he called the Ornithodira. Sereno (1991) followed and expanded on this by including Scleromochlus.

While reviewing Sereno (1991), Kellner (1996) concluded that no particular character linked pterosaurs to the Archosauria (sensu stricto), but added that because of several shared derived characters with basal dinosauromorphs, the traditional hypothesis was the best supported at the time.

Peters (2000) added several taxa (Langobardisaurus, Cosesaurus, Sharovipteryx and Longisquama) that had been excluded in prior studies to three prior phylogenetic analyses and recovered trees in which these taxa nested closer to pterosaurs than any included archosaur. Refinements to the observed morphologies and expansion in the taxon list (both chronicled in PterosaurHeresies.com and ReptileEvolution.com) have further cemented these relationships.

Ornithodira Defined
Gauthier (1986) defined “Ornithodira” as all forms closer to birds than to crocodiles. Here, based on the topology recovered by the large reptile tree (with an unmatched gamut) this definition is redundant with an earlier one (Gauthier and Padian 1985) made for Ornithosuchia.

Sereno (1991) re-defined “Ornithodira” as the last common ancestor of the dinosaurs and the pterosaurs, and all its descendants.

Ornithodira Trashed
Here, based on a larger tree that separates the pterosaurs from the dinosaurs on separate branches that divided in the earliest Carboniferous, the definition of Ornithodira is redundant with Reptilia. This can be easily tested with far fewer taxa. Not sure why paleontologists have not done so. Tradition is cozy and comfortable, but no discoveries have ever been made in comfort.

4 thoughts on “Ornithodira: Avoid this taxon!”