Yesterday we looked at the attenuation of the pterosaur tail, from tritosaur and fenestrasaur precursors like Huehuecuetzpalli and Cosesaurus to the basal pterosaur, MPUM 6009. Today we’ll look at how that hyper-attenuated tail evolved within the Pterosauria. This series was inspired by a January 2 guest blog by Scott Persons at pterosaur-net.blogspot.com in which Persons compared the tail of Rhamphorhynchus to those of dromaeosaurid dinosaurs.

Figure 1. Basal pterosaurs in the Austriadactylus/Dimorphodon line. The blue areas represent the extent of the tiny caudofemoralis. The blue arrow points to the reduced distal tail vertebrae in Peteinosaurus, a basal protoanurognathid. That’s really the only news from this clade.

The Austriadactylus/Dimorphodon lineage did not create caudal rods. The chevrons were aligned with each caudal centrum and extended the length of a single centrum. In some taxa a forward extension further lengthened each chevron. There is no vane preserved, but then no other soft tissues were preserved post-cranially. When more or less completely preserved, the tails in this clade were very long and attenuated, except when you get to Peteinosaurus, which terminates the tail with tiny bead-like vertebrae. This condition is the first stept to further reduction of all the tail vertebrae in anurognathids, convergent with the tail reduction in other derived pterosaurs.

Quick point: both tails associated with Dimorphodon are not found with Dimorphodon. They could belong to another sort of pterosaur from the same formation. Images are here and here. 1. Sedwick Museum, Cambridge J.61175,  of the Whinborne Collection. 2. Natural History Museum, London.  Specimen number 41349. Even so, the caudal rods are not developed as much as in Campylognathoides.

The reduction of the tail in anurognathids reduces the amount of mass and its moment posteriorly. One would expect a similar loss anteriorly to keep things balanced. Either that, or the toes (while standing) and/or wings (while flying) had to move anteriorly a little. I haven’t seen it yet. 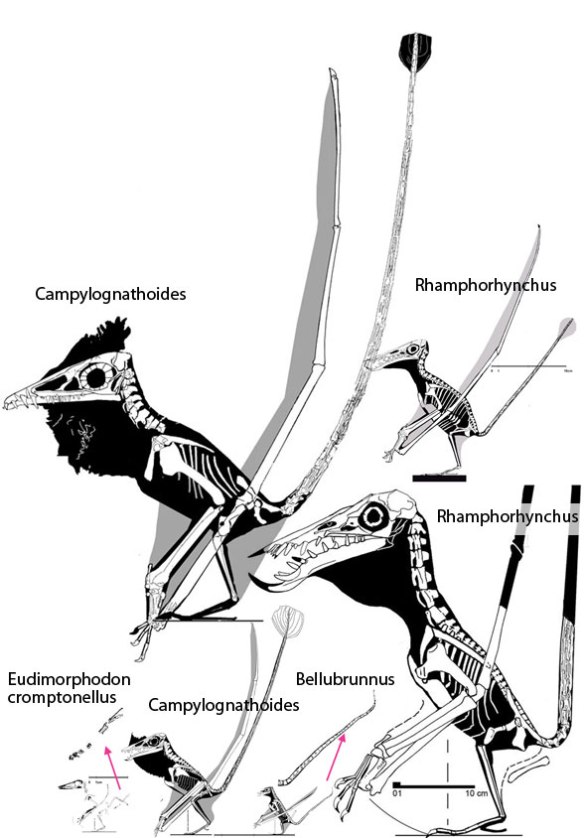 Figure 2. The tail of Eudimorphodontidae, including Campylognathoides and Rhamphorhynchus to scale. Here the convergent development of ossified caudal rods appear most strongly in the large taxa. The pattern is interrupted in small transitional taxa and reaches its acme in the largest Rhamhorhynchus. So size is key here. Larger size = thicker tail and more caudal rods.

Ossified intertwining caudal rods first develop in Campylognathoides, disappear in tiny transitional taxa, like Bellubrunnus, then reappear in Rhamphorhynchus and reach an acme of development in the largest known Rhamphorhynchus (Fig. 2). This suggests that caudal rods might have been present, but unossified when not apparent in smaller fossil pterosaurs. The data also demonstrates that both phylogeny and size determine the development of caudal rods. This clade has the best record of vane preservation, so caudal rods and vanes are correlated and sex may also have something to do with it, as described earlier.

Notably, the metronome hypothesis places pterosaurs on the ground when they do “their thang” with their highly ossified tails. Notably, dromaeosaurids were grounded Archaeopteryx descendants. So, caudal supports in both cases were NOT for aerodynamics but terra-dynamics. (Contra Persons and Currie (2012) who reported, “the unique caudal morphologies of dromaeosaurids and rhamphorhynchids were both adaptations for an aerial lifestyle.”

Next Dorygnathus and the reduction of the tail in the rest of the pterosaurs.