Earlier we looked at new nestings in the large reptile tree recovered after the addition of new data and the reexamination of old data. Today we’ll look at one more.

Everybody knows Henodus, by now.
It’s one of the weirdest of the weird placodonts, and illustrators have created vivid and lifelike images of it here, here and here. It is easy to see that Henodus (Figs. 1, 3) is distinct from the other turtle-like, shelled placodonts with pointy snouts, like Placochelys and Cyamodus. In contrast, Henodus had a wide, straight, transverse muzzle.

Everybody knows Henodus is a placodont, but what kind?
That’s been a big question mark. Their aren’t that many placodonts that are known, so the list of sister candidates is quite short, perhaps too short for smaller studies.

Rieppel and Zanon (1997) recovered two trees: one in which Henodus nested between the shelled and unshelled placodonts; the other as a sister to Placochelys.

Figure 1. Henodus, now a shelled sister to Placodus apart from the shelled Cyamodontidae with a narrow rostrum.

A new nesting for Henodus
Recent revisions to the large reptile tree that nested Colobomycter with Acerosodontosaurus also nested Henodus as a sister to Placodus (Fig. 2). They both share a wide transverse muzzle, a double convex rostral shape and several other traits. 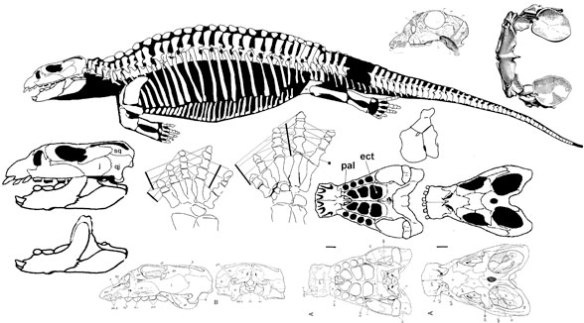 So, the shells of Henodus and Cyamodontids are convergent
And that makes sense because they are not of similar design, but independently evolved. And that goes for Largocephalosaurus and Sinosaurosphargis, which we looked at yesterday. 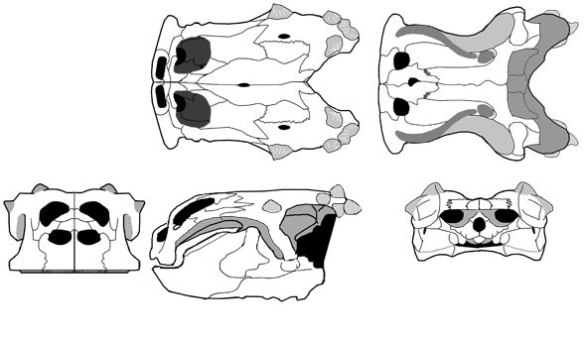 Figure 3. The skull of Henodus based on Rieppel (2002). The tiny holes in the cranium are not homologous with upper temporal fenestrae of other placodonts and diapsids. The utf has completely disappeared between the postfrontal, postorbital, supratemporal and parietal, which retains a midline fenestra.

Former mollusc eaters
Placodonts have recently been considered (Diedrich 2011) the prehistoric analog to modern sea cows, herbivorous and slow-moving sea mammals with limbs transformed into paddles. The smaller ones, like Henodus, evidently needed a little extra protection from predators.

4 thoughts on “Cleaning up mistakes – Henodus now nests with Placodus”