A recent paper by Cheng et al. 2012 describes a new Middle Triassic sauropterygian, Qianxisaurus chajiangensis, based on a virtually complete (missing some manus digits) articulated skeleton. The teeth are unusual with a slightly constricted peduncle and short conical crowns. The upper temporal fenestrae were small, smaller than in Pachypleurosaurus, an outgroup taxon in the large reptile tree, and much smaller than in Lariosaurus, its closest relative. The retroarticular process was smaller than in related taxa.

Cheng et al. 2012 nested Qianxisaurus as derived from a sister to Wumengosaurus, a taxon that nested closer to thalattosaurs, ichthyosaurs and mesosaurs in the large reptile tree. The Cheng et al. (2012) had some odd nestings including Kuehneosauridae (rib gliders) a little too close to turtles and thalattosaurs (Fig. x). The large reptile tree widely separated these taxa, as befitting their utterly distinct morphologies. 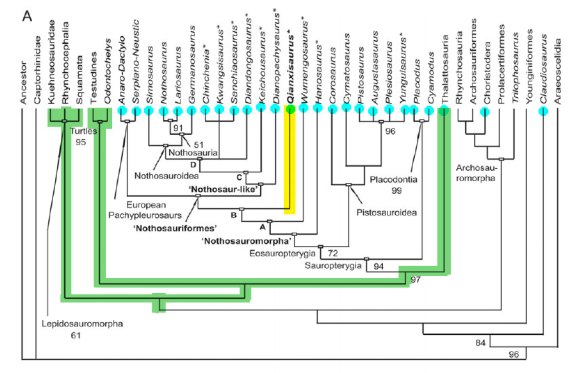 Figure x. Click to enlarge.  In response to a comment, I modified my statement about kuehneosaurs and turtles. Even so, note there are no taxa closer to the kuehneosaur/rhynchocepalian/ squamate clade than turtles and thalattosaurs in the Cheng et al. (2012) tree. This is incorrect. Some of these taxa have no business being listed here in a study of sauropterygians, like rhynchosaurs, kuehneosaurs and turtles (based on the large reptile tree). Other key taxa, like mesosaurs and Pachypleurosaurus, are missing.

There’s not a lot that should go wrong with an excellently preserved, completely articulated specimen — unless the included taxa are not related and excluded taxa are. Cheng et al. (2012) determined that Qianxisaurus was neither a pachypleurosaur nor a nothosauroid, but formed the sister group of the clade ‘Nothosauriformes’ without Wumengosaurus and Hanosaurus. The large reptile tree, employing far fewer sauropterygians, nested Qianxisaurus between Pachypleurosaurus and Lariosaurus. Pistosaurs nest as outgroups in the Cheng et al. (2012) tree, but nest as  a sister to Simosaurus in the large reptile tree, a major difference.

The present tracing of the skull of Qianxisaurus using the DGS method revealed more details and different details than in the Cheng et al. (2012) tracing (Fig. 1), including the presence of postparietals, tabulars and tiny supratemporals. The premaxilla contacted the frontals and split the nasals. Lacrimals were identified in Qianxisaurus, but these fuse to the maxilla in more derived taxa.

Figure 1. The skull of Qinxiansaurus. Below: the specimen in situ from Cheng et al. (2012). Middle: Original tracing by Cheng et al. (2012). Above: Using the DGS method other details emerge that were previously overlooked. Note the presence of supratemporals (bright green) and lacirmals (pink). Tiny inset: Pachypleurosaurus skull preserved in virtually the same configuration. The axis is re-identified and the former axis is now considered vertebra #3.

Figure 2. Interpreting the disarticulated pedal elements of Qianxisaurus. The pes thus restored is very close to that of Lariosaurus.

The skull of Pachypleurosaurus is very small, and crushed, so overlooking super tiny bones like the supratemporal can be forgiven. The much larger Qianxisaurus offers a last look at these bones before they disappear in more derived taxa. The premaxilla between the nares needs to be reexamined in nothosaurs and other pachypleurosaurs because this area is prone to damage.

The unusual teeth suggest an unusual diet, but not one that led to any great new clades.

Evidence and support in the form of nexus, pdf and jpeg files will be sent to all who request additional data. If I made any mistakes, I’ll clear them up when you send me the evidence.