Archaeopteryx, one of the most primitive birds, was among the smallest of all adult dinosaurs. But what followed Archaeopteryx was even smaller (Fig. 1). 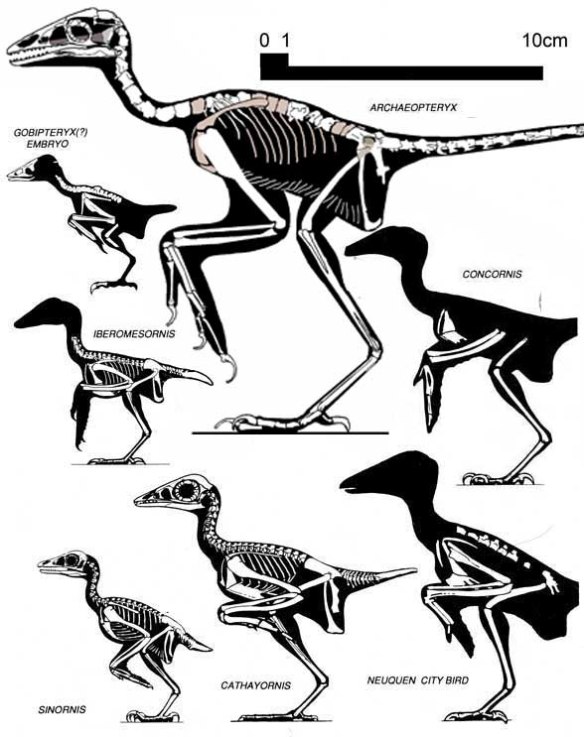 Figure 1. Archaeopteryx and several other basal birds. Here Archaeopteryx is a relative giant. This is an older illustration, predating all of the recent and now, not so recent, finds from China. The wings, sternum and tail are derived in the smaller birds. That’s the smallest Archaeopteryx, the Eichstätt specimen.

The wings lost their individual fingers in these early birds. The tail shortened, developing a pygostyle (fused tail bones). The rostrum was shorter. The orbit was relatively larger. The sternum deepened, developing toward its modern shape. These little guys were smaller, lighter and stronger flyers. They were probably very hard for a predator to catch. They could lay eggs in otherwise inaccessible places. They may have had a higher, more bird-like metabolism, with greater needs for food, and more rapid reactions. They weighed only a fraction of Archaeopteryx, so the little birds could jump and fly easier.

Evolution happens more quickly in small taxa because they grow and reproduce at a faster rate. More generations appear in less time. By flying, birds can access more environments, from trees to seashores, which also has selective effects.

Parallels in pterosaurs
Earlier we talked about various pterosaur lines that shrank and evolved into new forms prior to ultimately producing larger forms. However, pterosaur ancestors, like Cosesaurus, were not larger than early pterosaurs. They did not develop wings through serial size reduction.

Parallels in bats
Today there are megabats and microbats. The most primitive bats were small. Bat ancestors, like Ptilocercus were likewise small.

Juveniles vs. Adults
Gobipteryx was considered an embryo. If so, it would have grown to the size of Archaeopteryx. Not sure about the possible juvenile status of the others. Since birds grew up so quickly and are all about the same size, the odds are the rest represent adults.

3 thoughts on “Little Early Birds – The Tiny Descendants of Archaeopteryx”