Amniotes (= reptiles) produce different sorts of eggs (soft, flexible, rigid). Some are laid shortly after fertilization (most lizards, turtles, birds and crocs). Others are retained within the mother until just before hatching. Still others “hatch” within the mother and give way to live birth (mammals, several distinct clades of lizards, enaliosaurs, choristoderes).

Most fossil taxa are not also known from their eggs. However phylogenetic bracketing (Fig. 1) permits us a good guess as to what sorts of eggs they produced if we know what sort of eggs some clade members produced. 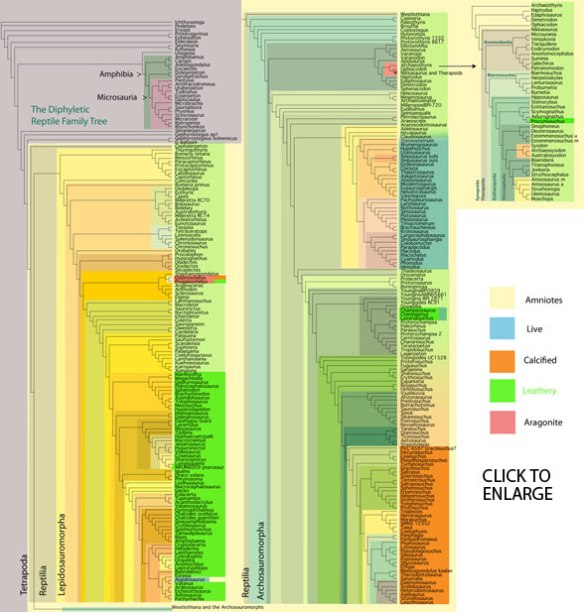 Figure 1. Click to enlarge. Eggshell trends in reptiles. Here the different types of shells permit phylogenetic bracketing of taxa for which no eggs are known. Apologies, this is not the most recent reptile tree.

Eggshells
From the Introduction to eggshells (Berkeley): “Most lizards, snakes, and tuataras lay soft eggs composed of an organic framework and poorly organized calcite crystals. These eggs collapse and shrivel after the animal hatches, and are therefore unlikely to be identified or even preserved in the fossil record.

“Many amniotes, including some lizards, snakes, and turtles, lay eggs with flexible shells. These shells differ from soft shells because of their higher mineral content. Nevertheless, preservation of flexible eggs is also rare in the fossil record.

“Some turtles and geckos, and all crocodilians, dinosaurs, and birds lay eggs with rigid eggshell. The calcite crystals form a relatively thick eggshell of interlocking shell units. Fossilization is more likely to occur in rigid eggshell because the crystalline calcium carbonate (calcite or aragonite) layer is stronger, more durable, and does not shrivel upon hatching.”

Squamates mainly lay eggs with flexible shells. All squamate eggs are flexible except for two subfamilies of gekkos. Some flexible shells contain no calcareous layer, only a shell membrane. This fibrous membrane is comprised of an irregular series of ridges and a finely woven mat of fibers on the outer surface.

Rigid-shelled Eggs
produced by crocodilians, some turtles, dibamids and gekkonids have a well-developed calcareous layer that makes up most of the eggshell and a thin shell membrane. The shell units fit together tightly and interlock.

Monotreme (Mammal) Eggshells
are soft, leathery and flexible, lacking mineralization and without a calcareous covering. Monotremes (and all mammals) are descendants of extremely tiny early mammals. Their tiny adult size affected the tiny size and composition of the eggs of subsequent mammals.

Unfortunately we know of no pelycosaur or therapsid eggs yet. We have no basal reptile eggs from the Lepidosauromoph branch either. Our best guess is they were leathery.

Enaliosaurs
The marine reptiles (ichthyosaurs, plesiosaurs, nothosaurs, thalattosaurs, placodonts, mesosaurs) were all  live-bearing. There was a recent discovery of Early Permian (280 mya) mesosaur embryos curled into egg shapes within the mother and almost the size of nearby hatchlings. Mesosaurs were either viviparous or they laid eggs ready to hatch in days or minutes, which would have been a precursor to live birth. There is no trace of any eggshell.

Figure 2. Size of the earliest known Permian Egg, full scale at 72 dpi. The mesosaur egg was similar in size.

Oldest Reptile Egg
Previous to the mesosaur egg, Romer and Price (1939) described the oldest reptile egg (Admiral Formation Artinskian, 280 mya) based on shape, size, shell-like cracks and chemistry. The internal structure of the nodes and the pattern of their distribution, the type of layering and the microstructure are not like those found in calcareous eggshells.  Hirsch (1979) determined that the reptilian egg was “soft-shelled.”

Pterosaur Eggs
The extreme thinness of pterosaur eggs is at odds with the thick calcareous eggshells of crocs and birds, their putative kin in traditional palaeontology. Their eggs alone tell us that pterosaurs are lizards, as their morphology and phylogeny confirms. The mother carried the egg until just prior to hatching as three full term embryos and one poorly ossified expelled egg from Darwinopterus.