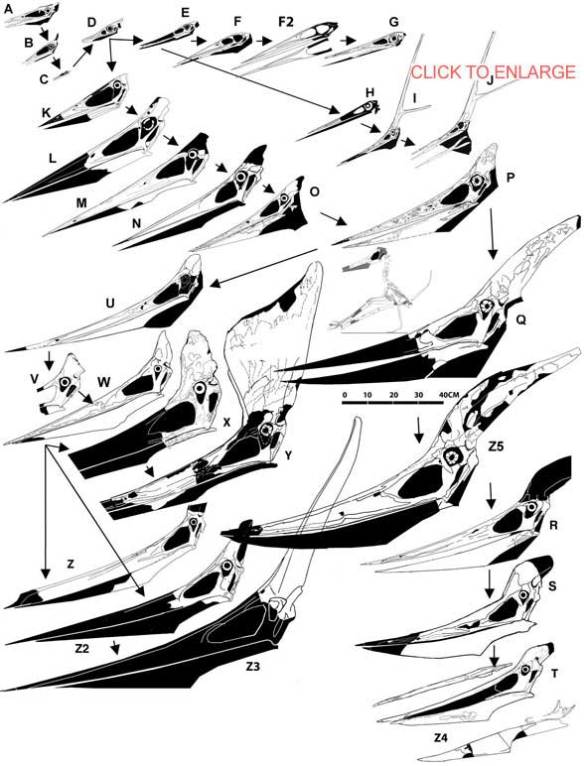 Figure 1. Click to enlarge. A family tree of Pteranodon. So many specimens do not preserve a rostrum and mandible, but many do. derived forms had an overbite. Just the opposite of Nyctosaurus, which had an underbite. Despite these differences, both had extremely sharp jaw tips, formed by sharp teeth.

Most pterosaurs had jaws of equal length.
Some pterosaurs even have interlocking teeth. However in Pteranodon there was an overbite, but only in derived specimens (Fig. 1. and from what we can tell with so few specimens preserving the beak). In Nyctosaurus, there was an underbite (Fig. 1), like a modern black skimmer. In both cases these pterosaur jaws had extremely sharp tips formed from a single tooth oriented anteriorly.

What did they do with such sharp beaks?
Whether the uppers were the sword, or the lowers, its clear that the Pteranodon/Nyctosaurus clade speared its food, like a heron does, likely on the wing at the surface of the Niobrara Sea. There’s a nice heron two-fer here. It’s probably no surprise that both of these pterosaurs descended from a heron-like progenitor like Eopteranodon. That’s where the long metacarpals came from!

Did they dive or remain airborne?
We can look at gannets and pelicans for examples of divers. The albatross remains airborne or floats while feeding. Pteranodon and Nyctosaurus were likely similar.

And speaking of crests…
Which, we weren’t, but they’re fun to talk about anyway… and may be pertinent to this discussion. Crest shape has always been a key phylogenetic trait, enabling paleontologists and interested Pteranodons to distinguish one “race” from another. What’s also interesting is the cranial size (sans crest) of specimen  Y or Z5 compared to the relative pinhead, specimen Z, which compensates with a deep rostrum, with who knows how long of an overbite.