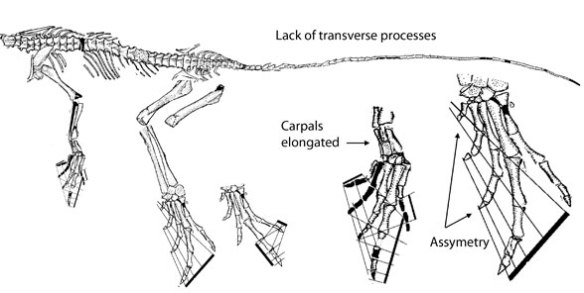 Figure 1. The post-crania of Eudibamus with enlargements of the manus and pes. PILs indicate sets of interacting phalanges. The hyper-asymmetry of the foot indicates a hyper-sprawling, rather than a bipedal type of configuration during normal locomotion. Pedal digit 5 is typically long in arboreal taxa. They use their tendril-like toes to wrap around uneven substrates. Note, however, the abbreviated unguals, something unexpected in an arboreal form. The femur appears to indicate the ability to be drawn closer to the midline of the body, a trait expected in a biped. The backbone appears stiff and robust, with centra butting up against one another.

Eudibamus cursoris (Berman et al. 2000) Early Permian ~290 mya, ~25 cm in length (Figs. 1, 2), was originally considered a relative of Bolosaurus, but here it nests at the base of the Diapsida, as old as the other basal diapsid, Petrolacosaurus. Araeoscelis has similar blunt teeth. Figure 2. Click to enlarge. Eudibamus in situ (above), traced (middle) and reconstructed (below). The revised skull retains a large orbit and has a shorter rostrum.

The forelimbs were quite a bit shorter than the hind limbs in Eudibamus. The carpals were elongated, as in Petrolacosaurus. The medial digits were greatly reduced on the manus.

Eudibamus was originally considered to be the first bipdal vertebrate due to the disparity in the lengths of its limbs. If so, it may have left impressions of only the big fourth toe when running, which was large enough to have acted independently of the others. This would be unusual in a tetrapod experimenting with bipedality, but maybe there were lots of them, most more typical. Typically when the limbs begin to swing beneath the knees, as in Biarmosuchus and Sharovipteryx, more toes tend to become more even in their lengths. The same does not hold for Eudibamus, in which the femur appears to have an offset head.

Figure 3. Gephyrostegus in anterior view demonstrating the need for shorter medial toes in tetrapods with a sprawling gait. This insures the toes to not scrape the substrate during the recovery phase and also assures that all the toes contribute to the propulsive phase. PILs drawn through interphalangeal joints indicate which phalanges work in sets as PILs typically run perpendicular to the line of progress during a step cycle. In taxa with pedal asymmetry like this the PILs indicate a sprawling gait. Click to learn more about Gephyrostegus.

The other possibility is that Eudibamus used all of its toes to walk with an extremely wide splay. Gephyrostegus in anterior view (Fig. 3) provides the reason why the digits were increasingly longer laterally in splay-legged tetrapods. All the toes have to clear the substrate on the recovery stroke. And all the toes contribute to the propulsive phase. This is taken to the extreme in Eudibamus. Perhaps it clung to tree trunks with splayed limbs, or foraged between rock cracks instead of running bipedally.

PILs (parallel interphalangeal lines) have been demonstrated to show how digits extend and flex in unison. Your own hand has PILs. In Eudibamus pedal PILs indicate an extremely wide sprawl, not a bipedal configuration. The manus was likely similar, but the medial digits of the manus are not well preserved if at all.

In Eudibamus the ankle shows no tendency to rotate on a simple hinge the way the ankle of Cosesaurus does. No sister taxa of Eudibamus are bipeds. Even so, the tibia is longer than the femur, which usually signals a bipedal gait and a rapid one at that. The torso is short. The tail is attenuate. The sacrals are in no way derived (a subject we will tackle tomorrow). Nothing about this reptile indicates a particular flattening nor deepening of the skull or torso. The unguals are short, not hook-like like the arboreal Iguana.

A Eudibamus sister, Milleropsis (Fig. 4), does have larger unguals, at least on the pes and considering the shape of that pelvis, the length of that attenuated tail and the limb and phalangeal proportions, this taxon might have made the better biped. 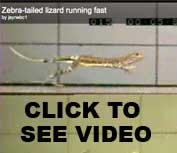 Figure 1. Click to play video. Just how fast can quadrupedal/bipedal lizards run? This video documents 11 meters/second in a Callisaurus at the Bruce Jayne lab.

Confused? So am I.
Some aspects of Eudibamus point to a bipedal configuration. Others do not. Whenever the subject of bipedal lizards comes up, it’s always good to take a refresher course with Dr. Jayne and his treadmill wonders seen here. This video dispels most biases concerning bipedal running in reptiles.

2 thoughts on “Eudibamus: Is this the foot of a biped?”