Sometimes we miss the big picture.
Here then, for your approval and disapproval are comparisons between closest kin found by the Nesbitt (2011) tree versus those found by the large reptile tree.

The origin of the Archosauria and the Dinosauria is today’s topic.
The Archosauria in the large reptile tree includes crocs and dinos, nothing else, with Lewisuchus, Gracilisuchus and Turfanoschus at their common base. See it here. 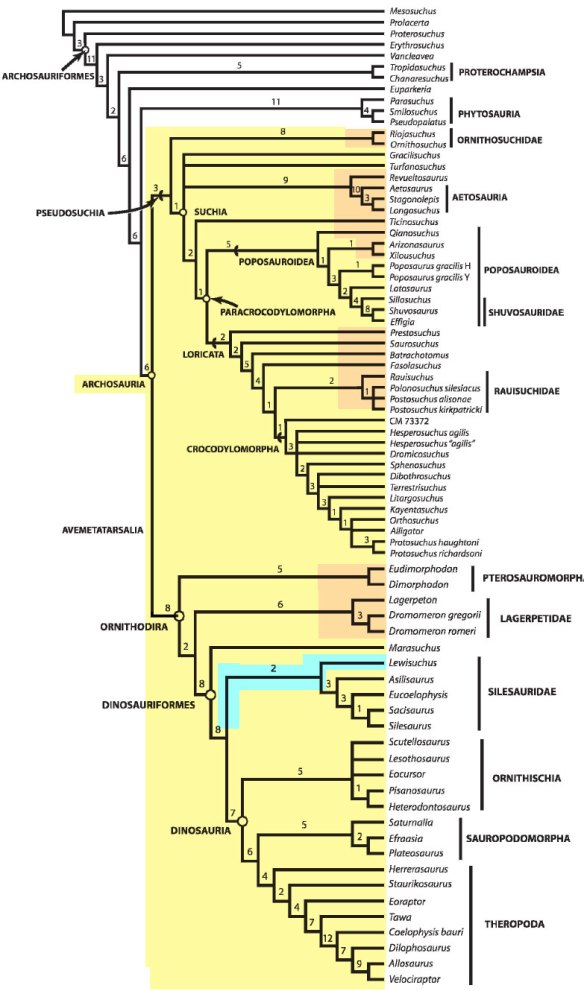 Figure 1. The Nesbitt (2011) tree with the Archosauria highlighted in yellow and Lewisuchus in blue. Taxa not in the Archosauria, according to the large reptile tree, are highlighted in orange. The large reptile tree found a similar nesting for Lewisuchus, but with the addition of more taxa, more resolution nests just crocs (including early bipeds like Scleromochlus) with dinos (which also includes silesaurs and poposaurs. Rauisuchians nest further back, closer to Euparkeria and erythrosuchids.

In the Nesbitt (2011) tree (Fig. 1) the Archosauria also includes the rauisuchians, pterosaurs, lagerpetids, ornithosuchians, aetosaurs, poposaurs (allied with Qianosuchus and the basal rauisuchian, Arizonasaurus). I thought this may have been part of the problem (see below). Furthermore, Nesbitt (2011) did not include some of the basal crocs, like Pseudhesperosuchus, Decuriasuchus and Scleromochlus. He also did not include Vjushkovia, a basal rauisuchian close to the basal crocs and basal dinosaurs. Without these key basal taxa the derived taxa are further from one another, making it more difficult to assess the gradual accumulation of traits we’re all looking for.

So, why not eliminate some of the strange bedfellows?
If we remove Mesosuchus, the Pararchosauriforms, Vancleavea and pterosaurs, we’re left with pretty much the same tree (Fig. 2). This pruned tree is in closer agreement with the large reptile tree except at the base of the Archosauria, where the aforementioned missing taxa would have nested and perhaps shifted things around a bit. Who knows? As noted earlier, the addition of several Youngina brings resolution to this problem, but it was excluded by Nesbitt (2011).

CM73372
Since CM73372 appears at the base of the crocs, just beyond the standard rauisuchia, and was first labeled a juvenile Postosuchus, I’m keenly interested in seeing this, but so far have not. Requests have been sent. No replies yet. Any jpegs would be welcome. 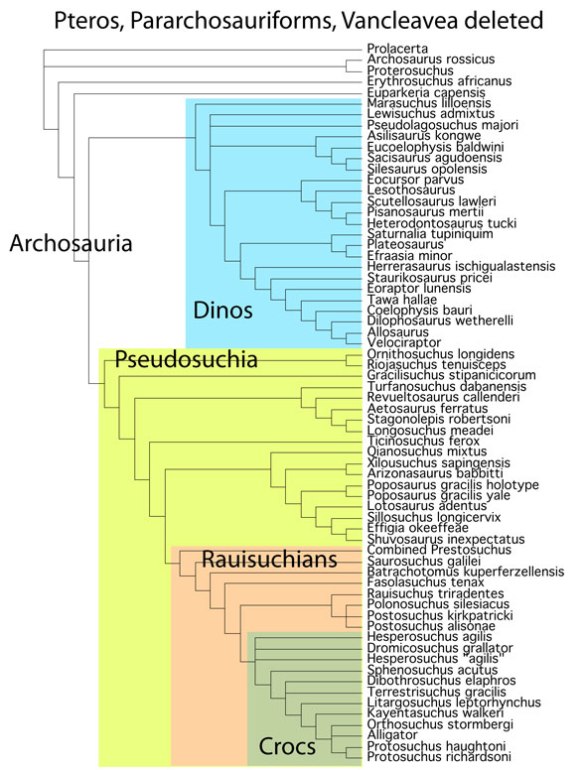 Figure 2. The Nesbitt tree without Mesosuchus, pterosaurs, pararchosauriformes and Vancleavea, taxa that belong elsewhere according to the large reptile tree. It holds together pretty well. Here Marasuchus arises more or less directly from Euparkeria. Here Lewisuchus is not so far from Gracilisuchus and Turfanosuchus, matching the large reptile tree results, almost.

Bipeds Galore!
According to Nesbitt (2011) the origin of the dinosaurs is led by one one biped after another (not to mention the pterosaurs, which most paleontologists ironically refuse to grant basal bipedal status to, due to Late Jurassic and Cretaceous footprints of secondarily quadrupedal beachcombers).

Figure 3. Basal bipedal dinosauriformes, from Lagerpeton through Marasuchus, Lewisuchus, Asilisaurus, Sacisaurus and Silesaurus, according to Nesbitt (2011). It’s easy to see why what little is known of Lagerpeton was lumped with these taxa (much of it due to hopeful glee), but its feet and ankles give it away as a Tropidosuchus sister.

The Large Reptile Tree Recovered Another Solution
This image was first published 11 months ago on a pterosaur heresies blog about the origin of the Dinosauria. It’s still pretty fresh. Note the gradual accumulation of traits in sisters that look more like each other than any competing set of candidates. 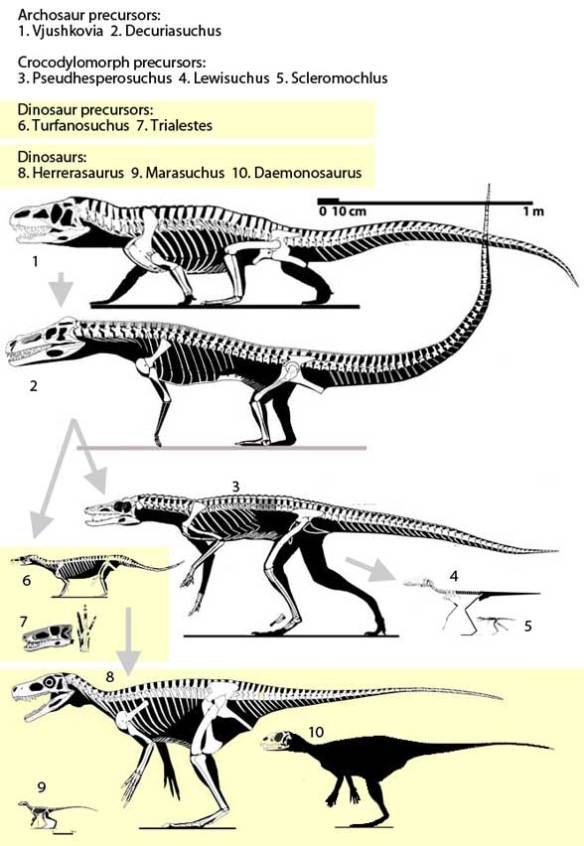 There’s more about the origin of dinosaurs here. Seems Lewisuchus was not far from the origin of the Dinosauria, and may be the best candidate, but it also may be a deadend. More bipedal crocs will help us figure this out.