Sometimes we miss the big picture.
Here then, for your approval and disapproval are comparisons between closest kin found by the Nesbitt (2011) tree versus those found by the large reptile tree. Yesterday we started at the base (Fig. 1) and the ill-advised inclusion of Mesosuchus. Today we reexamine the mistaken inclusion of Vancleavea (we did this several months ago, but differently).

Figure 1. The base of the Nesbitt (2011) tree with featured taxa in yellow.

Nesbitt (2011) included the new Triassic reptile, Vancleavea, in his list of Archosauriform taxa. It nested between Erythrosuchus and Tropidosuchus + Chanaresuchus (Figs. 1, 2). Since evolution works in minute steps, you may rightly ask, what’s wrong with this picture? 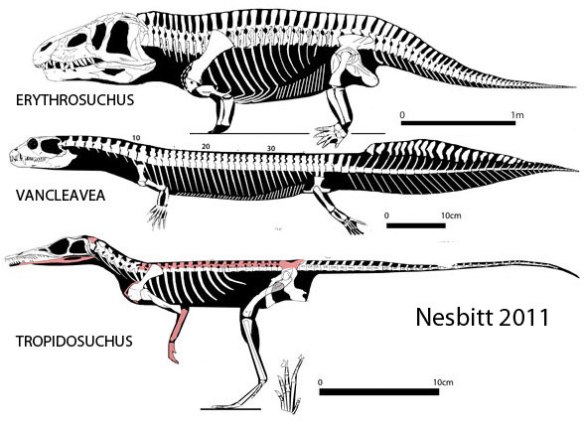 For comparison
The much larger and more inclusive large reptile tree, recovered Vancleavea with the thalattosaurs, Helveticosaurus and Askeptosaurus (Fig. 3). Nesbitt’s 2011 study did not include these sisters. 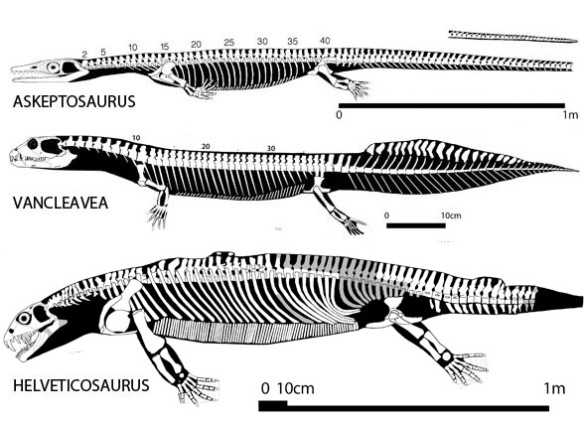 Figure 3. The closest kin of Vancleavea recovered by the large reptile tree. Askeptosaurus, Vancleavea and Helveticosaurus, all thalattosaurs unrelated to archosauriforms.

The large reptile tree also recovered Tropidosuchus with Chanaresuchus (matching Nesbitt 2011) and Lagerpeton (Fig. 4), which nests closer to dinos in the Nesbitt (2011) tree. That’s pretty far from Erythrosuchus. So the three putative sisters found by Nesbitt (2011) are all strange bedfellows.

Figure 4. The closest kin of Tropidosuchus are the much larger Chanaresuchus (matching Nesbitt 2011) and the smaller Lagerpeton. Note the distinct sizes, the shape of the pelvis nd the evolution of the foot.

Erythrosuchus
I’ll show pix of erythrosuchids and kin in a blog or two.

Remember
Fewer anatomical differences signal a closer relationship. Conversely, that means sister taxa share are a larger suite of traits. Our trees should recover sisters with a large suite of traits. By not including thalattosaurs, Vancleavea was inappropriately nested with archosauriforms by Nesbitt (2011).