Yesterday I published a bad Biarmosuchus palate based on an erroneous illustration at Palaeos, another website devoted to prehistory. Today I’ll try to rectify that error and take the process another step forward.

There are two problems I’m trying to solve.
Was Archaeothyris closer to basal therapsids, like Nikkasaurus, than the traditional therapsid ancestors, the sphenacodonts?

And did Nikkasaurus + dicynodonts and kin split from biarmosuchids and kin at the base of the Therapsida, near Nikkasaurus?

At present, both of these heretical hypotheses are recovered by the large reptile tree. However neither Archaeothyris nor Nikkasaurus, preserve the palate, to my knowledge. So we have to look at what we do have: sisters and cousins. Complicating the matter is the evolution of a more 3-dimensional palate, with a deeper vomer (in palatal view) and an advancing secondary palate coming in from the sides. Further complicating the matter is a large amount of convergence, as you’ll see. 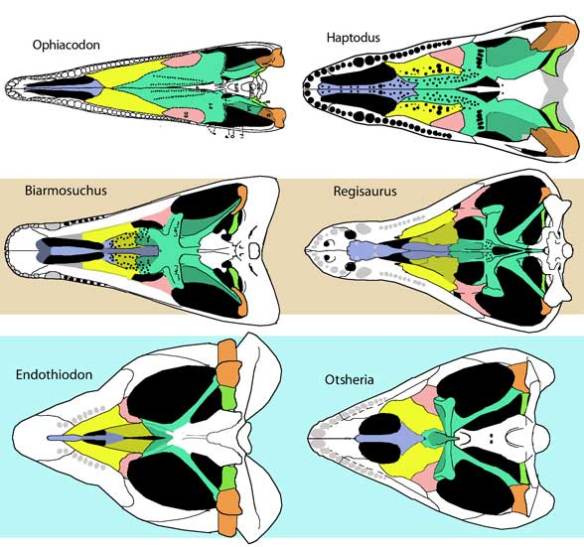 Figure 1. Six synapsid palates. Bones color-coded. With Biarmosuchus the sutures are not well-preserved, but this should be an improvement on my earlier attempt. Note the wide variety here, even in closely related taxa.

Ophiacodon and Haptodus
The palates of Ophiacodon and Haptodus are closer to one another in appearance than either is to the other four. The overall shape of the palate in Haptodus is closer to Biarmosuchus, but Ophiacodon is also much longer than the absent Archaeothyris (please remember the actual sister to the most primitive therapsids was not Archaeothyris, Ophiacodon nor Haptodus, but a missing taxon nesting close to all three and closer still to Nikkasaurus, a largely ignored late-surviving, but basal therapsid).

Yes, it’s pretty clear, neither Ophiacodon nor Haptodus makes as good of a sister to Biarmosuchus than the imaginary missing taxon somewhere in between them…something like Nikkasaurus.

Second problem: A nearly diphyletic Therapsida
Other trees find dicynodonts to be sister to gorgonopsians and both derived from dinocephalians and biarmosuchians. The large reptile tree finds dicynodonts split from all other therapsids at the base of their clade.

A suborbital fenestra is present in Regisaurus, but not in Procynosuchus, or that other taxa here. Not sure about Biarmosuchus.

The quadrates were small in Biarmosuchus and Regisaurus, but they were larger in the pelycosaurs and dicynodonts.

The choanae opened ventrally in four the synapsids, but not in  Regisaurus and Endothiodon, which had something of a secondary palate, again, likely by convergence. The choanae were displaced posteriorly in both dicynodonts and Regisaurus, likely due to convergence.

The palates of the two figured dicynodonts are not close to one another in morphology. The large variety in these six palates provides no clear guidance with regard to basal therapsid affinities. The morphological distances between these taxa is great and the palate of a key taxon, Nikkasaurus, remains unknown.

When I learn more, we’ll come back to this subject. I do know that without Nikkasaurus resolution is lost at that node in the large reptile tree. Yes, its that close and Nikkasaurus is rarely included in other phylogenetic studies.