This is a short post (literally)
Everyone goes crazy over giant azhdarchids, but the fact is most were small to tiny (Fig. 1). The cause of gigantism is still unknown, but here, among these stork-like wading pterosaurs, it certainly enabled wading into deeper waters. It is also notable that there is isometric scaling going on here. The larger ones, like Quetzalcoatlus, are not much more robust than the tiny ones, like no. 42.

Figure 1. Click to enlarge. Here’s the 6 foot 1 inch President of the USA alongside several azhdarchids and their predecessors. Most were knee high. The earliest examples were cuff high. The tallest was twice as tall as our President. This image replaces an earlier one in which a smaller specimen of Zhejiangopterus was used.

I have a date tonight and have to get to work soon, hence the brevity of this post. We’re about three weeks away from our 365th heresy.

Addendum:
Thanks to Armchair Paleontologist for noting I earlier used a smaller Zhejiangopterus specimen. That was featured later here. And below, a selection of large azhdarchids, unfortunately none of them complete as fossils. 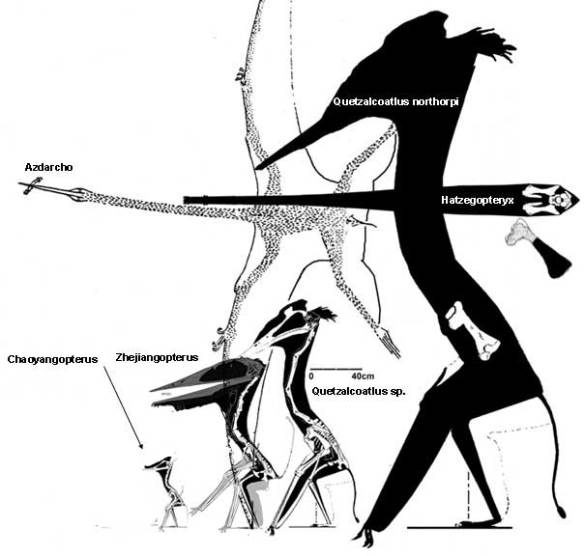 7 thoughts on “Most Azhdarchids Were Small”