A recent paper on basal synapsids (pelycosaurs) by Roger Benson (2012) reported, “Although cranial data support the current consensus that Caseasauria is the most basal clade, postcranial data and the full dataset suggest that a clade of Ophiacodontidae +Varanopidae occupies this position. Although relationships within higher clades are well supported, relationships among those clades are poorly supported.”

He also reported, “Sphenacodontia, encompasses all therapsids, including mammals.” While traditional, this needs to be rethought in light of the results of the large reptile tree which recovered therapsids from ophiacodonts close to Ophiacodon, Archaeothyris and Nikkasaurus through Stenocybus. (Sorry, not all images are up to date and include this taxon).

Roger Benson could have used the large reptile tree as a basis for taxon selection. Caseasauria are not related to Synapsida, for starters. Ophiacodonts produced therapsids. Taxon exclusion was the problem. 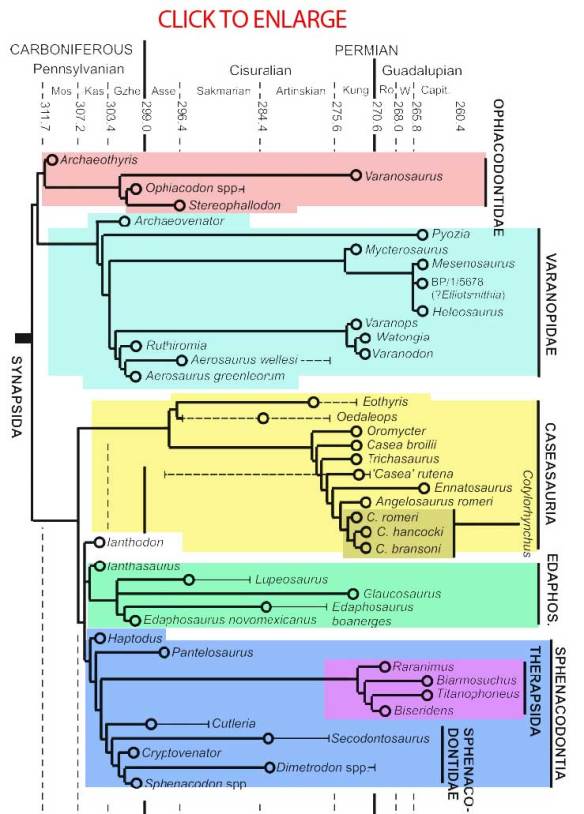 Figure 1. Click to enlarge. The Time calibrated strict reduced consensus cladogram recovered by Benson 2012. This tree assumes the Varanopidae became extinct, whereas the large reptile tree found this branch gave rise to diapsids, including living birds and crocs. The tree assumes that Casesauria are synapsids, but the large tree nests them with millerettids. The nesting of therapsids within Sphenacodontia is traditional, but lacking Nikkasaurus as a late-surviving basal therapsid obscures the relationship with Archaeothyris. The tree also lacks a series of outgroup taxa for the Synapsida.

Results of the Benson 2012 Tree
“The strict consensus of 15,552 MPTs is generally well resolved (Fig. 2A). The commonly recognized major clades of basal synapsids (e.g. Reisz 1980, 1986) are recovered. However, relationships among these clades differ from recent consensus because Ophiacodontidae and Varanopidae are the most basal synapsid clades, forming a polytomy with Archaeothyris, Echinerpeton, and a clade comprising Caseasauria + Ianthodon + Edaphosauridae + Sphenacodontia.”

15, 552. That’s a lot of trees! I don’t see Stenocybus here, the basalmost therapsid in the large reptile tree.

The Diphyletic Varanopidae
Benson 2012 recovered a clade of varanopids (Varanodon and Varanops) distinct from others (Heleosaurus, Mesenosaurus and Mycterosaurus. The large reptile tree also recovered this division. However the addition of several basal diapsids (Petrolacosaurus, Eudibamus, etc.) indicate these were basal synapsids, more basal than Archaeothyris, the earliest known synapsid, and not far from the Heleosaurus clade, which probably should not be included within the Varanopidae, despite a close relationship.