Earlier we demonstrated pterosaurs grappling tree trunks and perching on tree branches. Today we’ll report on the origin of this behavior in Longisquama (Fig. 1). 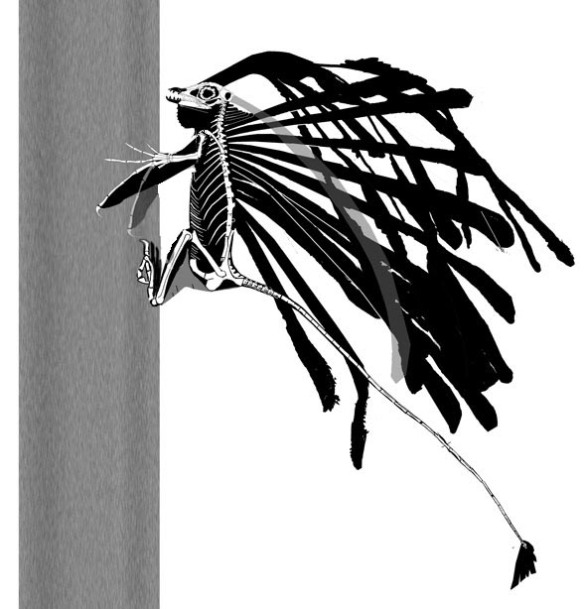 Figure 1. Longisquama on a tree trunk.

My What Long Fingers You Have Grandma!
The origin of tree clinging likely occurred in sister to Longisquama, the current outgroup for the Pterosauria. The fingers of Longisquama were larger than those of any pterosaur. Fingers one through three and five became smaller as the wing finger, #4, became larger.

The PILs Have Something to Say
In Longisquama the PILs of manual digit 4 were not aligned with those in digits 1-3. This indicates they no longer worked as a set and that metacarpal 4 + digit 4 likely were rotated into the plane of the wing, as in pterosaurs. This means, like pterosaurs, Longisquama was able to flex (or hyperflex) digit 4 in the plane of the wing and while clinging to trees, the wing would have created yet one more display trait, opening and closing tangential to the diameter of the tree trunk. Pterosaurs emphasized the wings and de-emphasized the dorsal frill.

Short Arms
The relatively short arms of Longisquama meant that the long legs had to crouch more, which created a pre-loaded spring ready to release for the next leap/glide. The arms lengthened in pterosaurs.

Finger 4 – Not Quite Ready for Flight, but Great Looking!
Before finger 4 became large enough to support gliding and flapping flight it served as yet ANOTHER decoration on Longisquama, already at no shortage for display traits. As in pterosaurs, finger four was free to flex in the plane of the wing, on a tangent to the diameter of the tree (Peters 2002). I did not realize at the time of that publication how large the fingers of pterosaur predecessors, like Longisquama, had become.