Hone and Benton (2007, 2009) set out to see if archosaurs or purported prolacertiforms nested closer to pterosaurs by taking prior studies and lumping them together to create a supertree (Fig. 1). Basically they wanted to match Bennett (1996) against Peters (2000) the only two studies that included pterosaurs. Bennett (1996) did not employ Langobardisaurus, Cosesaurus, Sharovipteryx and Longisquama, taxa which Peters added to prior studies by Evans (1988), Jalil (1997) and the competing study by Bennett (1996). Peters found that adding one or all four to prior studies nested them them closer to pterosaurs than any archosaur. These were the first analyses I ever attempted. I had seen the specimens and, like Ellenberger (1993), I made several errors in interpretation. Later corrections to those errors further cemented the earlier results.

The Weak Jalil (1997) Study
The weakest of the three studies employed and modified by Peters (2000), that of Jalil (1997), was reprinted as a strict consensus tree by Hone and Benton (2007). The addition of the four taxa destroyed much of the resolution in that study, yet, even so the basal pterosaur, Eudimorphodon, nested closer to Cosesaurus and the fenestrasaurs than to the archosaurs, Lagosuchus (Marasuchus), Scleromochlus and Proterosuchus. The other two modified studies retained substantial resolution. Looking again at the tree recovered by Jalil (1997), I can see why the addition of several taxa destroyed his resolution. According to the large reptile study, several of his purported sisters were not related to each other yet nested together for reasons only Jalil knows.

For reasons discussed in Hone and Benton (2007) they decided to delete the study by Peters (2000) in their 2009 paper. They also deleted every reference to Peters (2000) and falsely gave Bennett (1996) credit for the prolacertiform hypothesis. Why? Remember their purpose was to compare archosaurs to prolacertiformes. And by deleting Peters (2000) they would have had a problem if not for making that switch. Unfortunately, now instead of comparing apples to oranges they were comparing apples to virtually nothing (see below). Results from the Hone and Benton (2009) tree are presented below.

The Hone and Benton (2009) Supertree
All that backstory aside, today the subject is the supertree itself. Does it provide insight into the origin of the pterosaurs? Do we see in more primitive taxa a gradual accumulation of pterosaurian traits? Are there any “red flags” (= obvious mismatches) in the results? Here’s their supertree in black. I added the colors to connect sisters recovered in the large reptile study. 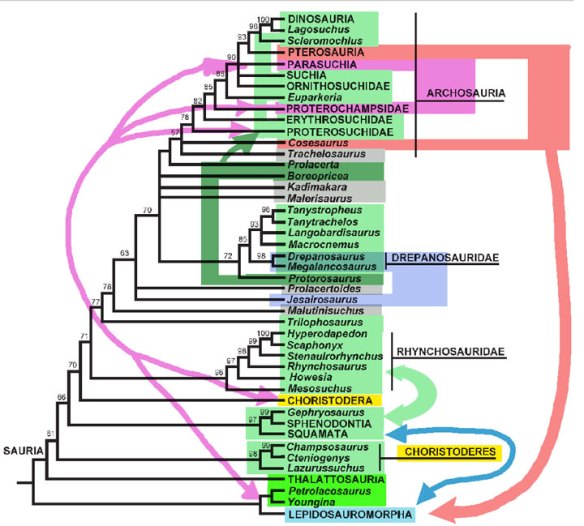 Starting at the bottom
It’s always a problem employing suprageneric taxa, like lepidosauromorpha. Which lepidosauromorph do you use as an example? A mosasaur? A cobra? Or a horned toad?  The most interesting aspect of this study is the fact that “Lepidosauromorpha” nests here several nodes away from “Squamata”, “Sphenodontia” and “Gephyrosaurus,” three lepidosauromorphs!! This is a freshmen mistake that was not caught in the creation, review or editing processes.  Before we move, let’s acknowledge a few of those who helped produce Hone and Benton (2009).

Dr. Hone also reports, “This work formed a substantial part of a PhD thesis and completed at the University of Bristol, Department of Earth Sciences.”

Unfortunately, That’s Not the Only Obvious Error
Moving up the tree now, three taxa nest under the heading “Choristoderes:” Champsosaurus, Cteniogenys and Lazarussuchus. Unfortunately, another oversight: These three were nested two nodes away from a clade known as the “Choristodera!!” Hmm. Two strikes.

When Hone and Benton (2007) reprinted the Jalil (1997) re-study by Peters (2000), they reported, “No branch support figures were given.” Note that none are provided in their tree either.

Rhynchocephalians and Rhynchosaurs
The sphenodontians (rhynchocephalians) and rhynchosaurs were long ago considered sister taxa, then this was disputed by Dr. Mike Benton (1983). Here, however they nest as virtual sisters again, separated only by a misplaced “Choristodera.” Sans the bogey, such a clade was also recovered by the large reptile tree. This is important, but went ignored. (It actually wasn’t key to the subject matter.)

Scrappy Prolacertiformes
Moving up the tree, Hone and Benton (2009) employed several obscure purported prolacertiform specimens known only from scraps, Malutinisuchus, Prolacertoides, Kadimakara and Tracelosaurus. Not surprisingly, there’s a loss of resolution at these nodes. I can’t say much about these. I’ve seen only Kadimakara in its namesake book and there’s not much to say about the maxilla and partial mandible. (We’ll throw it into the tree in a future blog.) Certainly these scraps add nothing to the study of the origin of pterosaurs. These are the taxa that should have been deleted, but alas…

Not Prolacertiformes Anymore
Everyone considered and virtually all experts still consider Macrocnemus, Tanystropheus, Tanytrachelos and Langobardisaurus to be “prolacertiformes,” but no prior paleontologist ever tested them against Huehuecuetzpalli and its basal lizard sisters. When many more taxa are all included, as in the large reptile study, the Tritosauria nest on opposite sides of the tree from Prolacerta and Protorosaurus, despite a convergent long neck. This is the kind of insight you discover when you expand the dataset, create your reconstructions and avoid suprageneric taxa.

Archosauriform Ancestor?
The Hone and Benton (2009) study recovered Cosesaurus at the base of the Archosauriformes, basal to Proterosuchus and the rest of the clade. This is odd and unique! NEWSWORTHY!! No one has ever recovered this pairing before and it would seem to be important  – if true! Unfortunately no traits connect tiny Cosesaurus to the much larger Proterosuchus. It’s another ‘by default’ nesting, but note that Proterosuchus had an antorbital fenestra and it purported sister, Cosesaurus, was scored without one. So close!!! The large reptile study linked hook-snouted Proterosuchus with Youngina, but the Hone and Benton (2009) study separated these two by nearly the breadth of the entire presented tree.

Finally we get to the Pterosaurs and their Ancestors: the Parasuchians???
Lots of current studies (Sereno 1991. Brusatte et al. 2010,  Nesbitt et al. 2011) recover this pairing: parasuchians basal to pterosaurs. Just let that sink in for a moment. Anybody see any RED FLAGS here? How did THIS get through review?? Just think of the outcry if I had published such rubbish?

Even though Dr. Hone and Dr. Benton discovered that pterosaurs arose from a sister to parasuchians, surprisingly they do not devote a single word describing the traits shared by these two, extolling their virtues or ringing a bell in celebration of a decades old search now complete.

Why not?
[You can figure this out for yourself. One look is all it takes. It’s yet another bogus nesting by default.]

What forces were at work here?
Was there a preconceived notion that drove the various decisions that Hone and Benton (2007, 2009) made? Why would they simply delete the competing taxa instead of studying them to produce their own scorings? What a coup it would have been to discover the long sought ancestors of pterosaurs.

Dr. Benton (1999) had just published on the affinities of Scleromochlus and pterosaurs, ignoring the many traits that would ordinarily have discredited such an unlikely relationship. When amateur Peters (2000) came up with four previously untested taxa, all phylogenetically closer to pterosaurs than Scleromochlus, what plots must have hatched then? Sadly the fenestrasaurs have been systematically ignored or misdiagnosed with cartoon-like reconstructions. No one likes these taxa, no one speaks of these taxa, and no one has been able to argue successfully against them either.

Dr. Hone and his friends have taken their tree and run with it, considering it gospel, despite its many problems. Even so, at the end of the day Dr. Hone seems to be only lukewarm about his own results. He still wonders where pterosaurs came from, unwilling to promote the parasuchians and equally unwilling to consider the possibility that any of the taxa from the lepidosauromorph branch, including turtles and fenestrasaurs, nest closer to pterosaurs than does Scleromochlus or parasuchians.

Some Good. Some Bad. Nothing to Hang Your Hat on Though.
The Hone and Benton (2009) supertree has some valid nestings that match the large reptile tree, but lots of bad science also slipped through. Certainly little to no effort was made to create a list of taxa with an increasing number of pterosaurian traits, which Peters (2000, 2002, 2009) produced. Today that list continues to become larger and richer.

I can’t believe that anyone thinks parasuchians were really ancestral to pterosaurs, but you see it time and again in the trees. No one talks about it though. At some level they must know there’s a problem, which is why most popular writers hold to the opinion that pterosaurs appear in the fossil record without obvious precedent.

References
Bennett SC 1996. The phylogenetic position of the Pterosauria within the Archosauromorpha. Zoological Journal of the Linnean Society 118:261-308.
Benton MJ 1983. The Triassic reptile Hyperodapedon from Elgin, functional morphology and relationships. Philosophical Transactions of the Royal Society of London, Series B, 302, 605-717.
Brusatte SL , Benton MJ , Desojo JB and Langer MC 2010. The higher-level phylogeny of Archosauria (Tetrapoda: Diapsida), Journal of Systematic Palaeontology, 8:1, 3-47.
Evans SE 1988. The early history and relationships of the Diapsida. In: M. J. BENTON (Ed.), The Phylogeny and Classificationof the Tetrapoda. 1. Amphibians, Reptiles, Birds. Systematics Symposium Association Special Volume; Oxford (Clarendon Press), 221–260.
Hone DWE and Benton MJ 2007. An evaluation of the phylogenetic relationships of the pterosaurs to the archosauromorph reptiles. Journal of Systematic Palaeontology 5:465–469.
Hone DWE and Benton MJ 2008. Contrasting supertree and total evidence methods: the origin of the pterosaurs. Zitteliana B28:35–60.
Jalil N-E 1997. A new prolacertiform diapsid from the Triassic of North Africa and the interrelationships of the Prolacertiformes. Journal of Vertebrate Paleontology 17(3), 506-525.
Nesbitt SJ 2011. The early evolution of archosaurs: relationships and the origin of major clades. Bulletin of the American Museum of Natural History 352: 292 pp.
Peters D 2000a. Description and Interpretation of Interphalangeal Lines in Tetrapods.  Ichnos 7:11-41.
Peters D 2000b. A Redescription of Four Prolacertiform Genera and Implications for Pterosaur Phylogenesis. Rivista Italiana di Paleontologia e Stratigrafia 106 (3): 293–336.
Peters D 2009. A reinterpretation of pteroid articulation in pterosaurs. Journal of Vertebrate Paleontology 29: 1327-1330.
Sereno PC 1991. Basal archosaurs: phylogenetic relationships and functional implications. Journal of Vertebrate Paleontology 11 (Supplement) Memoire 2: 1–53.