Dr. Paul Ellenberger (pronounced “El-len-ber-zhay”) spent a large part of his life attempting to link a tiny Mid-Triassic fossil reptile, Cosesaurus aviceps, to birds. He considered it a precursor to Archaeopteryx in the years just following the publication of Ostrom (1969) on Deinonychus. Ellenberger published two small papers (Ellenberger and de Villalta 1974, Ellenberger 1978) and a very large (664 pp.) unpublished tome (Ellenberger 1993) on this little reptile perpetually entwined with an amorphous jellyfish. No one has spent more time studying Cosesaurus than Ellenberger. No one has put more effort into describing it and photographing it from every angle in the most precise detail.

Figure 1. Cosesaurus aviceps at close to actual size. The blob next to it is a jelly fish. No actual bones are preserved. Cosesaurus is nothing but a deep impression faithfully preserving every aspect of its skeleton down to the finest soft tissue details. The tail is especially deep, which created the impression, when transferred to 2-D, of emanating feathers. Tomorrow the same image will be presented but flipped 180 degrees.

Even so…
Ellenberger (1993) got many things wrong. He had a mistaken preconception and that biased his observations. It can happen. I’ve seen it happen to the best paleontologists out there. Following tradition is easy, but it leads to problems. Testing tradition is good science. Distrusting the validity of autapomorphies is key. Phylogenetic analysis trumps all.

The Power of Pet Ideas
Ellenberger’s (1993) bird hypotheses were never taken seriously or supported by other writers in the literature. Nevertheless, Ellenberger created a body of data leading to an interest in the taxon that launched Cosesaurus in a new direction for me. It never occurred to Ellenberger to link Cosesaurus to Sharovipteryx, Longisquama and pterosaurs. I raised the subject with him after seeing Cosesaurus in Barcelona and while staying with Paul for a day or two at his home in Montpellier, France. Ellenberger didn’t like the idea (because it didn’t support his bird hypothesis), and he didn’t want to discuss it.

Giving Credit
Well, we’re going to explore Dr. Ellenberger’s view of this little predecessor taxon. The point of this report is to give credit where credit is due and to shine a light on any mistakes. 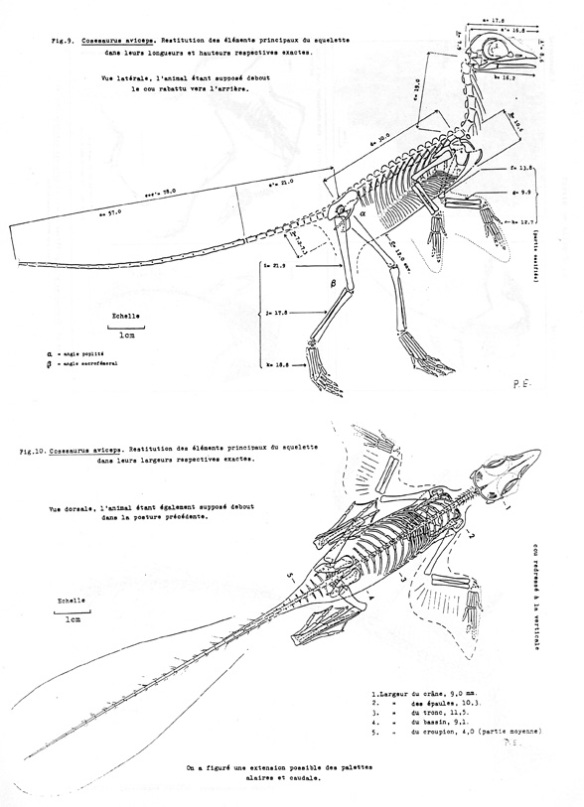 Figure 1. From Ellenberger 1993. Overall view of Cosesaurus aviceps in standing pose, lateral and dorsal views. Note the bird-like restoration, a little too erect with hands flipped to more closely match the hands of birds. Other problems in the pectoral and pelvic regions will be discussed in part 2 of this blog tomorrow.

Ellenberger’s Reconstruction of Cosesaurus
Ellenberger saw Cosesaurus as a bird precursor, therefore he saw it as a digitigrade narrow-gauge biped. These are all true. Matching footprints (Rotodactylus) are evidence (Peters 2000). Despite being a footprint expert, Ellenberger (1993) did not consider a match of Rotodactylus to Cosesaurus. He did not produce an illustration with a bent-back pedal digit 5, which would have completed the match (Fig. 5).

Figure 2. The brain of Cosesaurus and the binocular vision reported by Ellenberger (1993). Note the elongated antorbital fenestra above the maxilla and below the prefrontal/nasal. The naris is indicated by two short lines here, better viewed in figure 3 (lower of the two skulls).

Figure 3. The skull of Cosesaurus in two lighting conditions with the antorbital fenestra and dorsal/cranial fibers/frill visible in the upper photo. From Ellenberger (1993). Also note the premaxilla crest in front of the orbit.

The Antorbital Fenestra
Ellenberger (1993) reported an antorbital fenestra in Cosesaurus and his images (Fig. 3) confirm that. I also confirm that, having seen the fossil in Barcelona.

By contrast, Sanz and Lopez-Martinez (1984) said there was no antorbital fenestra and considered Cosesaurus a juvenile Macrocnemus (Fig. 4). They also missed dozens of other traits that distinguish Cosesaurus from Macrocnemus (Fig. 5). They illustrated Cosesaurus in an inaccurate cartoonish fashion virtually identical to a cartoon Macrocnemus without any distinguishing traits other than a shortened rostrum, not realizing that in this clade hatchlings are virtually identical to adults. Altogether the Sanz and Lopez-Martinez (1984) report can be considered dated, biased and bogus because they didn’t put the effort in that was needed to trump earlier data by Ellenberger.

The same can be said of the Senter (2003) dissertation that reported no antorbital fenestra, even though he illustrated one, again in cartoonish fashion. I don’t understand how scientists can be so blinded by paradigm and bias that they cannot report the presence of an antorbital fenestra in Cosesaurus (Fig. 3). Unfortunately others (Evans 1988, Hone and Benton 2008) used the bogus data in phylogenetic analysis, preferring those simplified drawings to the precision of Elleberger (1978, 1993) and Peters (2000) or their own examinations(!)

Figure 4. Cosesaurus illustrated as a juvenile Macrocnemus by Sanz and Lopez-Martinez (1984).

Binocular Vision
Ellenberger determined that the large eyes of Cosesaurus poised over the small rostrum probably delivered 50 degrees of overlapping vision. That seems reasonable and sets Cosesaurus apart from Macrocnemus.

The Teeth
Ellenberger reported the upper and lower three posterior teeth in the jaws of Cosesaurus were different that the others: broader and less pointed. These were precursors to the multicusped teeth found in derived fenestrasaurs.

The Naris
Ellenberger reported a slit-like naris in Cosesaurus, displaced from the snout tip. Such a naris is also found in all descendants of a sister to Huehuecuetzpalli, including pterosaurs and tanystropheids.

The Jaw Tip
Ellenberger considered the extended jaw tips to be beak precursors. The skull was also longer than the tooth row in the more primitive lizard, Huehuecuetzpalli. In more derived fenestrasaurs teeth protruded from the anterior jaws.

Figure 5. Current interpretation of Cosesaurus. Click to enlarge. Post-crania will be presented tomorrow.

Jugal
Ellenberger (1993) correctly illustrated a jugal with a new quadratojugal process in Cosesaurus.

Occiput
Ellenberger (1993) reported the occiput leaned posteriorly, which would have been appropriate for a reptile standing erect on hind limbs, whether bird ancestor or pterosaur ancestor.

Palate
Ellenberger illustrated as much of the palate as was visible and it was essentially correct and similar to that of pterosaurs, as reported earlier.