One of the most beautiful and spectacular pterosaur fossils I have ever seen has just been unveiled. Frey and Tischlinger (2012) describes a Rhamphorhynchus (WDC CSG 255) with its belly full of fish and its throat stuffed with a recently swallowed fish entangled with a larger fish, Aspidorhynchus.

Wow! Rare! Gorgeous! Spectacular! …and that’s only the start for this exciting fossil.

[PterosaurHeresies.com will always go the extra mile – with evidence.]

Figure 1. Rhamphorhynchus entangled with Aspidorhynchus. Both complete and articulated. Inside the belly of Rhamphorhynchus are several smaller fish. Inside its throat is another. Image from Frey and Tischlinger (2012). You can see the five smaller slabs that were reattached to one another to recreated the entire slab.

The Scene Frozen in Time
Frey and Tishclinger (2012) report, “Rhamphorhynchus was seized during or immediately after a successful hunt.” Both specimens died during the encounter and sank together to bottom of the lagoon where they were preserved intact in Solhnfofen limestones. Stomach contents from this and other Aspidorhynchus specimens have never revealed pterosaur contents, so this encounter may have been more out of idle curiosity on the part of the fish. The authors report, “The fish tail yet sticking in the pharyngeal region of the throat and the excellent preservation of the tiny fish without any trace of digestion suggests that swallowing was not completed and that the Rhamphorhynchus was alive and airborne during the attack.

‘The Aspidorhynchus apparently attacked from in front when the Rhamphorhynchus still flew low above water surface, grabbed the left wing level with the distal end of the antebrachium close to the carpus and pulled the pterosaur under water.

‘Obviously, the fish was neither able to swallow the pterosaur, neither was it able to get rid of its oversized victim.” 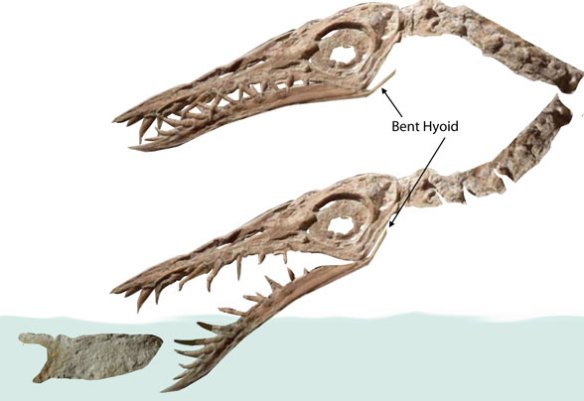 Figure 2. Manipulating the bones of the fish-eating Rhamphorhynchus into a skimming configuration while staying airborne. The bent hyoid appears as if it could have acted like a stop to prevent the lower jaw from opening too far due to hydrodynamic drag while skimming. The long, sharp, anteriorly-oriented teeth have long been considered ideal for fish trapping.

Skimming
Frey and Tischlinger (2012) report, “The specimen presented here firstly proves evidence that the Late Jurassic pterosaurs of the genus Rhamphorhynchus actively hunted fish by grabbing or skimming them out of the water thereby closely approaching the water surface due to their short necks.”  The bent hyoid (Fig. 2) appears as if it could have acted like a stop to prevent the jaw from opening too widely due to hydrodynamic drag while skimming. 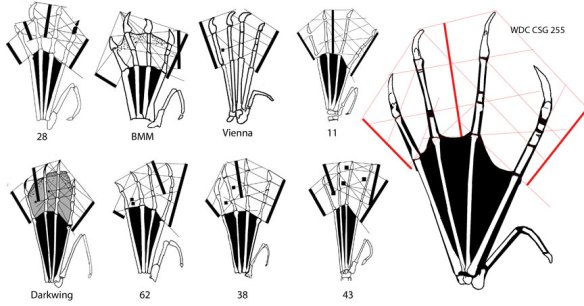 Figure 3. Click to enlarge. A selection of Rhamphorhynchus feet compared to the new one associated with a large fish. Note the morphological differences exhibited by the new specimen, WDC CSG 255 (far right). Note the brevity of pedal digit 5, the relative lengths of the metatarsals and the relative lengths of the phalanges, especially p3.2. Despite the differences with these eight other rhamps, the PILs (parallel interphalangeal lines) in the WDC specimen are all continuous.

Interesting Tidbits
The foot of this specimen (WDC CSG 255 – Fig. 3) did not match the feet of other Rhamphorhynchus specimens, which also did not match each other. The differences are subtle, yet suggest speciation within this genus, despite the apparent overall match (which has yet to be compared with reconstructions) to the darkwing specimen of R. muensteri.

Close-Ups
Closeup photos of the wingtips and metacarpus were requested, but none have been forthcoming. Such a complete specimen should show wing tip unguals and a vestigial manual digit 5, which tentatively appear in the present photographs. The pedal 5 ungual is present (Fig. 2), a bone typically overlooked in all other pterosaurs, but present nevertheless (Peters 2011).