Current thinking in Darwinopterus separates the crestless female (with the egg between her legs) from the crested (with no egg nearby) purported male(s).

The Local Heretic agrees that the one with the egg is a female, but the female does not appears to be conspecifc with the other specimens attributed to Darwinopterus (Figs. 1 and 2). Some had a longer skull. Some had a distinct pelvis. Some had a distinct humerus. Others displayed a subtle variety of modifications throughout the body (Fig. 2).

The Pelvis
Lü et al. (2011a) did not reconstruct the crushed pelves of the various darwinopterids, so their assertion that the pelvis of the female has not been substantiated. I have found no deepening/reduction of the pelvis in any pair of otherwise identical pterosaurs. All differences reflect distinct traits elsewhere in the skeleton, denoting specific and generic differences, not gender differences.

While Darwinopterus is often preserved in excellent articulated condition, some specimens are crushed dorsoventrally or otherwise imperfect, making certain traits difficult to compare. Even so, the darwinopterids illustrated here are each distinct from one another. Kunpengopterus, with its relatively small skull, was closest to the outgroup taxon, Pterorhynchus. 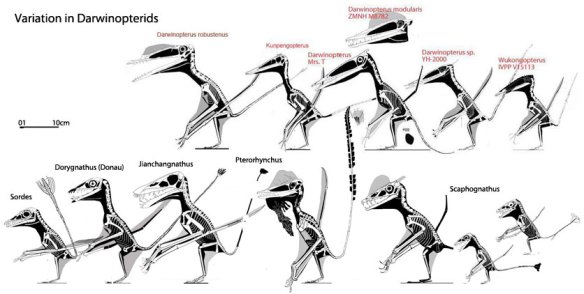 Figure 1. Darwinopterids and their closest sisters in phylogenetic order beginning with Sordes. Click to enlarge.

Take a Closer Look at the Feet
Placed side-by-side Darwinopterus pedes display traits that separate them into distinct species. Some elements are longer, others are shorter. Each is distinct. No two look to be close enough to represent separate genders.

Figure 2. Darwinopterus pedes demonstrating speciation in the proportions of phalangeal elements. The metatarsal spread was likely variable from moment to moment.

To Lump? Or Split?
A similar lump/split problem appears in Germanodactylus, Pterodactylus, Rhamphorhychus and Pteranodon, among others. Sometimes paleontologists lump inappropriately. Sometimes they split inappropriately. It was forgivable prior phylogenetic analysis when specimens arrived one at a time and infrequently. Now, however, every new specimen has to be nested.

The Value of Reconstructions
None of the various darwinopterids published so far have been reconstructed by those who had access to the specimens and contributed to those papers. Perhaps only reconstructions can illuminate these important differences, if only because they force a closer look at each specimen. It is also important to always nest each new specimen with cladistic analysis. Unfortunately reconstructions are rarely (if ever) produced nowadays. And details, like the proportions of pedal elements, are typically ignored. Analyses typically lump specimens together a priori rather than let each one stand alone for more precision and less compromise.