The smallest known pterosaur B St 1967 I 276 (No. 6 of Wellnhofer 1970 ) was discussed earlier. Today we get to meet maybe the second smallest pterosaur, Pterodactylus meyeri BMNH 42736 (Munster 1842, Fig. 1) is the same size as No. 6, but had several distinct traits (Fig. 2). I ran across the BMNH specimen in Unwin’s (2006) The Pterosaurs From Deep Time book on page 151. Dr. Unwin considered the specimen a “flapling” (= newly hatched pterosaur able to fly) with a wingspan of 17 cm, so that is the reconstructed scale (Fig. 3).

The Value of a Reconstruction
It’s a shame that modern workers don’t produce reconstructions of crushed pterosaurs anymore. There is so much to see (Figs. 2, 3), especially when one compares similar specimens. Many traits would go unnoticed if left crushed.

Figure 1. One of the world's smallest pterosaurs, traced from Unwin (2006, p. 151). The feet of the "flapling" were not articulated and a certain amount of guesswork was applied to the idenfication of the pedal elements and their reconstruction. Note how the left radius and ulna are parallel to and beneath the elongated right scapula. The right coracoid is largely beneath the right humerus. The left hand and proximal wing finger are beneath the right hand. Soft tissue stains are highlighted in orange. The wing had a narrow chord at the elbow. Colorizing the bones is a result of employing DGS, digital graphic segregation.

Phylogenetic Nesting
Here the “flapling” nested between No. 6 and No. 12, two other tiny ornithocephalians (and former Pterodactylus) outside of the Pterodactylus lineage, at the base of the Germanodactylus clade. Conveniently (for those looking for transitional taxa) No. 6 was smaller and No. 12 was larger than the BMNH “flapling.”

Distinct from No. 6, the “flapling” had a deeper skull, more and smaller dorsal vertebrae and ribs, a longer scapula (almost touched the pelvis), a deeper and more fully fused pelvis and a larger sternal complex than either of its sisters. Considering the reconstructed differences in quadrate elevation, jugal shape and pelvis dimensions (Fig. 2), you might think the “flapling” would have nested further apart from No. 6 and No. 12. These distinctions suggest that the “flapling” may have been at  the base of its own clade of currently unknown descendants. 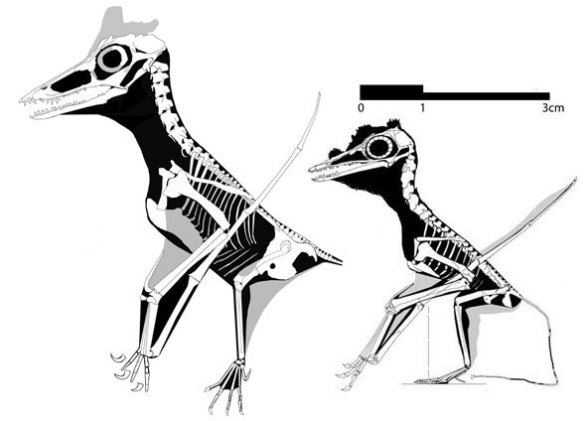 Juvie or Adult?
If the BMNH tiny pterosaur was indeed a juvenile of a larger more established taxon, which one did it match up to? And if so, why did it nest with other tiny pterosaurs? No. The BMNH specimen was an adult. The many autapomorphies (= differences) in the “flapling” also follow a larger trend seen in other tiny pterosaurs: morphological innovation.

Figure 3. Full scale image of ginkgo leaf and the two smallest pterosaurs to scale on a 72 dpi screen. Yes, these are tiny, but just look at the size of a hatchling on the far right, no bigger than a small fly.

Special Premaxillary Teeth
In the BMNH “flapling” we see more substantial anteriorly-directed medial teeth forming the tip of the premaxilla. Those two teeth evolve to become one in the rostral tip of Germanodactylus. That tooth is the only one retained in so-called “toothless” pterosaurs like Pteranodon and Nyctosaurus that have sharply tipped jaws.

Bigger Eggs?
A deeper pubis and pelvis in the BMNH specimen could have produced a larger egg. A stronger sternal complex and longer scapula could have made the “flapling” a more powerful flyer.

Soft Tissue Preservation
Despite a flipped mandible and poorly preserved feet, the “flapling” is otherwise well preserved and largely articulated. A soft tissue stain can be seen (overprinted in Fig. 1) that demonstrates a narrow chord at the elbow wing membrane construction.