It’s rare when body fossils and ichnites are found in the same fossil beds. Gwyneddichnium (Bock 1952, the ichnite, Fig. 1) and Tanytrachelos (Olsen 1979, the body fossil) are exceptions. Found in the Appalachian valleys of Virginia, these relatively small, middle Triassic specimens both help piece together and integrate the trackmaker and the track itself. 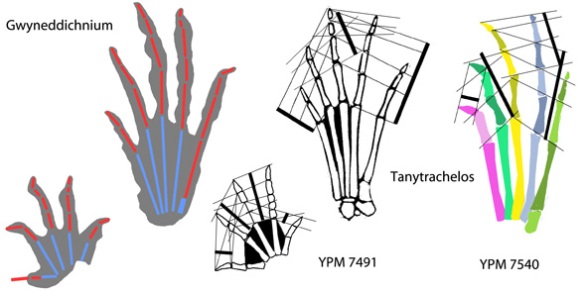 Comparing Gwyneddichnium to Rotodactylus
Gwyneddichnium demonstrates that pedal digit 5 in Tanytrachelos was oriented alongside digits 1-4 in a plantigrade configuration. By contrast the pes of Cosesaurus was matched to the digitigrade ichnite Rotodactylus (Peters 2000), which inverts digit 5, impressing far behind digits 1-4 without making a heel impression. online story.

Figure 3. Foot bones attributed to Tanytrachelos. Note the great similarity between these phalangeal proportions and those of YPM 7540. Metatarsal 1 was shorter in this specimen.

Adding the Pes of Tanytrachelos to the Large Ptero Tree
A lone pes attributed to Tanytrachelos from the same formation was added to the pterosaur tree. The foot nested with Tanytrachelos.