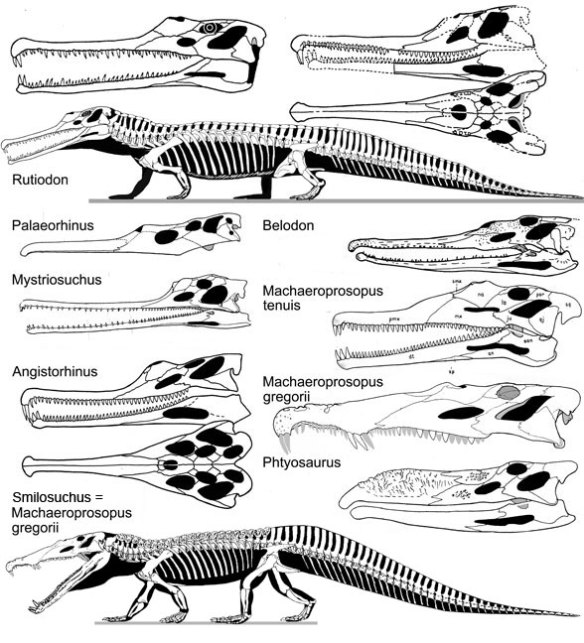 The Latest Nesting
Nesbitt (2011) provided the latest and largest published tree. He nested phytosaurs as derived from Euparkeria and basal to two clades within the Archosauria. Ornithosuchidae was at the base of one branch and pterosaurs were at the base of the other.

It’s puzzling how aetosaurs, pterosaurs and Scleromochlus made earlier lists. They bear little to no resemblance to phytosaurs. It’s also noteworthy that there has been little consensus in prior studies.

It’s a shame that so many earlier studies eschewed generic taxa for suprageneric taxa. The mysteries remained mysteries. Sister taxa did not share many traits. The large study sheds light on the relationships of phytosaurs and all of the members of the Reptilia. 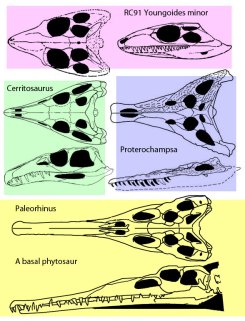 Given All These Choices Where Does the Large Study Nest Phytosaurs?
Unfortunately only skulls are known for the closest sisters of phytosaurs. Those who nested Proterochampsa with phytosaurs were correct, as confirmed by  the large study. However, nobody mentioned Cerritosaurus, the phytosaurs’ other sister taxon. At the base of all three nests Youngoides minor. It lacks an antorbital fenestra. The Choristodera are also sisters and Doswellia is at the base of that large and varied clade. Chanaresuchus and its sisters are related beyond Cerritosaurus.

A skull that is wider than tall is also a shared trait. The rostrum is elongated. The top of the skull is narrower than the base at the jaw joint. The top of the skull is flat across the upper temporal fenestra. The orbits are elevated or on top of a flattened skull. The postfrontal and postorbital are fused. An antorbital fenestra developed independently in this clade. Phytosaurs share with chanaresuchids a skull longer than half the presacral length of cervicals. Certainly many of these traits find convergence elsewhere on a tree where convergence runs rampant. Even so, the rules of parsimony place phytosaurs with these pararchosauriformes and the clade is a sister to the euarchosauriformes.