The IVPP 13758 pterosaur egg and embryo were the first to be described and illustrated (Wang and Zhou 2004, Fig 1 far left and near left). Unfortunately the tracing of the specimen was crude, the reconstruction was off and the identification was mistaken.

A new tracing (Fig. 2) was made without seeing the specimen, but rather employing DGS (digital graphic segregation) based on two published photographs of the plate and counterplate of the split fossil digitally layered and rematched to each other. No other technique permits the plate and counterplate images to coincide as originally found. Every element of the skeleton was identified, all symmetrical elements match and the specimen shares a suite of traits with sister taxa. 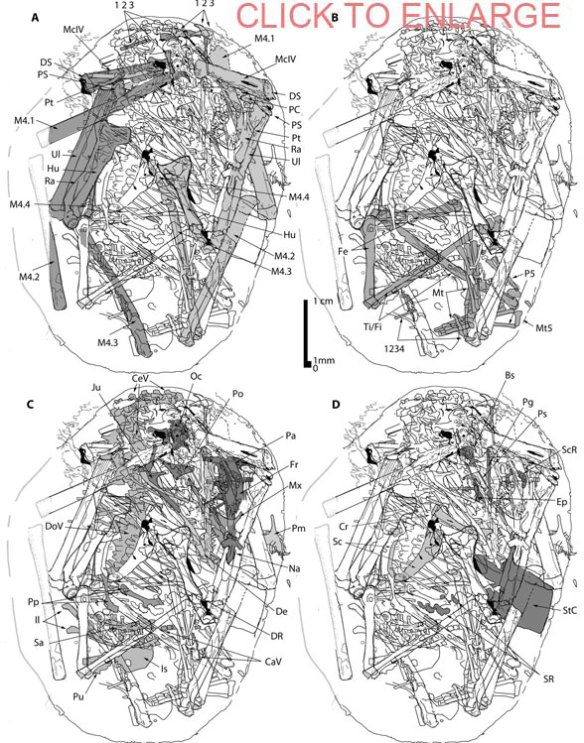 Figure 2. Click to enlarge. A magnitude of more detail was gleaned from this fossil (the IVPP egg/embryo) using the DGS method. The jumble of bones is difficult to deal with, but the DGS method enables the segregation of certain bones from one another. Upper left: wings. Upper right: legs and feet. Lower left: skull, pelvis and axial elements. Lower right: Sternal complex, pectoral girdle, palatal elements.

It’s BIG Baby!
To add a twist to this puzzle, this embryo is the size of other adult anurognathids. That means the adult, at 8x larger (based on pelvic opening and eggshell diameters) was several times larger than the largest commonly acknowledged anurognathid. We don’t have an adult of this anurognathid, but we do know from Pterodaustro, Pteranodon, Tupuxuara and Darwinopterus that the hatchlings and juveniles were virtually identical to adults in all pterosaurs, crests and all.

Figure 5. The IVPP embryo scaled to an adult size (based on matching the egg to the pelvic opening diameter, along with various views of the skeleton and an egg and hatchling.

Now to Describe This New Anurognathid
The skull is unknown in the three more primitive sister taxa. Distinct from Dimorphodon, the skull of the IVPP embryo had a smaller naris but was otherwise quite similar. The postorbital was larger. The dentary teeth were relatively larger. The cervical neural spines were shorter. Approximately 10 vertebrae were sacrals. The caudals were reduced to a vestige. The sternum was rectangular. The scapula was shorter. The coracoid ventral stem was not expanded. The metacarpus was longer than in sister taxa. Manual 4.4 was relatively shorter. The pelvis was relatively larger. The ischium and pubis was notched and the ischium was broad. The hind limb and especially the tibia was longer. Pedal 5.1 did not extend to the tip of metatarsal IV.

A Derived Species of a Primitive Clade
The IVPP embryo was a basal protoanurognathid (if Dendrorhynchoides is considered the basalmost anurognathid), yet it survived into the Early Cretaceous. It retained an elongated Dimorphodon-like premaxilla that was V-shaped in palatal view, but it also had a rather elongated metacarpus, whereas most other anurognathids, like Batrachognathus, shortened theirs. The IVPP embryo also had an elongated neck, more like Dimorphodon than Dendrorhynchoides, Peteinosaurus or any of its closests sisters. Thus, the elongated neck, like the elongated metacarpus, appears to be derived. The relative brevity of the toes is matched only by D? weintraubi, another larger-than-normal anurognathid from the Early Jurassic of North America.

And the Eggshell
The eggshell was thinner than in any archosaur or archosauromorph (Deeming and Unwin 2007) and most like that of lizards able to retain the embryo until just before hatching. All current evidence indicates that pterosaur mothers carried their single embryos until just prior to hatching. How ridiculous would it be to expect humming-bird-sized to fly-sized tiny hatchling pterosaurs to crawl through sand or mud after being buried prior to hatching, as Deeming and Unwin (2007) and Grellet-Tinner et al. (2007) proposed under the disproven archosaur paradigm (Bennett 1996b). Tiny pteros were not as tough as little turtles and crocs. Think of their fragile wing membranes.