Part of a Private Collection Made Public
There is a tiny little anurognathid pterosaur in a private collection that Dr. S. Chris Bennett (2007) described as a small Anurognathus ammoni (Döderlain 1923). Here that specimen was found to nest next to Anurognathus, but it was neither conspecific nor congeneric with Anurognathus. It was distinct in morphology from flat head to tiny toe. It actually shares more characters with it phylogenetic predecessor,  Dendrorhynchoides (Ji and Ji 1998 ), including a very wide sternal complex and torso. While most pterosaurs had long pointed jaws and most anurognathid pterosaurs had a round, bubble-like skull, this particular anurognathid had the flattest, widest, most pancake-like skull of all. The eyeballs would have popped up above the skull outline, like a frog’s eyeballs. Figure 1 portrays both anurognathids to scale. The many differences are easy to see. Let’s run through them.

Figure 1. The flat-head pterosaur, a private specimen (on the left) attributed by Bennett (2007) to Anurognathus ammoni (on the right).

The Skull
The skull was described by Bennett (2007) as having an enormous orbit in the anterior half of the skull, little to no antorbital fenestra, and a broad set of parietals with widely spaced upper temporal fenestra among several other autapomorphies. (You can view those illusory interpretations here). No sister taxa have these traits. Nevertheless, this false and frankly, goofy to monstrous reconstruction has become widely accepted. Such a reconstruction replaces the large air-filled antorbital fenestra of all other pterosaurs with gel-filled eyeballs. Such a reconstruction moves the eyeballs into the anterior half of the skull, the opposite of all other pterosaurs. Bennett (2007) mistook the curved and dentally subdivided maxilla for a giant sclerotic ring preserved on edge, which no other crushed specimen of any tetrapod ever does. Bennett (2007) was unable to segregate the layers of bones so reconstructed a wide, flat parietal, the opposite of all other pterosaurs. Here DGS (digital graphic segregation) was able to delineate all the skull bones recovering identical left and right elements that resemble those of sister taxa and produce a reconstruction in line with sisters, rather than completely different as in the Bennett (2007) reconstruction (see both here).

Figure 2. At left the traditional Bennett (2007) interpretation. On the right, interpretation based on finding and tracing paired bones.

The Post-Crania
The rest of the skeleton was much more typical of anurognathid pterosaurs. The cervical series was relatively longer than in Anurognathus. The torso was not as wide as in Dendrorhynchoides and the dorsal ribs were more gracile. The caudals were greatly reduced. The sternal complex was not quite as wide. The pteroid was smaller. Bennett (2007) determined that manual phalanx 4.4 was missing, but it is largely buried. The distal portion reappears at the pelvis and all sister taxa have four long wing phalanges. Pedal digit 2 is not the longest. The proximal pedal phalanges had more typical proportions than the short ones in Dendrorhynchoides. 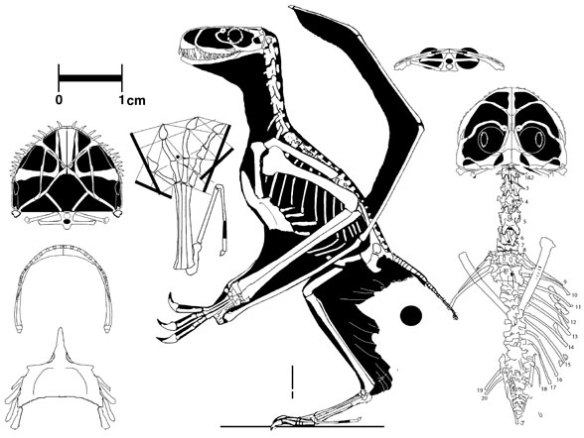 Why The Wide Face?
Obviously the wide flat skull gave the private specimen some sort of competitive advantage. Certainly the wider gape captured more tiny insects. The disc-like shape, like a flying saucer, may have been raised and lowered in the airstream to affect the flightpath and such a shape reduced aerodynamic drag while streamlined in the neutral position.

Think About the Size of the Egg!
With such a tiny pelvic opening, the egg of the private specimen would have been very tiny, on the order of 3-4 mm in diameter. The hatchling would have stood one-eighth as tall as the 6 cm adult or less than 8 mm in height (possibly taller if the egg was elongated).  Such a fly-sized pterosaur risked desiccation if it flew in dry air, so it may have scurried about in damp leaf litter snatching insects on the ground as a juvenile.