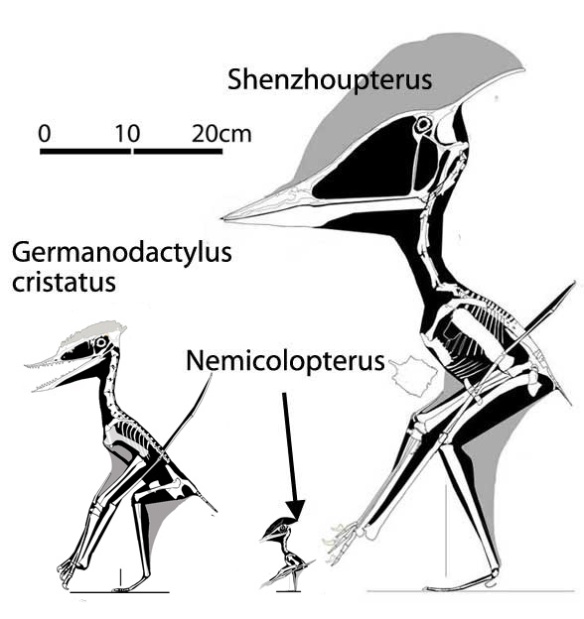 Nemicolopterus crypticus IVPP V-14377 (Wang et al. 2008) ~120 mya, Aptian, Early Cretaceous, ~25 cm wingspan, was a very tiny pterosaur, but to the credit of its describers they considered it a sub-adult rather than a hatchling. Derived from a sister to the much larger Germanodactylus critatus, Nemicolopterus was a sister to the much larger Shenzhoupterus. The skull of Nemicolopterus was more gracile, with a large orbit and a larger cranial crest without any rostral crest. A minor dentary keel was present. No teeth were present. The cervicals were robust and not elongated. The dorsals were compact. The ribs and gastralia were horizontally oriented creating a wider than typical torso. This is reflected in the wide shapes of the scapulocoracoid and the sternal complex. The sternal complex was over three times wider than long. The laterally directed coracoid produced a “bottom-decker” wing. The forelimb was more robust, but the wing and fingers 1-3 were not. The hind limb was shorter. All four metatarsals were subequal. Pedal digit I was elongated such that all four unguals were aligned. Pedal digit 4 extended the furthest from the heel. Perhaps the small size of Nemicolopterus is yet another example of size reduction during a morphological change from one large taxon (Germanodactylus cristatus) to another even larger taxon (Shenzhoupterus). It would be good to find more transitional taxa in the future.

Figure 2. Nemicolopterus has been described as the smallest pterosaur, but No. 6 in the Wellnhofer (1970) catalog was only half as tall.

Shenzhoupterus chaoyangensis IHGM 41HIII-305A (Lü et al. 2008) ~120 mya, Aptian, Early Cretaceous, ~4.6 m wingspan. Shenzhoupterus was the largest representative of this lineage and lived at the same time as Nemicolopterus. The skull of Shenzhoupterus had a taller antorbital fenestra, a taller subdivided orbit and a thinner, longer posterior crest. The scleral ring occupied the top portion of the subdivided orbit, so was relatively much smaller. The mandible was deeper. The cervicals were elongated and quite gracile. The torso was deep, short and compact, almost spherical. The sacrals equaled the dorsals in length. The caudals were vestigial. The sternal complex was square. The humerus extended to the pubis. The wing was gracile. The pelvis was larger and the prepubis was much deeper. The hind limb was longer and more robust. Pedal digit I was short, as in Noripterus, and the ungual did not align with II-IV.

The original reconstruction (Lü et al. 2008) of the skull simply traced an outline of the chaotic bones en masse (including the sternal complex, which is under the orbit!!!). They also overlooked the long posterior crest. Click here to see a DGS (digital graphic segregation) of the posterior skull elements. The subdivision of the orbit is a trait also seen in dsungaripteridae by convergence. The short round torso is also seen in Tupuxuara by convergence.