You Can Call Them “Bubbleheads”
because there was more air than bone in their fragile round skulls than bone, but anurognathids (Figure 1) were important members of the pterosaur family tree (see below). Our last stop-off was the protoanurognathid, MCSNB 8950, which retained a robust tail.

The IVPP Embryo
The most primitive anurognathid, the IVPP embryo, is also the most controversial because it is an embryo the size of most of the other adult anurognathids. That means an adult would have been eight times larger (pretty standard growth to full size, based on egg size vs. pelvic opening). The IVPP embryo, IVPP V13758 (Wang and Zhou 2004), was originally considered a baby ornithocheirid. Further studies and an accurate reconstruction revealed its true identity. It is the most primitive anurognathid to have a vestigial tail.

Figure 2. Click to enlarge. Dimorphodon weintraubi made the cover of Nature

Dimorphodon? weintraubi
The only other “giant” anurognathid is the mislabeled “Dimorphodon” weintraubi, (Clark et al. 1994, 1998) made famous on the cover of Nature (Figure 2), as the specimen that “proved” all pterosaurs were flat-footed because the metatarsophalangeal joint was a squared-off butt joint. Not true.  Peters (2000) matched the morphologically similar foot of Cosesaurus to Rotodactylus, fairly common digitigrade tracks in which digit 5 impressed far behind the other four toes and the proximal phalanges were elevated. So the butt joint kept the proximal phalanges elevated in fenestrasaurs, including basal pterosaurs. This is the only known western hemisphere anurognathid. Unfortunately it is only known from its limbs.

Dendrorhynchoides curvidentatus
The most primitive of the small anurognathids with small tails, Dendrorhynchoides (Ji and Ji 1998) is a complete specimen with soft tissue impressions. A false tail (perhaps from a tiny dinosaur) was added to the holotype by the preparators. I bought into that fake tail because a robust tail would have been similar to the next most primitive pterosaur, MCSNB 8950. However, the IVPP embryo demonstrates reduction to a vestige, and the same would hold true for Dendrorhynchoides. I found it on my computer screen using the DGS method. The tiny tail curled around the left tibia before passing anteriorly over the left femur and ventral pelvis. Dendrorhynchoides had an extremely broad sternal complex, which made its torso twice as wide as its skull. The palate is a good precursor to the palate in Jeholopterus, but without the robust architecture needed by the vampire.

Hone and Lü 2010 reported on a new specimen of Dendrorhynchoides, GLGMV 0002, but a DGS tracing and reconstruction reveal it to be a non-anurognathid, perhaps a specimen close to Dimorphodon.

The Flathead Anurognathus?
Controversy also surrounds the private (SMNS has casts and photos) specimen that Bennett (2007) attributed to Anurognathus. The “Flathead” specimen is complete and much smaller than the holotype Anurognathus. While the “Flathead” nests as a sister to the holotype, it had a different skull architecture, neck length, relative body size, a much smaller metacarpal 4, different femur/tibia ratios and the list goes on. Why would Bennett (2007) consider the “Flathead” an immature specimen if the skull was relatively smaller and the neck relatively longer? Paleontologists, as a rule, consider it inappropriate to publish on private specimens, but Bennett (2007) reported that the “Flathead” was merely a second specimen of an already established genus and species. Bennett (2007) also completely misunderstood the skull architecture, as documented here. Bennett (2007) mistakenly placed the eye in the antorbital fenestra after confusing a displaced maxilla subdivided with tooth roots with a “sclerotic ring” preserved on edge somehow, not noticing that his eye bones had tiny teeth. The “Flathead” specimen had a much wider than tall skull with extremely fragile bones connecting the skull roof to the jaw line. The palate bones were also extremely thin, with fragile Y-shaped extensions of the maxilla touching medially and extending posteriorly. Like Dendrorhynchoides, the torso was much wider than tall, but the sternum was no wider than the skull.

Anurognathus ammoni – the holotype
Anurognathus ammoni (Döderlein 1923) B St 1922 I 42, No. 111 of Wellnhofer 1975, was the first anurognathid discovered. Some of the bones were preserved. Others are only impressions. As in Dendrorhynchoides, the distal wing bones curled toward the body, leaving Bennett (2007) the impression that they were missing because he did not see them. The DGS method found the distal wing phalanges in these taxa. Moreover, derived anurognathids, like Batrachognathus and Jeholopterus, also have distal wing phalanges, so it would not be likely that they would redevelop after complete loss.  Anurognathus had a longer rostrum and shorter neck than other anurognathids. The sternal complex was small and pentagonal. The femur was about half the length of the tibia.

Figure 6. The CAGS specimen attributed to Jeholopterus. Click to enlarge.

Jeholopterus? the CAGS specimen
Jeholopterus? sp. (Lü et al., 2006) CAGS IG 02-81 was originally considered a Dendrorhynchoides then a Jeholopterus specimen. It was distinct from both. It had large eyes. Unlike Batrachognathus the eyes were oriented more laterally. The skull was muffin-shaped, wider than tall. The nares opened anteriorly and the premaxilla was largely transverse. The pelvis was quite small and the femur was relatively longer. The sternal complex was the width of the skull. Some excellent soft tissue here obscures some of the bones. Distinct morphology suggests this specimen deserves its own genus. 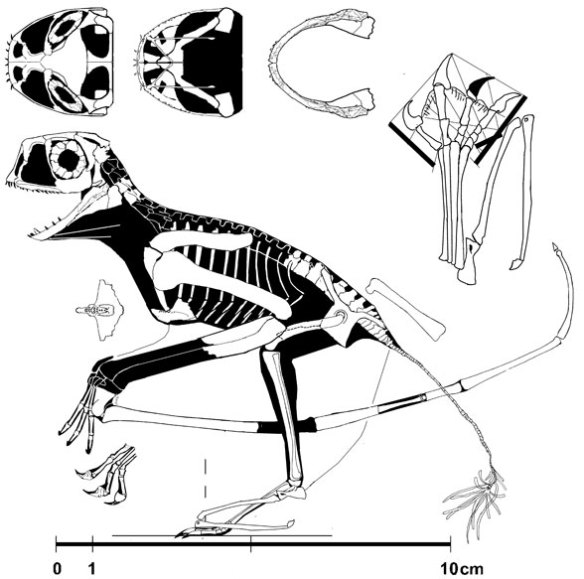 Next we’ll take a look at the base of the Eudimorphontia.

As always, I encourage readers to see the specimens, make observations and come to your own conclusions. Test. Test. And test again. 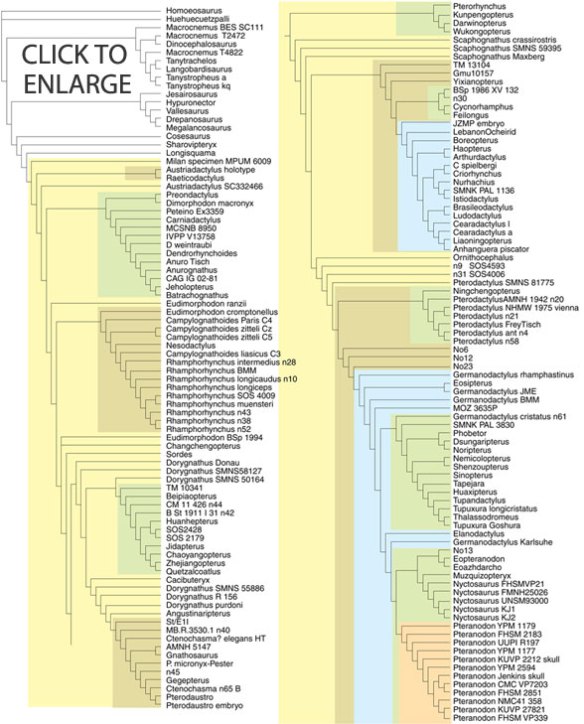