Just another anurognathid?
Jeholopterus – IVPP V12705 (Wang et al. 2003) Late Jurassic/Early Cretaceous was a highly derived anurognathid with excellent preservation of bones, wings and other soft tissues, such as hair (pycnofibres). The enormous curved claws (like surgeon’s needles), the robust limbs, plus the powerful feet (like can openers) were easy to see and distinct from those of most anurognathid pterosaurs.

Figure 1. Click to enlarge. Comparing data gathering results using first-hand observation with the DGS method on the skull of Jeholopterus.. The digital outlines were then transferred into the reconstruction.

DGS solves the mystery of the skull.
First-hand observations of the black, crushed skull of Jeholopterus resulted in a disappointing broad outline offering no possibility of a reconstruction (Figure 1 inset). On the other hand, the DGS (Digital Graphic Segregation) method was successful in segregating the chaotic jumble into separate bones (Figure 1). These could be digitally reconstructed into a skull (Figure 2) in which all the parts had symmetrical counterparts and all the parts fit precisely. DGS also enabled tracing of the tail from beneath various soft tissues. Note the palate bones had slid to the left toward the wrist and digit 1 of the right hand (in orange-red) was dislocated on top of the skull.

Figure 2. Jeholopterus in lateral view. This image supersedes others in having the coracoids extending laterally and other minor modifications.

The reconstructed skull had an architecture that followed the patterns of other anurognathids (such as Anurognathus and Batrachognathus),  but with several important distinctions. Added together these traits  create  what appears to be our best candidate for a vampire pterosaur (Peters 2003). By all appearances, Jeholopterus was built to latch on to a dinosaur and sink its fangs between the tough scales and beneath the outer skin, probably at the most vulnerable corners and crevices. Here’s how the vampire hypothesis was put together, trait by trait.

The highly derived skull.
While the skull of Jeholopterus followed the pattern of other anurognathid pterosaurs, it also was quite specialized for its unique diet.  Jeholopterus had lost almost all of its upper teeth. Only a few stubby premaxillary teeth were present, but these were spanned by two large curved maxillary fangs. Moreover, these fangs were mounted on an upwardly curving jaw line, at right angles to the (atypical for pterosaurs) anteriorly leaning jaw joint. That jawline curve created the possibility of an enormous gape, similar in arc and shape to that of a rattlesnake. And we all know how a rattlesnake bites.The lower jaws rose up anteriorly to match that upper curve. The dentary teeth were no larger than the “teeth” on a pair of pliers, unable to pierce prey. 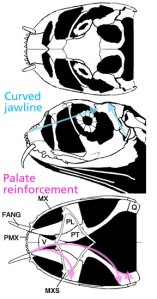 The vampire skull in action.
Anurognathid skulls were very fragile (less bone and more air than a typical pterosaur) and Jeholopterus was no different. Unusual for anurognathids, Jeholopterus had a robust palate reinforcing the roots of its twin fangs (Figure 2). The palate bones (vomers, ectopalatines (=fused ectopterygoid and palatine) and pterygoids) were shaped and arranged to distribute the forces of impact  from the front of the jaws to the sides and rear. Such an architecture tells us that Jeholopterus was banging its fangs on prey, probably to penetrate tough hide. The enormous gape permitted the lower jaw to get out of the way to maximize penetration. After the stabbing, the skull could roll forward, locking the fangs horizontally beneath the skin for maximum adhesion. With the jaw joint now elevated, the mandibles could close down on a  rise of skin behind the wound to “milk” the blood out. Remember, the lower teeth were incapable of penetration.

Surgeon’s needles for claws.
The robust limbs and extra-large claws could have been used to hold on to the bucking victim without getting shaken off. Adding the fangs made a total of five points of adhesion. The lengthening of metatarsal 5 provided more leverage for digit 5 to press against the victim’s skin, enabling toe claws 1-4 to flex and dig in deeper like an old-fashioned church key can opener. What more could a vampire pterosaur want?

How to deal with the inevitable flies.
Since Jeholopterus would have been immobilized by its fangs and claws while feeding, it would have been defenseless against biting insects also attracted to the blood. To keep insects away, the pycnofibres (pterosaur hairs) were extra long and the tail could have been whipped around, like a horse’s tail to keep flies from landing.

The origin and evolution of blood-sucking in anurognathids.
The origin of vampirism in anurognathids was probably not much different than its origin in bats and vampire birds, including tickbirds. Anurognathids are widely considered to have been airborne insect-eaters due to their wide gaps and fragile skulls. Various insects, like flies and their maggots, are attracted to wounds on large mammals and we can presume that dinosaurs also carried bloody wounds at times. Anurognathids would have been attracted to such accumulations of blood-loving insects. Some anurognathids might have been attracted to the blood itself. A few, such as Jeholopterus, apparently skipped all the preliminaries and created its own wounds on dinosaur prey.

For those who don’t like technology
While the DGS/Photoshop technique has attracted a fair number of naysayers, the results should speak for themselves. The tracings of the bone in Jeholopterus revealed matching paired elements. Those were digitally transferred to the reconstruction and every bone fit. The bone shapes were similar to those in sister taxa. This is contra the results of Bennett (2007) who was unable to identify several bones and misidentified others using a camera lucida on a private anurognathid specimen. He reconstructed a monster skull unlike that of any other anurognathid.

Response to a criticism
Kellner et al. (2009) wrote: “Right after the description of J. ningchengensis by Wang et al. (2002), Peters (2002) argued that the wing membrane in the Chinese taxon did not reach the ankle but extended only to the elbow. However, despite the fact that no trailing edge of the posterior portion of the plagiopatagium is clearly discernible, an extensive portion of soft tissue that is attributable to the wing membrane is closely associated with the hind limbs, particularly with the tibiae (figure 3a). Apparently, Peters (2002), who based his studies on photographs, has only identified the limits of the actinopatagium that indeed terminate at the articulation of the humerus with radius and ulna, but the tenopatagium extends up to the ankle.” Below is their figure 3a, along with the complete plate. Yes, there is fossilized soft tissue there, as elsewhere around the bones (green areas). A closer look at the area shows the fibers near the left tibia are layed out in several directions, not just in the direction of the wing. Moreover, contra Kellner et al. (2009) the trailing edge of the wing is clearly defined (in yellow) all the way to the femur and identical to the wings of other distantly related pterosaurs, like Pterodactylus. Kellner et al. (2010) merely labeled areas within the fossil without defining borders of their hypothetical membrane, making sure that their closeup image did not include the trailing edge of the wing membrane that Peters (2002) had identified. 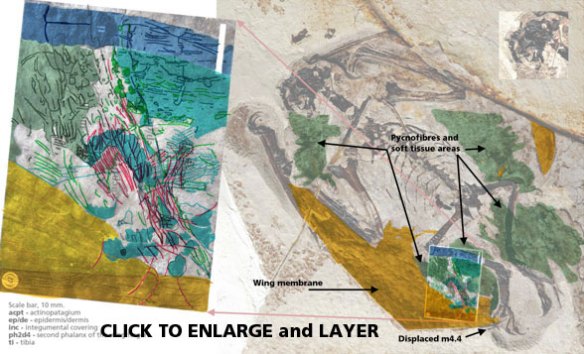 Figure 4. Click to enlarge. The purported tenopatagium of Jeholopterus. Note Kellner et al. 2010 cropped out the key portion of the trailing edge of the wing membrane that documents how narrow the wing becomes aft of the elbow.

10 thoughts on “Jeholopterus, the Vampire Pterosaur”